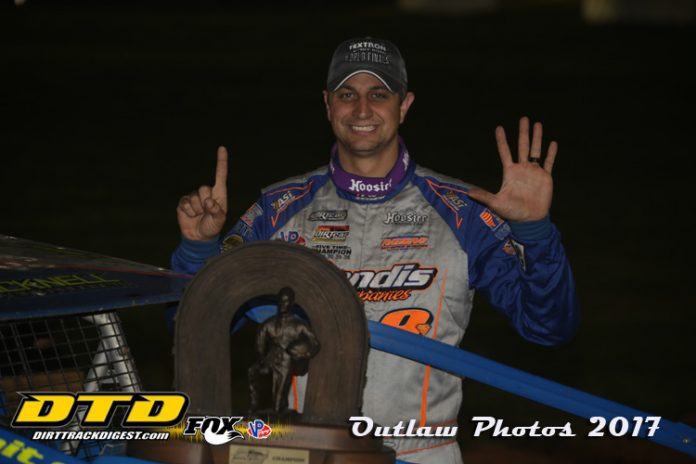 When Matt Sheppard lost three points races for the Super DIRTcar Series at the beginning of the summer many thought his opportunity to win championship was over. Not Sheppard or his team. They never quit. They overcame a nearly 200 hundred point deficit to claim a sixth series championship.

“This is unbelievable,” said Sheppard. “We got sat down for three races and to come back and win the championship is just unbelievable. The wins, just winning everywhere, all the time. It’s going to be a tough season to replicate.”

The championship wasn’t a lock coming into the final point race of the season on Saturday at the World Finals at The Dirt Track at Charlotte. Sheppard had a mere 37 point lead over Billy Decker. Sheppard left no doubt as he went out and won the feature to tie his own record to finish with 12 series wins on the season.

“I feel like that it’s fitting with the season we had to win the championship,” commented Sheppard. “Billy never makes it’s easy. Me and him have been battling for championships for years here. They had a strong weekend, we just had a little bit better weekend.”

Sheppard ended the season with 41 feature wins, another career best for the Waterloo, N.Y., driver. Last year he was close to the 40 plateau and this year adding in the Outlaw Speedway helped put him over the hump. He had a winning percentage of over 50 percent.

“It’s going to be hard to ever top this,” stated Sheppard. “41 wins and I don’t think we ran 80 races. It is unbelievable. Numbers wise, percentage wise, I don’t know if there has ever been a better season. It’s remarkable, especially in this day and age when everyone is basically in the same equipment. To win that many races is special for us.”

Sheppard would have had 42 wins on the season had he not made a rare mistake in Friday night’s feature at Charlotte. He made sure not to do that again on Saturday. He restarted on the outside and kept Keith Flach in check on each and every restart.

“I guess I like to think learned my lesson from yesterday,” commented Sheppard. “I think if we restarted on the top yesterday I would have won both of them. Keith (Flach) is a good, clean racer. You are putting a lot of trust in the guy on the bottom to wait for the leader to fire and they don’t always do that. Thankfully Keith is a clean racer, respectful racer and that was the difference there.”

With the title in hand, Sheppard will now head home from another successful World Finals. He’ll take a brief break before getting back to work in preparation for 2018. As of now, he’s not sure what his plans will entail.