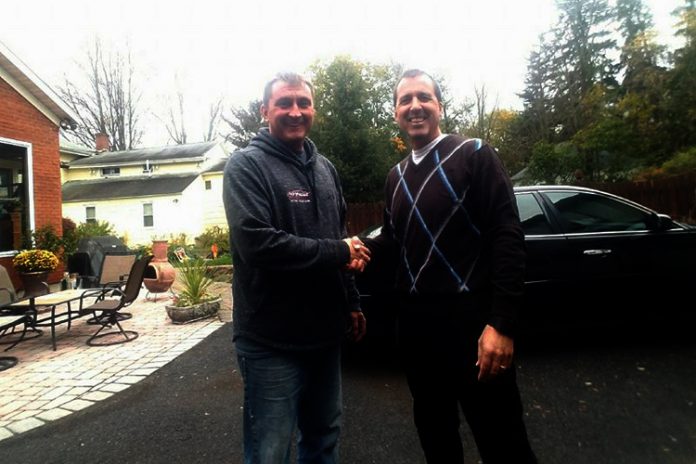 Jeremie Corcoran continues to build his racing portfolio post promotion of the Canandaigua Motorsports Park. In the last year Corcoran added Syracuse Stadium Cross, Syracuse Snocross as well as the Northeast Racing Products Auction, Trade Show and Swap Meet. Now he’s got one more thing on the agenda in March as he’s also taken over the reins of the Syracuse Motorsports Expo from the Patrick family.

Corcoran has assisted the Patrick for years with annual show held at the New York State Fairgrounds. Due to a variety of reasons, the Patrick family has decided the time is now to step away from the show.  They made a call to Corcoran and a deal was reached allowing him to step right in as the new promoter of the event.

“It’s all positive,” stated Corcoran. “I’m excited to do this. This is what I looked at doing a year and a half ago when I knew I was going to be out of Canandaigua. This is a good thing. It’s going to be the same yet different. We are going to make some changes but the structure is there. The Patrick family is behind me 100% and I’m really excited about the opportunity.”

Although it means an exceptionally busy schedule for Corcoran in the month of March, he admits it fits his needs more than what he was doing before in weekly track promotion. He has the chance to spend more time with his family actually going to the races for enjoyment rather than the stresses of running a track on a weekly basis.


“As I said before, this is good for me and my family,” commented Corcoran. “I’ve been doing weekly stuff for years and what I’m doing now has something to do with racing but it isn’t the weekly grind. This is a lot of stressful. This is something I’ve always wanted to do. We’ll do these events and then have the summer to go racing. It’s something my wife (Lori) loves to do, my kids love to do. It’s a family thing.”

The show remains on the same weekend in early March. He’ll have more information once he completes the trade show next weekend, November 17 and 18. He’ll also be looking for ideas on how to enhance the show. He has some changes in mind but also will look for outside opinions in order to meet the needs of those that attend.

“I’m hoping for some opinions of what people want to see in today’s society,” he said. “We can’t do everything the same. One thing I’m looking to do is get more diverse with the show. Motorsports encompasses more than just circle track racing. We need to make sure other forms of motorsports are represented as well like drag racing, mud bogs and dirt bikes. You see the tracks doing that as well and I think in today’s society that is the way we have to go. Other than that, I’m open to ideas on how to make it better for everyone involved.”

Corcoran indicated a new website will be launched in the coming weeks which will include all the information for everyone looking to attend the show in March.