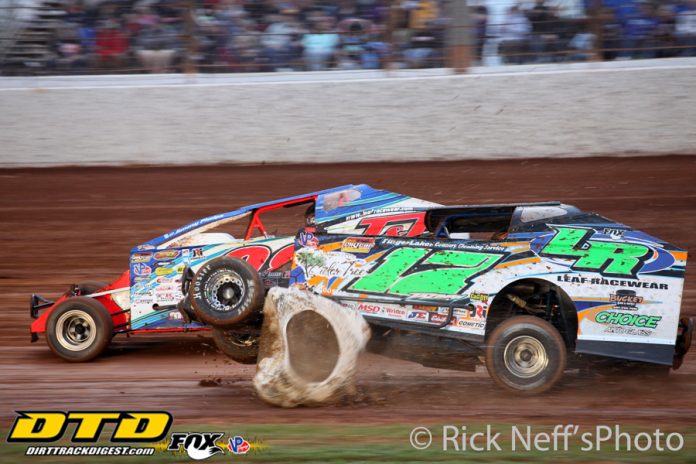 I’m having a case of “why didn’t I do this long before I did” blues.

For many folks year after year they have made the pilgrimage to The Dirt Track at Charlotte, but for me this was only my second time. Year three is in the planning stages.

Donny Schatz, Brandon Sheppard and Matt Sheppard celebrated on the podium as the sky filled with bombs and colorful pyrotechnics.


I was assigned to talk to Schatz and Sheppard and they were tremendous. The nine-time World of Outlaw Sprint champ just saw a race get away from him on the final lap because as he said, “I hesitated,” but he invited me in the hauler to talk about his championship season (and a little bit about the weekend).

Despite a tough night he still was classy and talkative. It was much appreciated.

Not only did he get passed on the last lap, but the win would have been his 250th.

Brandon Sheppard took time as he climbed out of his car and stood alongside. He saw lapped traffic ruin his quest to become the winningest in on season WoO Late Model driver. He had reason to blow off reporters questions. He didn’t.

These guys responded like champions do. They had a tough night, but were willing to talk about it.

Hey, they didn’t know me. I’m a Northeast writer who doesn’t regularly cover them, but I think they provided some insight into their quest for the title.

Not the Best Mod Race

Matt Sheppard did what everyone expected as he won the Super DIRTcar Series crown. He drew pole for the final night and was never seriously challenged as he finished off a season that in around 80 starts he had 41 wins. This was one of those seasons fans will talk about for years to come and it was indeed legendary.

However, the drive of the night had to be Jimmy Phelps as he started back in 26th and drove through the field for a 12th place finish. It might not seem like much, but for Jimmy he was battling Brett Hearn for fifth in the point standings (and it meant a difference of several thousand dollars). Phelps finished fifth behind Matt, Billy Decker, Larry Wight and Pat Ward.

Two of the top names in SDS had mechanical problems in times trials on Thursday and ran B-Mains all weekend. Hearn and Phelps never had a chance to relax. They, and their crews, busted their butts, as the cars started in the back of just about every race they were in.

Flach flipped here a year ago. On Saturday night he came home second to cap off a tremendous weekend.

Mike Mahaney capped off what had to be a frustrating season with a third as both him and Flach had top five, quick time and heat win weekends.

The Doctor was quiet throughout most of the weekend, but a well driven fourth on Saturday was pretty good. Down the stretch of the final feature of the year Mahaney, Johnson, Fuller, Britten were lined up chasing one another.

Wight got the wall, pitted made quick repairs and the third place finisher in the points came home 15th out of 29.

Gary Tomkins had lost a motor on Friday and noted, “We had two cars with us. Dave Rauscher attempted to qualify the other one with the understanding that if we needed it he would relinquish the seat. We moved the seat and steering wheel back to the way I had it, put the doors and quarter panels off the other car on it, scaled it and ran it. It was the first lap of the weekend in it for me. We were fast, but our right rear grew way more than I thought it would and the car got loose.”

They say they reconfigured the banking a bit at Charlotte during the past year. Well, it was fast and when the Sprints are out there it is amazingly fast.

Stuff happens and it happens quickly

A pile up in turn two saw Greg Hodnett get into the side of Jason Johnson and all hell broke loose. Before it was over, The Ragin’ Cajun had been hit at high speed by at least two other cars, Sheldon Haudenschild’s car was hanging on the wall, Jac Haudenschild was on his side and Kerry Madsen was also in the mix. It was a long clean up.

The final laps of what was the longest race of the weekend, as the first five laps took over a half hour, saw classic slide jobs with winner David Gravel and champion Schatz. What a way to end the season.

For Gravel it was win number 18 on the year while for Schatz he will still have to wait until Volusia for his 250th career win.

Seventeen year old Sadie Siegel had a violent crash in her first race. She is a rookie out of Lernerville and she was living her dream as she has attended the World Finals for years as a fan.

Her new helmet was cracked in the center of the back of it. It had cost her $600, but was a throwaway much like most of her car.

As she stood inside of her trailer signing pink frame pieces for the fans the helmet was their. It had some signatures on it and a crewman said, “She wanted to get it signed by all the drivers who were in her heat as this was very important to her. She was living her dream.”

Up to that point names emblazoned on the while helmet were Sammy Swindell, Sheldon Haudenschild, Dave Blaney, Kerry Madsen and Josh Baughman. While I was talking to her one of the crewmen went to get Logan Schuchart, Brad Sweet and Paul Nienhiser to sign it.

By the way, there was something good happening for her as she was accepted on Saturday morning at Clarion University where she will major in nursing. Sadie has a big heart as she was raising money for youngsters and their families fighting cancer this past weekend.

B-Mains for the Mods saw about 21 cars vie for the final four positions in the main. As so often happens this weekend the front row went to the A. Mike Maresca captured his second B of the weekend while Tyler Dippel captured the other. Also earning spots in the finale were Chad Jeseo and Jim Rasey…

Super DIRTcar Series drivers who ran the B’s and will need provisionals included Max McLaughlin, Jimmy Phelps, Brandon Walters and Billy Whittaker. Time trials simply have too much impact at this place. If you don’t fare well on TT night you are stuck and probably just chasing cars all weekend long. Walters had rear end problems and exited early…

Marcus Dinkins had a weird one as he caught a yuke tire in two and came to rest partway down the backstretch. He stood the yuke tire up and it started to roll. It kept rolling and guess what? It came back and hit Dinkins. Haven’t seen that before…

Joe August Jr. got off to quick starts in the B’s, but ended up falling further back as the race wore on…

Sammy Swindell was in a qualifying position in his heat, came out of the fourth turn on the final lap, lost power and lost the spot. He was done for the night as he couldn’t answer the bell for the B main…

If you like nicknames, the “North Pole Nightmare” Bill Balog has one to remember. He hails from Wisconsin…

It with the fans could go out on the track as when I stepped on to the frontstretch it was a downhill walk and the walk up the backstretch hill to get back to the media tent was pretty steep. I understood then why this place is just so fast…

Dust was a unique problem. Veteran fans said they’d never seen it like this. The Mod main on Friday made viewing parts of the track impossible…

How windy was it at Charlotte on Saturday night? Well I was up two rows from the top of the grandstand and had walked all the steps up with a sugar covered funnel cake in hand. I stepped out of the shadow of the suites and onto the grandstand walkway when a gust of wind blew my funnel cake away, over the rail and sailing down on the folks below. Oh well that is simply throwing six dollars to the wind…

Many thanks to Kim and Pete Andrella for being the “unofficial airport transit drivers” for DTD. Ironically, they saw Mike Mallett on their flight down and gave him a ride to the hotel. Sunday at 5:30 a.m. I was sitting in the lobby waiting for an Uber when Kim walked past, said “hi” and asked if I needed a ride to the airport. Nice folks. That’s what I love about race fans…

Dirt Track Digest committed itself to providing up-to-date information from the World Finals and thanks to the tremendous cooperation of drivers, owners and officials we are able to get fans at home (and some at the track) information that they might not be able to hear or read about. It’s what we do and as one of our team members said this weekend. Folks are reading and looking at the galleries so I guess this is a must cover event every year for us…

Well, it’s over. Many thanks to DTD for the writing opportunities and to everyone who I talked with over the long season. I can’t believe I was there at Volusia when the Outlaws kicked off the season as did the Late Models and Super DIRTcar Series and here I was at the final race for all three divisions…

Hopefully you have enjoyed one of the columns, stories or features that appeared this past season and we’ll do it again in ‘18…

Send off season information, news or comments to foley395@hotmail.com as I really enjoy hearing from our readers.