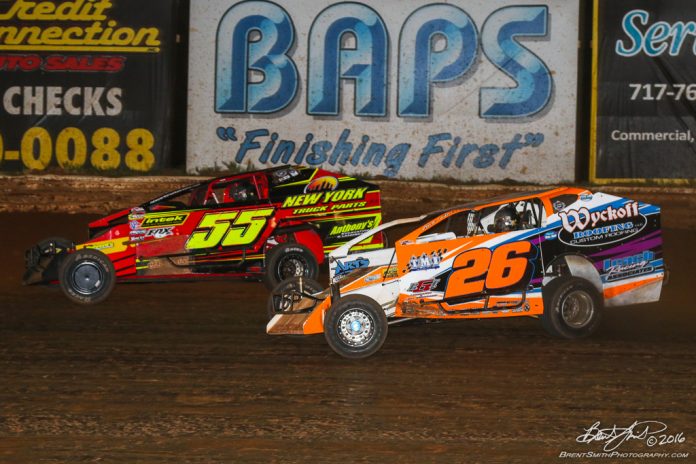 Susquehanna Speedway has undergone an amazing transformation the last two seasons under the ownership of Scott Gobrecht and general manager Kolten Gouse and its not done yet.

Late last week it was announced the speedway was set to undergo an even bigger change. BAPS Auto Paints and Supply reached an agreement to purchase the naming rights to the facility for the next five years with an option for five more on top of that. The track, for the foreseeable future, is now BAPS Motor Speedway.

The agreement continues the corporate involvement that began last year when cellphone company Sprint became a sponsor at the speedway. Gobrecht and Gouse think big and outside the box. They did so in this case and it worked out with another major deal for the revitalized facility. The deal is an amazing coup for the group as they aren’t necessarily the biggest name in the market with the likes of Williams Grove and Port Royal Speedway, but they keep proving that hard work pays off. “The corporate involvement has been really, really good,” stated Gouse when reached by phone by DirtTrackDigest.com. “Last year we were able to bring Sprint on board when they left NASCAR. I think that commitment will be further along in the next few years as well. This whole BAPS Motor Speedway and the transition from Susquehanna to BAPS is a big deal for us. The commitment to the speedway is for five years plus a five year option. Being able to land some of these corporate things is a huge for the speedway. It’s a testament to everyone that is involved at the speedway and BAPS. It shows that this is a partnership and it’s a big deal for everyone involved.”

Gouse indicated that this deal will allow them to do even more at the facility. The partnership guarantees them some stability in the years ahead. They’ve done a great job at the track of rewarding fans and drivers and this deal opens the door for even more going forward.

“It really gives the speedway a chance to be stable in sense that we able to do some different things,” commented Gouse. “We are able to gear more stuff at fans. We can gear more stuff at teams and we’ll be able to do some things that before we weren’t able to do.”
The facility has undergone an amazing turn around under the new ownership and that hard work has helped bring more and more sponsors in for the facility. The track has been resurfaced, the pit area expanded, new bleachers installed as well as a new sound system along with numerous other improvements. There are more coming as well.

“It’s come a long ways,” mentioned Gouse. “I think we are ahead of schedule. A lot of the success and where the speedway is going is because we have a great group of people around us. The businesses, employees, volunteers and even the township and community are all invested. There are so many people that are just driven to see this speedway succeed and progress. I’d say we are definitely ahead of schedule. That is definitely a testament to all the people that are involved in this place. It makes everything worthwhile.”

Although the name will change, the speedway’s 2018 schedule should look much like it did in 2017 with the Super Sportsman highlighting the Saturday night events along with the Late Models, Street Stocks and Extreme Stocks. Sprint Cars will also continue to be a mainstay on the schedule.

“Our Saturday night program is still going to be the Sportsman, Late Models, Street Stocks and Extreme Stocks,” cited Gouse. “That is kind of our core divisions that we run every Saturday night. We have some others that come in and out. Our Sprint Cars have always been once a month for the most part. Next year we might try a couple more races here and there as long as the scheduling allows. We try to work really hard with race tracks and sanctioning in this area. We’d like to have more 410 races. I know those guys love coming and supporting them. Our main divisions will be on Saturday nights. We’ll get into some other stuff with USAC or All Stars, but our core stuff will be our Saturday night divisions.”

Besides Sprint Car racing, Gouse will make sure the Modifieds will be back in 2018. Gouse and company feel the Modifieds are a must at BAPS Motor Speedway. For several years the Modifieds were the headline division at the track. With such a rich history, when the new owners took the helm they thought bringing back the Modifieds was a must.

“Susquehanna Speedway has always been enriched with Modified racing,” commented Gouse. “Vince Vicari and some of the guys that had this place years ago, Modifieds were the weekly division. It kind of got away from Susquehanna for a number of years. The track lost something when they weren’t there. There was something special with the Modifieds.” Gobrecht and Gouse met with Short Track Super Series promoter Brett Deyo prior to the 2016 season and the York County Nationals was born. The event has grown to include a nice $10,000 payday for the winner. That cash was taken home by Erick Rudolph after great battle with Stewart Friesen this past season.

“We put together a one race deal in 2016,” said Gouse. “It actually got rained out and pushed back, but it put on such a great race. It was one of our top five best races of the year that season. The culture, the fans, the teams and all the excitement that the Modifieds brought back to Susky, we knew we had to bring them back again. Over the winter going into 2017 we all got together and had to make this even more special. We put the $10,000 to win race on and this year it was unbelievable. The guys that traveled in, the support, the fans and it was another good race. It was another top five race of the year with Stewart Friesen and Erick Rudolph.”

Gouse indicated the speedway is currently working on its 2018 schedule in regards to the Modifieds. No dates have been confirmed, but Gouse hopes to build on what they’ve been able to accomplish the last two seasons.

“Hopefully in 2018 we can continue that tradition and build on that,” stated Gouse. “The Modified guys are so loyal and so dedicated, they are just like the Sprint Car guys in this area. To have them a part of BAPS Motor Speedway is such a big deal. People talk about the Modifieds so much, so having them on the schedule is essential.”

Things continue to come together for BAPS Motor Speedway. The facility is quickly becoming one of the hot spots in Central Pennsylvania as well as the entire Northeast. The track has moved forward by leaps and bounds the last two years. The partnership with BAPS is just another positive step for the historic track with more to come in the near future.