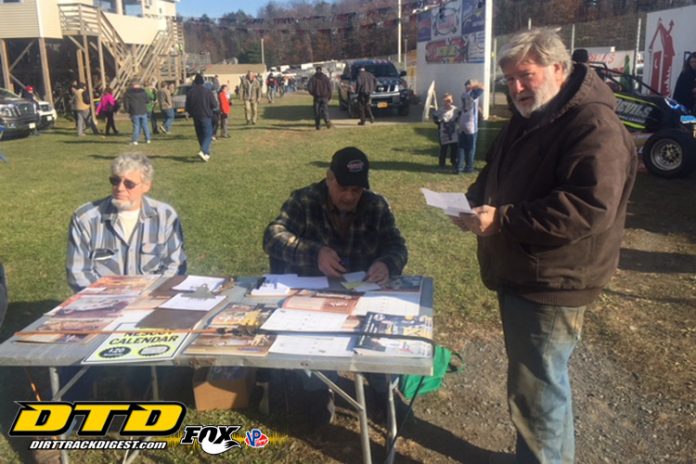 Who would think that on November 25th, at Accord Speedway for the Gobbler the temperature would get to 54 degrees at 2:30 in the afternoon. Finally Donna and Gary Palmer and Brett Deyo got a break from Mother Nature and over 175 competitors came to race. Fans also took advantage of the good weather and filled the pits and grandstands. It was a promoter’s dream. What a way to bring the 2017 season to a close. The Palmers are always looking for ways to make improvements in their facility. The most recent is enclosing the area in front of the concession stands. Their continued effort to improve the track is welcomed by the fans that come each week.

We walked through the pits and talked with many of the competitors about the past season and what was coming in 2018. One of the first we spoke with was, Cody Bleau who was at the Gobbler as a spectator. Cody was recently awarded the DIRTcar Rookie of the Year honors in the Modified division. As for 2018, Cody is still looking to come up with a ride that will not break him personally. We are certain that a ride exists for Cody for next year.

Next we stopped by the pit area of Mark Pullen standing next to his Modified No. 30. Pullen is a veteran at the racing game, he started racing in 1979. He said he had looked at retiring before the season started, he had so much engine problems in 2016 he was getting discouraged. He decided to come back in 2017 in hopes his luck would change. Mark is one of the drivers who is still having fun and that is always good to hear. Mark is currently driving a car that formerly belonged to J. R. Heffner. In the Allison Ricci pit we noticed a young man busy scraping clay off the front of the car and found out it was Mike Ricci’s grandson, Blake. Allison already has a bunch of family support on her side, father, uncle, grandfather and now another member of the Ricci family has joined the crew. The Ricci family has a talent that our sport has enjoyed for decades and it looks as though that will be carried on by the new generation.


A few weeks ago rumors were flying around Middletown that Andy Bachetti might be returning to a track he once called his Saturday night home, Orange County Fair Speedway. Andy said there is no answer to this at this time but he thinks he would do well at Orange County. We know when he visits Orange County he does well and we wish him the best whatever he chooses.

A group that is visible at many tracks and special events is the North East Stock Car Old Timers (NESCOT) and at the Gobbler they made their presents known once again. Selling calendars for the club were Dave Crain and Paul Faulkner who also gave $75.00 from NESCOT to the track to present to the driver that traveled the farthest for the event. If you were at Saturday’s event and looked for Rich Carpinello who is usually manning the table, he was at Lost Speedways at the Saratoga Auto Museum. On one of our walks through the pits we found ourselves with the wingless sprint group where we spoke with a young lady standing near the No. 3H. Heidi Hedin said she has been racing since 2008 starting in the quarter midgets before moving up to wingless sprints. Heidi said her best career finishes include three wins. She competes at Accord and New Egypt weekly. At Accord this season she has eight top fives and 12 top tens and finished fifth in points. At New Egypt she had two top fives and eight top tens. Heidi introduces us to her dad, Sven, who is her main stay on her crew. She said she enjoys racing and especially being able to work with her dad. It’s always great to see families working together.

As we close this effort we send our thoughts and prayers for a speedy recovery to Alton Palmer who will go into Albany Medical Center this week for surgery.