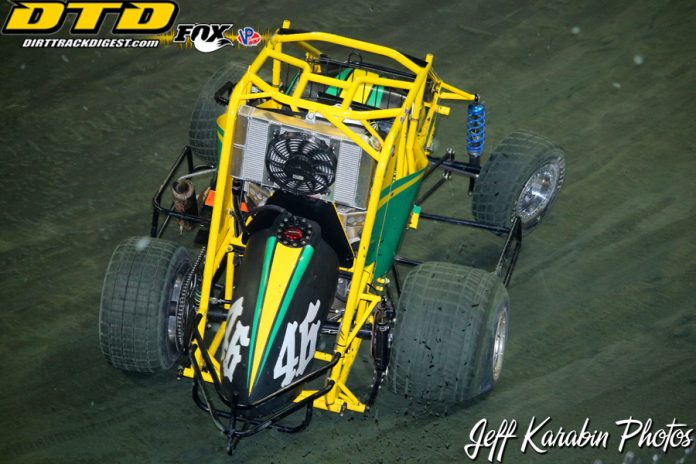 Whitey Kidd III got it done the hard way on Saturday night in the first ever East Coast Dirt Nationals in Trenton. Kidd transferred through the B-Main, started 13th before working his way by Alex Bright on a late race restart to take home the win in the inaugural event.

“It means a lot,” commented the 36-year-old about the win. “I’ve been going to AC since the beginning and trying to win there. I made a lot of A-Mains, ran in the top ten there and had some top fives, but never got a win there. I’ve been waiting for them to do a dirt race. I run dirt all the time so to win the first one is pretty cool.”

The turning point of the 40-lap feature for Kidd was a mid-race restart that saw a pile-up on the frontstretch. He somehow made it through the crash. From there he worked the outside of the speedway to put himself in position for the $5,000 winner’s check.

“There was one pile-up where they all jammed up in front of me,” stated Kidd. “I don’t know how I got out of it. I just dumped the clutch and steered and jumped in the gas and I was able to pull away from all the cars piling around me. That was the big break of the race, otherwise I would have went to the back. Being able to clear that I was able to get to seventh at that time and work my way through.”


He worked his way through the field on the bottom early before working the outside of the speedway as the track changed with the laps clicking off. He then made some moves on the bottom to get to second before the high-line propelled him to the lead.

“I made a lot of passes hugging the bottom,” said Kidd. “When I got up to fourth I slung it in on the outside and I got Tim Buckwalter there and I kept working it. I picked off that 97g  (Gary Bozowski) car, then was starting second I was on top of Alex Bright. He kept getting me but I just timed that last restart perfect and I was able to stay side-by-side with him down into one and I had the top. The top was where you needed to be.”

The restart that afforded Kidd a shot at the lead was a caused by a spin at Eddie Strada. Kidd was with Bright for a few restarts late which allowed him to notice the consistency with the restarts. That helped him to get his timing down to make the race winning pass.

“His starting spot was basically the same point,” mentioned Kidd. “He was chugging it down hard and I just timed it right on that last start. We went by the start finish line side-by-side. I drove it into one and it stuck. I was leading by the backstretch. That is pretty much it. He gave me room and I shot it in on the outside, the rest is history.”

History it is, and Kidd goes down in it as the first ever winner of the East Coast Dirt Nationals in Trenton.