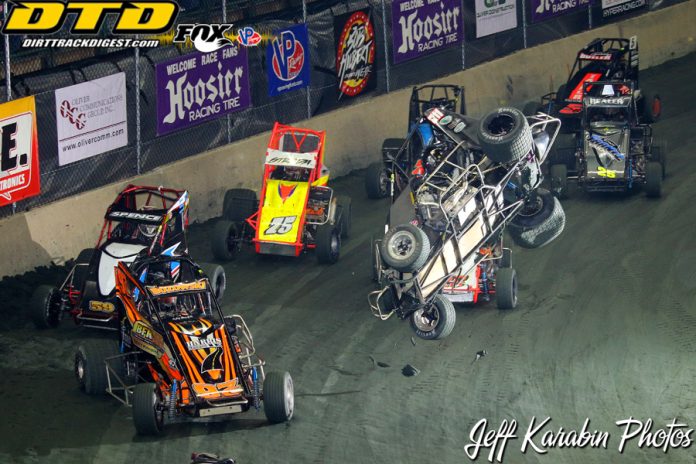 It’s rare that you see Alex Bright give up the lead late in a main-event but that’s exactly what happened on Saturday night in the inaugural East Coast Dirt Nationals for the 600 Micro Sprints in Trenton, N.J. A caution with two laps remaining set up a restart that allowed Whitey Kidd III to steal the lead and the win away from Bright at the CURE Insurance Arena.

“On the starts, until I got up to speed, I was a little tight,” stated the 26-year-old Bright. “I had to wait until I got my car straight then I’d go. That gave him (Kidd) the opportunity to guess when I was going to go. On that last restart he timed it perfectly and got around me. I should have mixed it up, but I was trying to get a good start myself and not mess with him. He out snookered me on one of them, but it was the most important one.”

Carber From 22nd to Third

Brian Carber worked on his No. 41 Micro Sprint all weekend long before finding the hot setup for the feature on Saturday night. The Pipersville, Pa., driver made some changes after the B-Main which paid dividends in the 40-lap feature.


“We were pretty good in the B-Main, but yesterday we really struggled after we were phenomenal in practice,” commented Carber. “Today we knew if we didn’t try anything and if we got in the A-Main we were going to really struggle. We maintained through the B-Main, found out a bit more, then in the A-Main we kind of felt our way through. We were patient until halfway. I knew halfway that it would come to us. We just needed the right opportunity.”

Luke Thomas raced his way from the D-Main, yes the D-Main to finish seventh in the feature on Saturday night. Thomas had a great qualifying heat race before a flat tire derailed his night. He made an amazing recovery to make the 40-lap A-Main.

“Yesterday after the heat race I thought we were in a good spot, we were third high point man,” stated Thomas. “We went out for our feature and ended up getting a right rear flat. Normally you go through the alphabet soup it’s a task and most of the time you don’t make it. Everything went out way. We had some luck. We had some good hard racing. My crew guys had my car on a rail. It ended up working out for us.”

Mike Iles took the wildest ride of the night. Iles No. 711 dug in on a restart in turn one causing him to flip wildly through the air. He landed upside down. Luckily he wasn’t injured…

Tim Buckwalter pitted for mechanical issues on lap 11 of the feature. Buckwalter returned to post a fourth place finish…

Modified regulars Billy Pauch Jr., and Mike Maresca had their days end early after being involved in crashes. Pauch was scored 19th while Maresca ended up 21st…