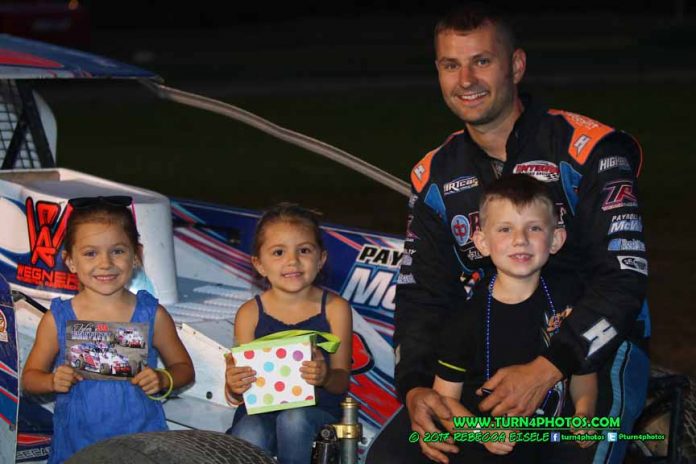 Can-Am Speedway, as it will now be called, has been through a lot the last few years with the fluctuating ownership. The most recent owner, the Caprara family, retook the reigns last season after a run by Tiger Chapman at the helm. The 2018 season will see yet another new owner, one with local roots to the area with eyes on bringing the track back to prominence in the Northeast racing scene.

Tyler Bartlett reached agreement this week to finalize the purchase of the LaFargeville, N.Y., facility. The North Country native worked out the details to take over after it looked like the Caprara family wasn’t going to open the track this coming season. The track has been a mainstay in Bartlett’s life and he didn’t want to see go by the wayside.

“We got to keep it going,” stated Bartlett to DirtTrackDigest.com when reached by telephone. “It was going to shut down. It’s been for sale for a long time and Caprara’s were not opening the doors next year. It’s been a part of our lives and our history since I was five-years-old. I’ve been going to that race track forever. I probably shed my first tooth there. We grew up there. It’s just a part of the family.”

Although Bartlett has no prior experience running a speedway, he and his family have a wealth of knowledge which he thinks will help them make the facility successful. He’s excited for the chance to bring Can-Am back.


“I think we are ripe for success,” mentioned Bartlett. “We have a lot of experiences that can help. My parents with catering and vending and our racing history. We have the complete package. My dad’s racing knowledge, the food, everything. We are bringing a lot to the table from multiple angles. We are going to bring back the familiarity and go back to basics.”

Some changes are expected with the biggest being the move back to Friday night racing action with the addition of sanctioning from DIRTcar for the facility, including for headlining 358-Modified division. That was something Bartlett felt was important enough to switch his night of competition for.

“It was the only option that we had to get DIRTcar sanctioning,” he said of the Friday night move. “I think that’s important with where we are and where the Modifieds have come to. The decision at Fulton (Speedway) and Utica (Utica-Rome Speedway), going to Friday’s we are going to have the support and networking from that angle.  It gets Brockville (Brockville Ontario Speedway) off your back and you get their support. We needed DIRTcar sanctioning for multiple reasons. For stability, for the strength of the networking and the back bone for tech.”

Tech is something that is a high priority for Bartlett and the new leadership at the track. He felt like things could have been better over the last few seasons and he’s focused on bringing in a strong team in 2018.

“We are going to bring tech in and it’s going to be fair and just,” stated Bartlett. “We got some phone calls out to some reputable tech people that we are looking to bring in. We’ll know more shortly.”

Bartlett plans to continue to compete in the Modified division on a weekly basis, but he’ll leave the decision making up to new general manager Bobby Thurston while Matt Burdick returns to the flag-stand for the upcoming season.

“I’m going to be an active owner, but I still want to be able to compete and not butt heads with everyone,” commented Bartlett. “We are trying to bring the best in the business to the table. Obviously they know what they are doing. With all three of us, with our experience, we are looking to thrive not just survive.”

Once grumblings of a possible deal made their way through the rumor mill, Bartlett started receiving support from around the racing community as people are excited about the 2018 season at Can-Am. He’s heard from numerous people looking to help his efforts.

“We’ve been getting an out pouring of support,” cited Bartlett. “People have been chit chatting about it and I can’t even explain how my phone is blowing up with excitement. From competitors to people that I don’t talk to very often. There is a lot of people that I didn’t know where going to support us and they are. That to me is a sign for some success right out of the gate.”

With the change to Friday nights, the schedule will still look similar to what it has the last few seasons with the return of the 358-Modified DIRTcar Series, the Lucas Oil Empire Super Sprints as well as a four race mini-series with Brockville Ontario Speedway sponsored by 1000 Islands RV. A two day show, “Border Battle,” in September will wrap up the racing season. He’s still finalizing all the details and stated that schedule will be complete in the coming weeks.