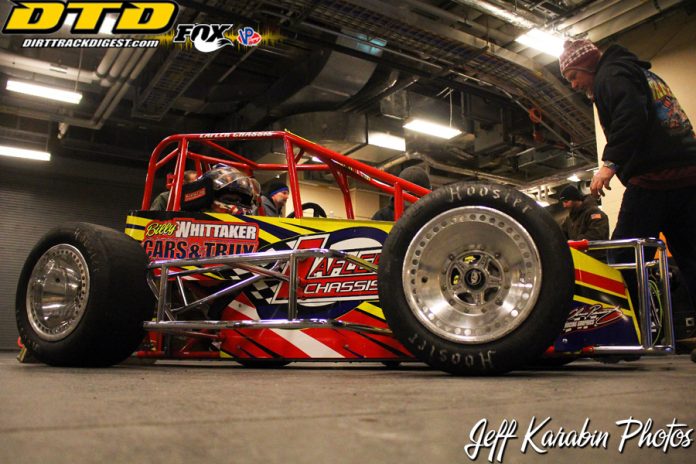 Billy Whittaker got behind the wheel of a powerful TQ Midget on Friday night at the PPL Center in Allentown, Pa., for the first time. The big-block Modified driver wasn’t sure what to expect for his maiden voyage. All he wanted to do was make the show. He did that and a little better scoring a solid 10th place effort in the 40-lap feature after starting 17th.

“My goal was to get in the show and we did that,” said a smiling Whittaker after the race. “I was surprised when there was 54 cars here. I got up to seventh at one point and I definitely would have liked seventh, but I’ll take 10th. I never imagined that I would be able to do that. All these kids, they have experience and good stuff. It’s tough sledding, but it was fun.”

Whittaker, running as a teammate to Mike Maresca on the weekend, had to adapt quickly to the indoor style. It is far different than the wide open dirt tracks of Central New York where he’s spent the last couple of seasons competing. Indoor racing is full contact sport where things happen quickly inside the race car.

“These cars are pretty snappy, pretty cool,” he said. “It’s tight confines. You have to be really up on the wheel. I have to thank Mike Maresca for putting this deal together for us and giving us a shot. Honestly it’s pretty cool. It’s tough. It is close contact, push them, smash them and all that kind of stuff rolled into one.”


As mentioned, Whittaker got to as high as seventh in the feature before a late race restart saw him catch a wheel and bounce allowing several cars to get by him which caused him to fall back to the 10th spot. It’s all part of the indoor racing.

“Once I got into a rhythm I got up to seventh and I was good there,” commented Whittaker. “At that time I was a seventh place car. Then I screwed up a couple restarts and drove over wheels. It was fun. It’s tough. Don’t let anybody fool you and tell you these are cute little cars. You got to man handle them. They are fast and there isn’t a lot of room.”

Whittaker will be back in action on Saturday night looking to improve on his 10th place finish in the 40-lap finale.