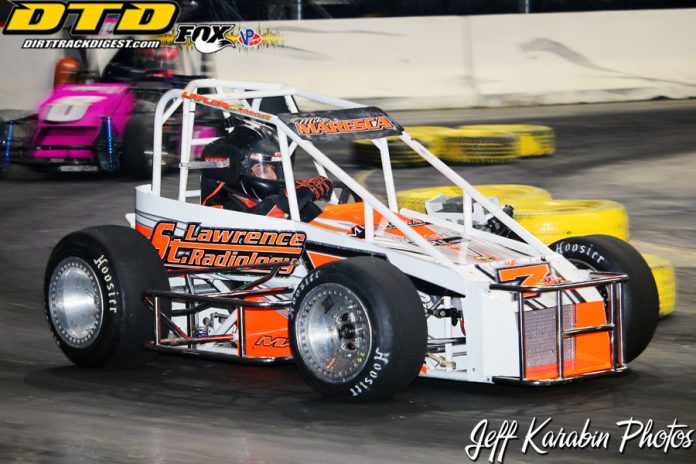 Mike Maresca has been earning plenty of frequent flyer miles this off-season racing wherever he can, whenever he can.  The Pottsdam, N.Y., driver competed with the 600 Micro Sprint in the East Coast Dirt Nationals in Trenton, N.J., in early December before heading to the Tulsa Shootout in Oklahoma just over a week ago. This past weekend he got his first taste of TQ Midget action as he competed in the Allentown Indoor race.  He left there Sunday to race in the Wild West Shootout in Arizona with the Super Late Model.

It’s been busy, but Maresca is enjoying the opportunity to continue his racing indoors.

“It’s inside, not outside so that’s good,” he joked on Saturday night from Allentown. “It’s warm and it’s fun to do.”

His maiden voyage in the TQ wasn’t what he would have liked as he failed to make the show on both Friday and Saturday nights. He’s competing against some of the best when it comes to indoor racing while attempting to learn the ropes of the tiny cars with lots of horsepower.


“This is the second race with this car,” commented Maresca. “We came here pretty unprepared after coming back from Tulsa. We had a lot of issues. We didn’t get a lot of practice yesterday. We qualified early. Things really haven’t been going our way this weekend. We got a good crew, we’ve fought hard and we got the car fast now so that’s good. I feel like I have a pretty balanced race car. Last night I missed it by one or two. We were close. We fought back hard.”

As he said, Maresca is behind a bit after heading out west to compete with the 600 Micro. The team didn’t have time to prepare the TQ fully before hitting the concrete for the first time.

“We came here to have a good time, but we came here unprepared,” he said. “I put my team and myself behind the Eight Ball by going to Tulsa and all that, but we are living the dream.”

Although the Micro racing put him behind, Maresca believes it’s a positive learning experience. He hopes he can use the knowledge gained racing those cars to improve his Modified program in 2018.

“That was a ton of fun,” commented Maresca about Micro Sprint racing. “A lot like the Modified. It has a solid front axle and all that. It’s a lot of fun doing that. I think that keeps me sharp. I’ve learned a lot racing those cars and hopefully we can translate that to the Modified.”

Maresca admitted there is a bit of a learning curve when it comes to racing on the concrete indoors with the TQ Midget. He’s got some experience on pavement in his career, but nothing can prepare you for racing a TQ Midget where you turn seven second laps in full contact style racing.

“This is a big difference,” mentioned Maresca. “Billy (Whittaker) and I could race each other for 20 laps to work out a pass in the Modifieds because you have a lot of respect and you have time. Here there is no time. It’s definitely elbows up racing, hard racing. It’s not like super dirty with people dumping each other, but there is contact and that’s part of it.”

Maresca brought Whittaker to the team and he watched his teammate make the show on both nights. They continue to learn together as they go as Whittaker had no TQ experience prior to Friday. Every time one of them comes off the track they share what they learned.

“Having limiting laps, same with Billy, we are figuring it out as we go,” stated Maresca. “We come in and share what we are doing. It’s cool having him around here too. I was really glad to see him make the race.”

Although he didn’t make it in, his learning will continue as he’ll have another chance to figure it out in three weeks when the series returns to action in Atlantic City, N.J., for the Gambler’s Classic on January 26, 27.  For this week though he’ll continue to focus on the Super Late Model in Arizona.