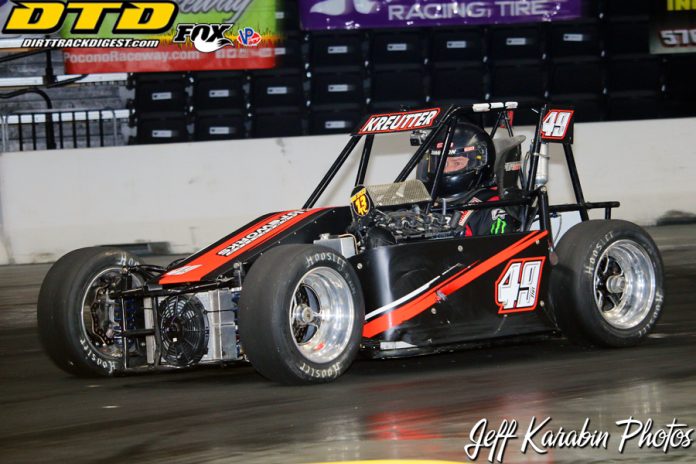 Scott Kreutter knew he had a fast piece coming into Saturday night’s racing program at the PPL Center in Allentown, Pa. He also had some extra motivation behind a strong performance. The Western New York driver was piloting a custom built car put together by Trey Hoddick and Karl Hehr. The car was previously piloted by the late Ted Christopher.

With all of that in the back of his mind, Kreutter ran a great race, had some luck and eventually parked his No. 49 in Victory Lane for his first ever Indoor Racing Series Fueled by VP feature win.

“This is awesome,” commented Kreutter. “Going into this weekend I had really big shoes to fill with Teddy (Christopher) being the last person to drive this car. This is in honor of him. This is awesome. The car is a great car to drive. I have to thank Trey Hoddick and Karl Hehr, Nick, Matt, Peter and everyone that helps make this possible. Without them guys I couldn’t do it.” The win for Kreutter ranked right up there with his Patriot Sprint Tour series title. Only a handful of drivers have been able to win indoors on the concrete so he’s added his name to that select group.


“This is right up there with the championship,” cited Kreutter. “It’s so hard. Not only do you have to have a fast race car but you have to have luck. This is such a tough deal. You got the best drivers from a lot of different disciplines. I kind of feel like we are at a disadvantage. These guys run on pavement and asphalt every weekend. Most of them are Modified guys. So to come in here, as a dirt driver, and make it happen is awesome.”

The Western New York driver started the race from the inside of the second row. He made quick work of the two drivers in front of him to take the lead before exiting turn four on the first lap. It was a daring move that paid off with the lead.

“In the dash I sat back because I did not want to start on the outside pole,” said Kreutter of the pass. “It worked out great we got the finish and started third. I knew we had a really good race car. I saw the spot and I knew we had to take it. Last night I kept getting stuck on the outside and I think we had the car to win last night, we just got held up a little bit. We ended up tangling with two to go and going to the back. I had to try. I didn’t come here to finish fourth. It’s all good. It all worked out.”

As is usually the case with indoor racing, Kreutter had to survive multiple restarts. On nearly each of the restarts he had to fight off Erick Rudolph. Rudolph tried to hang with him on the outside but couldn’t make it work.

“Once we got to the lead, on the restarts, I knew it was just drive it in as hard as I could so I didn’t get punted from behind,” commented Kreutter. “I would catch the middle of the corner, let the car rotate and turn. It worked out great. I was worried there was so many cautions.”

Kreutter gave up the lead on lap 27 to defending indoor series champion Ryan Flores. Seven laps later Flores night when up in a ball of flames as his engine exploded. That gave the lead back to Kreutter.

“I knew he had a good race car so I didn’t want to push the car too hard,” said Kreutter. “I was trying to make sure to hit my marks and do my thing. All of a sudden I went in and the car didn’t catch rubber and he (Flores) was gone. He passed me. They always seem to run good right before they blow up. After he passed it seemed like it started to go away because I caught back up to him. I saw him start to smoke. I gave myself a little space behind him. It started smoking pretty good and I didn’t want to get caught behind him in the oil when it went.”

The massive amount of fluid that was put down on the track as a result of the crash resulted in a lot of drying agent being placed on the speedway. This took some of the grip off the track for the final few laps. Kreutter was fine with it as he had plenty of experience sliding sideways as a dirt racer.

“I’m a dirt racer,” he said. “That was the best thing that could happen. They can put speedy dry down all night long. I don’t care. I knew what to do and it was fine. Our car handles really good when the track rubbers up. When it gets loose, I know what to do running dirt every weekend. It’s all good.”

Kreutter now looks ahead to the next series race at Boardwalk Hall in Atlantic City. The Gambler’s Classic is the one race everyone wants to win. Considering how strong he was, Kreutter has to be considered one of the favorites to be in contention for a victory. He knows he has the equipment, but he also has to have a little good fortune on his side.

“The car is good and I have to do my job and keep my cool,” he said when asked about Atlantic City expectations. “You got to have luck, especially in Atlantic City. Hopefully we can put everything together and make it happen there. Things can change. You can be leading and next thing you know you get dumped and you know you are 20th again. There is a lot of stuff that can happen. Indoor racing can change in a blink of an eye. You are turning seven or eight second laps. It happens really fast. You don’t have much time for anything.”

Kreutter’s quest for an Atlantic City win starts on January 26.