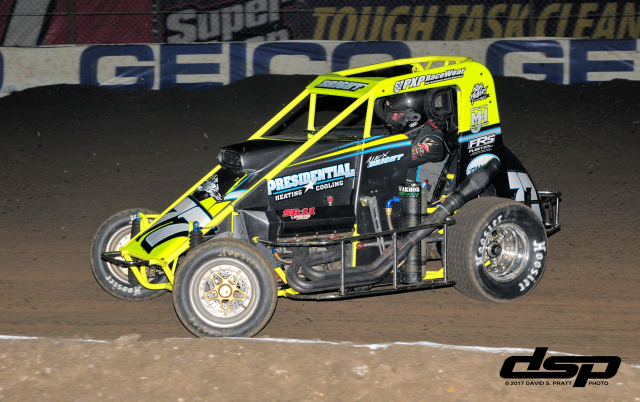 TULSA, OK – As the checkered flag dropped after the 25 lap A-Main for Night #1 at the 32nd Annual Chili Bowl Nationals, Elk Grove, California’s Kyle Larson won his third preliminary night which tied him with his good friend Bryan Clauson. For Larson, it locked him in Saturday’s 55 lap A-Main along with second place finisher Brad Sweet and Tyler Courtney who took third on Tuesday night.

Alex Bright hails from Pennsylvania, he’s a past ARDC champion and also a preliminary night winner in 2016. The goal for Bright is plain and simple, it’s to take home the Driller. A third place finish in his qualifying event put him mid-pack for the start of the A-Main.

Bright’s new Elite chassied midget turned into a hand full. The young driver tried high, low and in both corners the dirt oval inside the Expo.


“We just weren’t quite on tonight, I think the driver was a little off, the car was a little off,” Bright continued, “We made so many changes I’m actually not quite sure where we are at but we have to get better on Saturday.”

The #77 would pass a few cars in lap and then give them back the next.

“I think we know what to do to get better for Saturday and we will need it coming from the C-Main (his 11th place finish will put him on the pole for the C),” he went on. “Billy’s (Pauch Jr.) car should be identical to mine but maybe the new car just doesn’t react the same. We will try learn from him too.

“His engine is a little different that mine but I don’t think that will make much of a difference,” Alex noted.  “We have a good team, we will get it and hopefully we can put this car in the A-Main on Saturday and then anything can happen.”

Poughkeepsie, N.Y., driver Chris Dyson is best know for his road racing accolades in series such as the Pirelli World Challenge and American LeMans Series, where he is two-time champion, but in 2018 it marks his fourth try at the Chili Bowl Nationals. Running a Beast chassis wrenched by Sean Michael as a part of the two car Michael Heffner team, Dyson was fast out of the box taking second in his heat. During the qualifier he tried several grooves.  That saw him lose a few spots which relegated him into the B-Main.

“We had a real good car in the heat but I just didn’t find the right line I think in the qualifier race,” Dyson noted. “We went to work and Sean I think gave me a good car for the B-Main but we got turned round early and got a flat tire.”

For the driver that also straps himself into a Cory Kruseman prepared mount while he is on the west coast, it was an uphill climb for the rest of the B-Main.

“I was finding a good line and catching the cars ahead of me.  I just think that little problem at the start just hurt us too much.”

Dyson actually will fly back to New York where he will be coaching his son in a fourth grade basketball game before heading back on Friday.

“I know Sean will get the car right, we will be coming from something from the E-Main but hey, you need to learn from every lap,” Dyson went on with his midget experience.  “These guys are just the absolute best and to run with them actually means a lot. I am taking so much from what I learn here on the dirt and it’s actually helped me when I go back to the road racing.

“We will give it our best shot on Saturday.”

Canada native Holly Porter was once again aboard a Glenn Styres owned Boss Chassis midget. It was a car that was piloted by Ohsweken Speedway 360 champion Dylan Westbrook last year. Porter is making just her third Chili Bowl start but for the young female up and comer, it’s learning at each lap. “My car just seemed too loose during the heat and that put us behind,” she said. “But for the D-Main I really felt a lot better and could run the top real well.”

Her second place finish in the D-Main advanced her into the back of the C-Main where after 12 laps she actually passed half the field to finish in eighth.

“The car was even better in the C and I could run high or low and pass cars,” Porter noted.  “I think we have the car good now and we will see what happens on Saturday.”

When asked what she would do with her long lay off until Saturday, “I will be up in the stands watching and learning.”

Night #1 Notes – 86 of the scheduled 88 cars answered the call…The flip count ended after the first night at 11…Zach Daum was the hard luck driver of the night in the A-Main, while running in second behind Larson he tried to avoid a flipped car and his car slowed to a stop…The annual Race of Champions that paid $6,063.63 went to Chad Boat…Some surprising DNQ’s were Chad Boespflug, Stevie Sussex, Jonathan Beason, Tony Bruce Jr., Travis Rilat and Derek Hagar among the many.