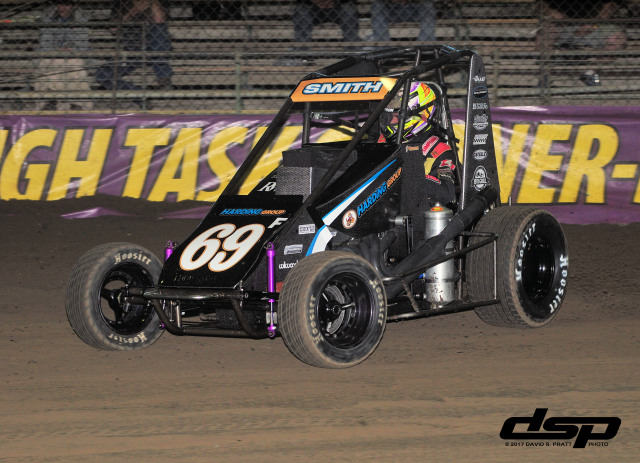 TULSA, OK – For Pennsylvania’s Ryan Smith and Vermont’s Adam Pierson they went into Qualifying Night #2, Wednesday night at the Chili Bowl Nationals with high hopes and for good reason.

Smith is a young standout of many forms of racing. Starting in Micro Sprints, moving to Midgets, full blown Sprint Cars and placing second in points with the All-Stars just this past season. He breathes open wheel racing and comes to the Tulsa Expo Center with credentials that make him a candidate to start the A-Main on Saturday.

For Pierson, while his name might not be known outside of his New England homeland, he has a resume’ that shows he belongs in the Chili Bowl field and is a contender himself. He also steers a diverse type of open when cars himself which includes being one of the best in dirt Sportsman.

Wednesday night was building blocks to set both of them up for a stout run on Saturday hoping to find their respective Midgets in the A-Main which means a shot at the Driller.


Ironically they found themselves in the same heat, heat 10. With finishing positions and passing points key, Pierson’s second and Smith’s third place finishes locked them in easily to their respective qualifier events which help set the A and B Main lineups.

Smith got his shot early right in the first qualifier and using the bottom lane, he passed just enough cars to gather the 14th most points which took the last spot in the A-Main. Mission accomplished.

“I had a good car, probably good enough to even try to get a spot or two but sometimes you have to be on the defensive,” noted the driver from Kunkletown, Pa. “If you hit a wrong line or give up just even one spot it can hurt you. I thought I was in a good spot finishing third and it was just enough.”

With points earned and the top six inverted for the Qualifiers, Pierson found himself on the outside pole of qualifier #4 alongside J.J. Yeley. Yeley got the jump with Adam holding his own until a few laps in all of a sudden his #74 snapped around in turns three and four.

There was little or no damage and he quickly restarted in the tail. Not giving up and getting his focus back, Pierson fought back to gather a sixth place finish which gave him a good starting spot for one of the B-Mains.

“I just didn’t expect the track to be as slick as it was, it was totally my fault,” Pierson went on. “I just gathered myself and started to pick off cars. I have a real good car under me so I needed to get back what I lost.”

With the second B-Main coming to the track, four cars scheduled to transfer Pierson again found himself on the front row. Unfortunately for the likeable driver, it was déjà vu. When the green flag dropped he went into turns one and two and again his Spike chassied mount snapped around. Shortly after he was sitting dejectedly in his trailer, part saddened and part disbelief.

“I am just not sure what made me do it not once but twice. I take full blame, it was my fault, totally my fault,” he said on dissecting the night.  “I was wasn’t over excited or nervous at all. I actually felt very loose today and then it just happened. I let myself down, friends and car owner, I run well here, have qualified for the A-Main on a preliminary night before but for some reason it wasn’t going to happen today.”

For Pierson he will be up on the wheel and ready for Saturday. He will tackle what is so widely known as “Alphabet Soup” and you can almost lay even odds he will find success…he will, he’s just too good not to.

While Pierson was gathering his thoughts, Smith he was getting Beast built Sprint readied for the 25 lap A-Main and hopes to set himself up nicely for Saturday. When the green was waved for this event he was making his noise and quickly.

There was no defense here, you just can’t in the A-Mains here. He took to the cushion, started to pass cars and did so with rather ease. While the upfront battle between Abreu and two Thomas’ was thrilling the packed house, Smith was thrilling his Pa. natives and his crew.

Sneaking in on the likes of Chris Windom and Sammy Swindell all of a sudden his mount just slipped over the cushion in turns three and four snap rolling violently. First it was to see if Smith was okay (which he was), then to ask what happened and then to survey damage and make repairs.

“I just got in too hot, it was that simple. Just a case of driver error. I had such a good run and you have to get as many cars as you can so I was trying the hardest I could,” Smith went on.  “It’s tough…You have to do so well in all the races your in to set yourself up for Saturday. I was looking and a nice starting spot on the B and now we will try from the D….Chili Bowl, what else can you say.

“I have a good team, the car doesn’t look to bad. I’ll probably be sore tomorrow but we will be ready,” he went on about Saturday.  “They give you enough laps to make your moves in the mains on Saturday. Let’s just see if we can move through them and get in the A.”

For both drivers they were quietly in their pit stalls once the night’s activities ended. Thoughts going through their head as you can imagine, but Ryan Smith and Adam Pierson have talent and lots of it. Their local fans will be in for a treat on Saturday watching them.

NIGHT #2 Notes – Rico Abreu won his third qualifying night in his Chili Bowl career but this had more meaning after a 15 week layoff from racing due to a concussion…Tyler Thomas won over many, many fans with his all out and clean style to take second ahead of wingless driver of the year Kevin Thomas Jr….Another heart break on the night was by Brady Bacon when coming down for the checkered in his qualifier easily ahead of Abreu he too shot into the turn 4 wall with a wild flip. The crew did get his car ready with Bacon just getting the last qualifying spot on his B-Main. Coming up through the field he got caught up in the Smith incident, again restarted and finished, well a guess a perfect ending on his night, 13th … Alex Sewell did a wild flip in his C-Main which caused for a delay to fix the fence. He miraculously restarted the event only to flip three laps later ending his night…Jason McDougal took home three drillers last week during the Tulsa Shootout passed more cars than anyone could count. Started last in his heat, back of the C-Main, back of his B-Main, made the A-Main where he finished in seventh!…Casey Shuman, Harli White, Travis Berryhill, Daniel Robinson, Colten Cottle and A.J. Fike notable DNQ’s