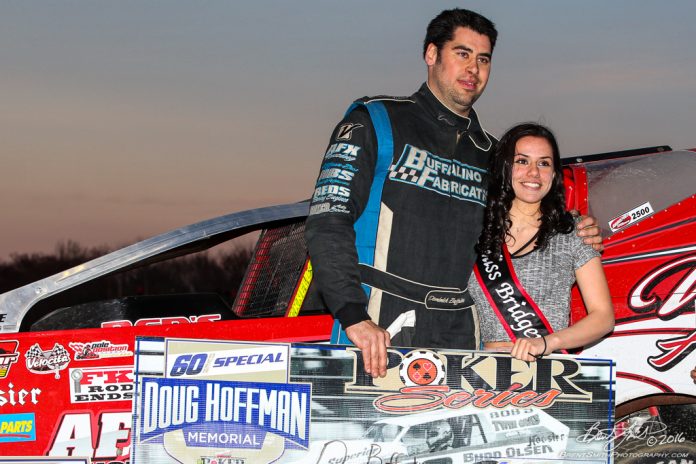 Amidst an off-season that has not produced much news as far as driver changes go we finally have something to write about here on the local Modified scene.

36-year-old Dominick Buffalino has been a staple here in the PA/NJ/DEL Modified scene driving the #51M for Pat Michaels the past six seasons and most of us thought that driver/owner combination would stay the same the in 2018 considering the past success they have had. However, it was announced last week that Wade Hendrickson would now be the pilot of the Michaels Brothers car in 2018 leaving fans to wonder what happened to cause the split and wondering where this would leave Buffalino for the upcoming race season.

While the naming of Hendrickson to the #51M caught me by surprise, the split between Buffalino and Michaels did not. At the end of last season, I could tell there might possibly be a change coming for 2018 but was still optimistic that this pairing would remain together.


“Listen, Pat (Michaels) and I have had a lot of success in the past six years and probably would’ve continued to have success next year. However, I wasn’t having fun racing anymore and if I am not having fun doing this I don’t want to do it. So, I thought it would be in my best interests to walk away from the #51M deal and look for something that I could have a little more fun doing. Racing is the most important thing to me and for me not to enjoy doing it is a big problem. I even talked to my girlfriend about quitting and not running anymore that’s how miserable I was.”

The Michaels/Buffalino combo has had quite a bit of success over the years finishing third in points one year at New Egypt Speedway and finishing second in points at Bridgeport last season and grabbing a few wins along the way with some of those wins being in the higher paying races, but even with that success the New Jersey driver was not having a good time.

“It just came to the point that when you leave the track after winning a big race and you feel like you just finished last that there is a big problem somewhere along the line and that’s how it was last year, and I just couldn’t continue on like that, especially when you are doing most of the work on the cars for nothing. I did all the bodies and bumpers on them and never took a dime for all the work I did, but it didn’t matter to me because I just wanted to race and I wanted to win. I mean, that’s all I have ever wanted to do was to race and Pat gave the opportunity to do that. I put up with not having fun, in part because of the wins, but after a while that didn’t even matter anymore.”

Although Buffalino is moving on to a new opportunity, he was very adamant in saying that he and Michaels parted on good terms and that there is even a chance they could do something in the future together for Super DIRT Week in Oswego and for Eastern States Weekend at Orange County Fair Speedway as Hendrickson has no desire to do either. Buffalino was also very appreciative of the opportunity that Michaels had given him over the year.

“I want to make sure it is known that I am very grateful for the opportunity Pat has given me over the last six years. Pat took a driver who hadn’t traveled and raced at many different tracks in his early career and took me to many tracks I’ve never raced at like Grandview and Big Diamond to just name a few. The best part was when he took me to Syracuse to race at the Mile. Most people won’t say this but that was my favorite track ever to race on and if it wasn’t for Pat I would’ve never had a chance to race there and I will be forever grateful to him for allowing me to race at Super DIRT Week. With Pat allowing me to race at so many different tracks it turned me into a race car driver that people know when I come out on the track and not just a local driver who races at a single speedway. Probably one of the coolest things that happened to me was when Tim Fuller came up to me to talk racing.  That meant so much to me at the time and made me think that, ‘hey, now I am a driver that is respected among his peers.’ I can remember a few years ago at either SDW or ESW that every time the caution came out they would put five or six of the DIRTcar regular drivers ahead of me for the restart. It would really piss me off and then I would go and pass them again and sure enough on the next caution they would do the same thing. But at the time no one knew who I was but now that kind of stuff doesn’t happen to me because they know who I am and without Pat that never would’ve happened so even though we aren’t together anymore I owe a lot to Pat. Listen, I was contacted by one of the bigger teams in our area about driving their cars next year, it didn’t work out because their driver ended up staying but it felt good to get the phone call and without Pat giving me the chances he did that wouldn’t have ever happened.”

Walking away from a deal is always tough but sometimes you have to move on, so you can enjoy doing what you love to do the most and for Buffalino that is driving race cars. For the 2018 season Buffalino will be behind the wheel of the John Pakenham No. 18. Pakenham has driven himself and has also fielded cars in the past for Billy Pauch Jr., and for Rich Rutski. Rutski will continue to drive for Pakenham at New Egypt Speedway in his own separate deal in which Rustski will drive Pakenham’s TEO car and maintain the car himself separate from the deal Pakenham and Buffalino have in place.

Both Bicknell cars that Pakenham had, have or will be sold mostly due to the fact that they are both standard cage and standard seat cars that Buffalino just will not comfortably fit in. Pakenham has purchased a 2009 Bicknell chassis from PJ Oliver for the team’s small-block to run at New Egypt Speedway. Pakenham has also just ordered a brand-new Bicknell chassis for Buffalino that the team will drop a big-block in for them to do a little traveling. Buffalino knows it will be a little different this year but he is up to the challenge and is looking forward to having fun once again while doing what he loves to do the most.

“Our plan right now is to run New Egypt for points and to run all of the Bridgeport Poker Series races and some or all of the Deyo South Series. I am really excited, and I haven’t been excited about racing in a long time to be honest. With Pat, it was like a job and don’t get me wrong when I race I take it seriously, and honestly, racing is probably the only thing in my life I am serious about. But if you can’t have fun while doing it they why do it. Look when I raced on my own I took it seriously, but I had fun doing it. This year with John is going to be fun and that means more to me than anything. It will also be the first time in a long while that I will getting paid to drive but honestly having fun is the most important part.”

“John has a big shop and will house and maintain all of the cars himself and this is the way I want it. John does his own bodies, so I won’t have to that this year. I will help him out whenever he needs it of course. The only thing I really want to be involved with is the stuff that makes the car work or not work. I’ll let John scale it but I will be there the first couple of times so we can get together to set it up the way I like to. John knows how to scale a car but it’s’ important for him to know how I like a car compared to how he likes a car. I will do all the shocks on the car every week but that’s it and that’s the way I want it. It leaves me more time to work on my fabrication business and maybe start making some money with it instead of building bodies for nothing for the cars I am driving.”

Buffalino told me that he’s been hearing people saying that the equipment Pakenham has is not up to par with what he’s been driving and wondering why he left a team with perceived better equipment to drive for a lesser known owner. Buffalino steadfastly disagrees with those statements and thinks the team he is going to driver for in 2018 will be just fine.

“Everybody thinks I won’t do good now because John doesn’t have the greatest stuff, but I didn’t have any secret or trick stuff with Pat either. There is absolutely no reason that this year’s operation can’t go as good as last year’s operation. John has some really decent motors at his shop. He has two big blocks and a few spec small blocks, and I think we will be just fine especially at New Egypt.”

Although it will be different in 2018 for Buffalino, he is definitely up for the challenge. But the biggest thing Dom is looking forward to in the upcoming year is having fun once again driving a modified. It will be the first time in a long time that has happened and that folks means everything to Buffalino. You can have all the success you want but if you are not having fun doing while doing it, it just doesn’t mean the same.