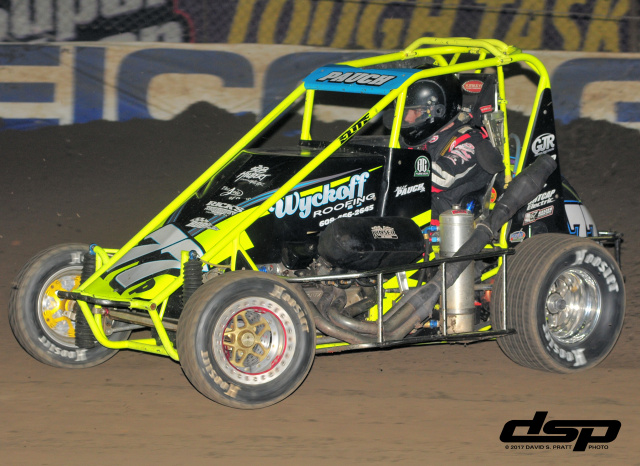 For a foursome drivers from the Northeast and Canada it was a mix bag of results. For Billy Pauch Jr., he was all smiles afterwards with a seventh place finish in the A-Main which locks him solidly in the B-Main on Saturday. Steve Buckwalter overcame engine woes early to finish 15th in the A-Main which puts him C-Main status for Saturday.

Canada 360 sprint car standout Dylan Westbrook made it to the B-Main where he will try to move through on Saturday to make his first A-Main. For Troy Betts, a bad draw and stacked heat caused him to struggle all night but he will be ready for Saturday.

“We had a good night, I think we had a fourth place car but the way the track was tonight it was tough to pass,” said the talented second generation Pauch.  “I was stuck on the bottom and would like to hit the top, especially late as the grove changed but you just didn’t want to take a chance to make a mistake.”


For the New Egypt Speedway champion he was greeted by all well wishers.

“Hey, we are in the B and we have a real good chance on Saturday. Our goal coming into this deal is to make the A-Main,” he went on.  “We learned some from Alex’s run on Tuesday and hopefully it will work out for both of us. I just can’t thank the guys enough and can’t wait til Saturday.” For Buckwalter his heat win looked to be flawless but shortly after the crew was thrashing on the motor.

“We had the lash cap spit out and it mushroomed the top of the valve. I didn’t think we were going to get it fixed but I found a dremel to round the top off and we put it back together,” noted the Chili Bowl veteran.  “Unfortunately the motor deal kind of got my mind out of focus. I had a good car but I just struggled some after.”

In the A-Main, his Elite built sprint was locked down on the bottom and just couldn’t make any moves forward. He also echoed the same words as Pauch.

“The track just wasn’t that good for passing, it was way low or way up top. You just couldn’t move around and with the cars in front of you, you couldn’t get aggressive,” the Pa. native went on about Saturday.  “I’m not sure where we are on Saturday or care, we are here to give it hell in each race and we won’t stop until they tell us too.” Dylan Westbrook was coming off a 12th place finish on his preliminary night in 2017. He had a brand new Boss chassis in hopes of making an improved finish. The Ohsweken Speedway and Southern Ontario Sprint champion was hoping to add to his resume.

Starting on the pole, Westbrook took second to Buckwalter which put him in the Qualifier. With passing points the norm the upfront start unfortunately put him in the back of the qualifier and also the B-Main.

“I think we need to work a little bit more on this new car, it’s good, just not quite as comfortable as last years,” said the young driver from Scotland, Ontario. “I made the A-Main on this night last year and had a good run so I am little bummed but the competition is so good out here.”

For Westbrook, while results are always important, he also likes to get his name out more.

“Everyone is here and if you do well you will get noticed,” he continued, “I want to move up in my Sprint Car career and if you can get someone to notice you out here it’s a bonus.” Newark, Delaware’s Troy Betts has been to the Chili Bowl before and there are also a few more cars with the family business Betts Garage flanked on the side. For Troy, he wants results as he’s an established and winning 360 Sprint Car driver but when you talk to him, the Chili Bowl is an experience.

“Oh, I just love it here! It’s the Chili Bowl,” Betts went on with enthusiasm, “We all set aside time to come here and give it a shot. I just need to step up my engine program. I have a good car but just lacking under the hood.

“I had one stacked heat. When I drew 86 normally you’re excited cause you can get a ton of passing points but I just couldn’t get any momentum to pass. I needed a yellow,” he added.  “I’m not sure where we will start on Saturday but if we move up four or five mains that will make for a good result.”

Qualifying Night #3 Notes – 87 made the grid on this night making the three night total 258…Tanner Thorson and Michael Pickens put on a show for the fans coming from the D-Main to the A-Main. Thorson came through to finish in 11th while Pickens was 14th…Caleb Armstrong easily was the most improved driver from practice day on Monday where he took the green and flipped in turn three on the first lap. His sharp midget showcasing San Francisco 49ers colors took fifth in the main event locking him solidly in the B for Sat….This night seemed to have the most talented field and DNQ names could make a great A-Main somewhere, Cory Kruseman, Michael Faccinto, Paul McMahan, Shane Stewart, Michelle Decker, Danny Smith and the list went on and on.