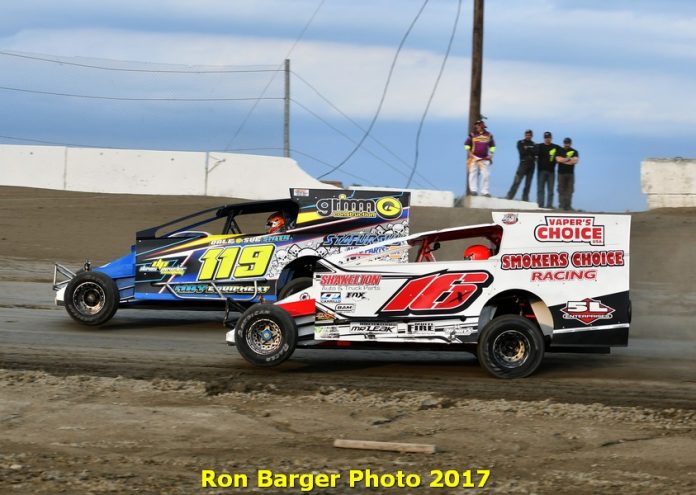 The road trip this time was a short one as it took Delores and I to the Binghamton, N.Y., Double Tree by Hilton Hotel and Convention Center for the 2017 Thunder Mountain Speedway awards banquet. With that it concluded the race season at the fast track located in Center Lisle, N.Y., and it was a gala affair attended by over two hundred sixty folks consisting of racers, owners, fans and staff.

Hardware and money was given out to the top ten in the Modified, Open and Crate Sportsman along with the Street Stock, IMCA, and the Xcel 600 Modified divisions. Top five in the Four-Cylinder and Rookie Sportsman also received cash and hardware on this night. After those awards and there was some specialty awards and then a brief thank you from track owner and promoter Karl Spoonhower. In all over $23,000.00 in cash and hardware was handed out to the attendees.

Here is the top ten award recipients in the highly competitive Modified division. Dan Creeden, who captured his second championship in a row with 654 points and five feature wins. That was a 47 point cushion over second place in points Nick Nye with 607 markers and the only other competitor to capture more than one win with two. Finishing just one point behind Nye was Jeremy Smith at 606 points and one feature win. Brent Wilcox finished fourth and a feature win and gathered 559 points and just three points behind him was Alan Barker with 556 and a feature win. Sixth was Colton Wilson with one win and 537 points Seventh through tenth was Cory Costa, 507 Brian Malcolm, 503 Barry White 503 and Byron Worthing with 420. Malcolm and White tied for eighth in points and Malcolm also had a feature win. All the points are from regular Saturday nights of racing.

In the Open Sportsman division it also found a repeat champion in Brian White 790 points and, like Creeden in the Modified division, led the way with five feature wins but only a nineteen point cushion over second place Chance Spoonhower at 771 and three feature tallies. Third place and fourth in points was close also as only two points separated third place Eddie White 695 with two wins and fourth in points Larry Mekic 693 and one feature win. Fifth place was Chris Jordan with a feature win and 666 points followed in sixth by older brother Kevin Jordan at 619 and two features. Seventh found rookie Landon Cummings with 562 points Seventh place with 545 points and a feature win was Billy Spoonhower. Ninth was Tommy Eiklor 532 and tenth was Dayton Coney with 442 points.


Crate Sportsman in 2017 was very competitive and saw some new competitors make there way to the mountain for tough racing competition. Here is how it all shook out after the season was concluded. Winning his very first championship at the speedway where he was the holder of only one feature win but consistently in the top five with twelve propelled Tommy Collins Jr. to that title with 747 points. Second to him with 724 points and four feature wins which led the way was Kenny Hammond. Third was Corey Cormier 714 and three features, fourth went to Mike Austin with 651 markers. Rounding out the top five was third generation driver Mike Nagel Jr. at 639 and one feature win. Sixth was Shane Spoonhower with a feature win and 619 points. Seventh and eighth place finishers Darren Smith and Pat Jordan both captured two features and tallied 564 and 559 points respectively. Ninth in points was Kailee DiMorier with 510 and rounding out the top ten with 456 points was Dustin Jordan.

Next up is the Street Stock division and here at Thunder Mountain it was a very highly competitive division where a full-field was a common thing. Compared to the other area tracks that ran the division last years those tracks struggled to get an average of ten. Championship for the 2017 season went to Lanson Albanese with a feature win and 743 points and eleven top fives again consistency paying off. Second in points with 705 was Earl Zimmer and again finishing races paid off as this driver did not have a feature win. Third went to Don Russell at 699 and two wins, fourth was Trevor Dudley 691 and a feature to his credit. Fifth in points with 686 was five time winner Damon Decker which led this very competitive division. Sixth through tenth was as follows, Mike Wibur 674, Jake Fowlston 583, Matt Spencer 575, Jonathan Carpenter 493 and Dan Force rounding out the top ten at 413.

The IMCA Modified division I only have the top ten with their points but no win totals, sorry about that. Here they are from one through ten. Will Ward 523, Gary Roberts, 493 Tyler Stoddard 482, Mike Stoddard 467, Dan Searles 446 rounded out the top five Sixth through tenth was Keith Lamphere 420, Brad Smith 398, Bumps Schutt 362 and tenth went to point champion Will Wards Dad Billy Ward at 269.

The last division with awards going to the top ten was the 600 Xcel Modified division. Will Eastman was once again the champion for his third in a row at 661 points and a feature win. Just three points behind at 658 and a feature win was Dana Davis who also found victory lane once. Chris Jordan finished the season in third with 611 points and two features wins, and fourth was Justin Shiner at 604 and a feature to his credit. Rounding out the top five was Doug Windhausen at 577 points. Sixth found youngster Bailey Boyd with 553 and just one point behind him at 552 and a feature win was another youngster Damon Henry for seventh. Eighth found Joe McCabe with 531 and ninth was the highest win total at five and 508 points was Byron Worthing. Worthing missed a few weeks or might have been right up there with the top point getters. Tenth was Tom Shiner at 496 markers.

Two division had awards for only the top five were the Four-Cylinder and the Rookie Sportsman divisions. Here is the Four-Cylinder division and a note here is that the front wheel drive and rear wheel drive cars run in a combination division. The championship was won by Chris Taylor with 669 points a ten point win over second in points Justin Ladue at 559. Again consistency came to play as Champion Taylor had no wins but eleven top fives and Ladue had four feature wins but obviously trouble in a few races. Third was Rich Wagner 478 and a feature win, followed in fourth by Mark Atutis at 464 points. Rounding out the top five was Eric Rowley at 409 and a feature triumph.

The Rookie Sportsman divisions is made up of new drivers that can compete with an Open or Crate motor. Here is the top five; Championship was taken by A.J. Williams with five feature wins and the highest point total of all divisions at 843. Second and third were taken by two brothers and both sons of Open Sportsman and part time Modified runner Billy Spoonhower. Second went to Landon and third to Connor, Landon one win and 800 points and Connor with two wins and 635 points. Fourth was Matt Sherwood 579 points and three feature wins and here was a guy that missed some weeks. Finishing in that fifth spot was Anthony Rundell with 486 markers. Also want to mention that seventh in points was a two time winner and tallied 173 points in sporadic appearances was Tighe Sherlock.

In the Street Stock division they gave out a Most Improved Driver Award and that went to Jonathan “Pete” Fowlston who saw steady improvement during the course of the season.

They also had a Young Gun Award which went to the driver of the 34L Rookie Sportsman driver Landon Spoonhower who at 12 years old did a great job with a feature win and second in points. Certainly someone to keep the lookers on in the future.

The Spoonhower’s also gave out an award for the car owner of the year and that went to track championship owner of Tommy Collins 713 Crate Sportsman wining car. They traveled to many tracks throughout the summer and also finished third in points at Outlaw Speedway. Ran some races on the Short Track Super Series and took the car to DIRTcar big event at Oswego Speedway. The award went to car owners James Traphagen and Jacqueline Payne.

Dedication to Racing award went to Tommy Coar and Barrett Paving as Mr. Coar makes some of the Barrett Paving equipment available to the race track to help give the competitors and fans a great racing service.

Final special award went to track head flagman Gary Folk Jr..  He won the Perseverance Award. A well deserved award for a thankless job as he hears it from fans and competitors and returns each week with a smile. Job well done!

Bob Hilbert Sportswear also gave Thunder Mountain three gift certificates to give out to three random competitors in a draw for use on any of their sportswear orders. The three winners were A.J. Williams and Landon Spoonhower of the Rookie Sportsman and Modified driver Colton Wilson…

Despite rumors of the contrary Thunder Mountain will be having the 600 Modified division back as they are well supported at the speedway. Also the track will be putting in the scoring loop early Spring to bring electronic scoring to the speedway…

Track Promoter Karl Spoonhower talked briefly to the large crowd in attendance to thank them for making the Mountain their track of choice. He also thanked his daughter-in-law Sara for the great job on organizing the banquet. It was also learned Sara and her husband Karl Spoonhower Jr. will be more involved in the everyday operation of the track…

In my conversation with Sara I verified that I, along with Barry Goodband, will be back behind the microphone for the upcoming season. I also will be involved with signing on sponsorship to the largest fan count and race car support of any track here in the Southern Tier. Once I get all the pieces in place it will be full speed ahead…

The track will be at the Southern Tier Speed World show at the Oakdale Mall, the annual show at the Syracuse Fairgrounds Motorsports Expo and will be at the new returning Speedsport Showcase in Scranton. The schedules will be out then and it will be exciting…

Coming up this week I will be attending this Friday at the Motorsports Expo in Oaks, Pa. Presented by Pioneer Pole Buildings a huge show annually by Area Auto News Head Honcho Lenny Sammons. A busy booth there will definitely by the Short Track Super Series booth as there is plenty of new news and big money to be won between the series and American Racer Cup supported by Sunoco Fuels this year. Speed51 will be doing live broadcast plus returning and new tracks. Saturday will head to Albany and hopefully Saratoga Springs for the NYSSCA Hall of Fame induction ceremony and then their outstanding banquet. February 3 will be the Afton Motorsports award ceremony at the River Club in Afton, N.Y., Ticket sales was going to end today but not positive rather you could still get some or not.

As mentioned above about the race car exhibition shows I will be attending all at some point and more on them in my next installment. These shows are great for your schedules, and a close look at the new stuff and all the driver changes.