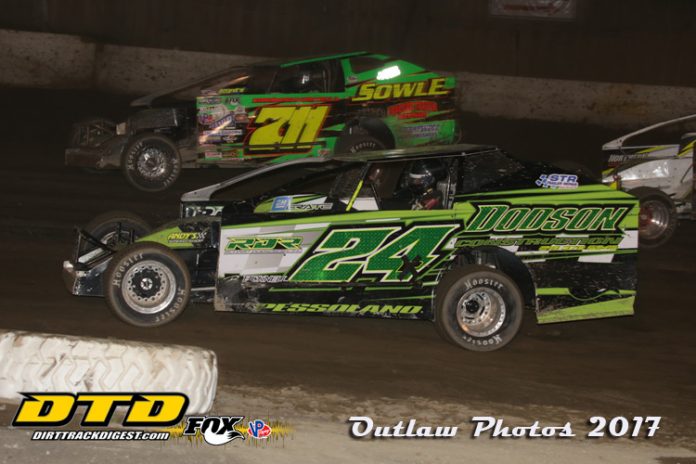 Dodson racing with car owner, Rich Dodson and his fiancee Donna Marie will move up to Big Block Mods this season with multi-time championship driver, Willy Decker behind the wheel. The team will be regular competitors at Albany Saratoga on Friday nights. Dodson will not longer field Sportsman cars. For the past nine years Dodson has provided Sportsman cars for the likes of the Pessolano brothers, Scott Duell, and Chad Edwards. In a press release this past week, Willy Decker said, “Ever since I went to Albany-Saratoga to help the RDR team this past season, I fell in love with the place.” Decker has modified track titles at Utica-Rome, Brewerton and Can-Am Speedways.

Other news concerning off season rides comes from Brett Deyo and concerns Matt Sheppard who has been hired to drive for Maryland’s Shawn Ward Racing in 2018. Sheppard and Ward will compete on the Short Track Super Series plus other high-paying special events in Delaware and New Jersey. Sheppard will have a pair of Bicknell cars at his disposal with a number of engines and the cars will sport Matt’s trademark No. 9s. The team will focus on both the Halmar International North Region series and the Velocita-USA South Region series.

This past week Kenny Tremont, Jr. met with governor Phil Scott of Vermont and was honored as the NASCAR Whelen All American Series Vermont State Champion and Devils Bowls Speedway dirt championship. Tremont and his father along with Devil’s Bowl promoter Mike Bruono and his wife Alayne met with Governor Scott in the Vermont State House in Montpelier, VT. Governor Scott is a former racer himself and was three time Thunder Road International Speed Bowl champion and said his very first race of any kind was in a USSA snowmobile event at Devils Bowl.

In an announcement on their Facebook page Glen Ridge Motorsports Park announced the first annual Racecar Show to be held at the Wilton Mall in Saratoga Springs, March 9-11. Anyone from any track that wishes to participate should contact Mike Parillo at 518-728-1837 or mrp1727@yahoo.com to be put on the list. The track also thanks it’s sponsors for the upcoming car show, Classic Muscle Parts, Elmos Speed and Supply, RCT Roofing, West End Towing and Repair, Parillo Service, Albany-Saratoga Speedway and King of Dirt. We feel it’s great to see tracks work together for the good of racing in our area and hope for this annual event to be a huge success. We hope to be home in time to attend at least one day.


For fans coming to Florida for the 47th annual DIRTcar Nationals to kick off their race season at Volusia Speedway Park they can look for 12 nights of racing and the camaraderie that comes with it each year. This year the DIRTcar Nationals runs February 6-17 and will include World of Outlaw Late Models and Sprints and the Super DIRTcar Series big block Modifieds from up north. This year Volusia will cerebrate its 50th year of racing, something that began in 1968 when a Korean War veteran, Benny Corbin, struck a deal for the small track on property in Barberville, FL. Corbin was the original owner and sold the track in 1982.

As we close this effort we want to thank Mike Parillo for notifying us of the “Excellence in Journalism” award given us at the Glen Ridge Motorsports banquet on Saturday night. We thank promoters Mike and Ray for all the courtesies given us this past season. And we also congratulate all the other award winners at the banquet.