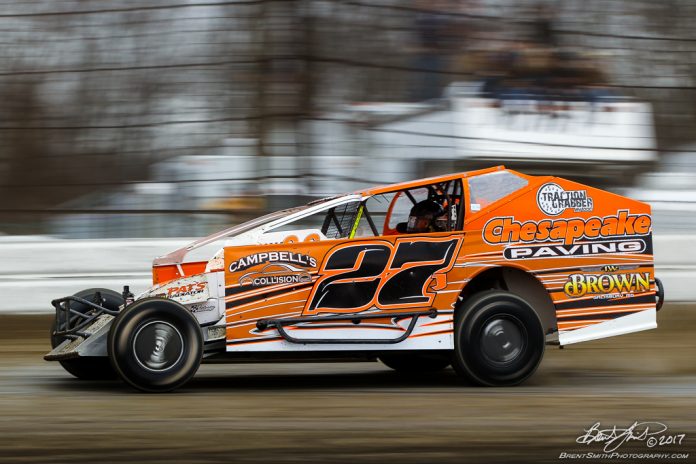 For the first time in his driving career, the “Electric Company” Ryan Watt will be heading to Volusia Speedway Park to participate in the 2018 DIRTcar Nationals. Watt who has attended the annual winter dirt series before as a spectator will be participating in this year’s series of races for the very first time.

The Boyertown, Pa., drivers career has been on an upswing for the past few years as he has become not only just a driver who competes locally but a driver who is not afraid to travel to the big races.  He doesn’t just compete with the best in the business but he’s a driver who is also able to challenge for wins on a consistent basis.

The two-time Short Track Super Series South region champion and three-time Bridgeport Modfied champion had a career year last season winning big race after big race. Watt’s victory total for last season was the most of his career when he stood in victory lane a total of 13 times along with 11 runner-up finishes. Watt’s biggest win of the season took place at the Bridgeport Speedway when the Super DIRTcar series was in town as Watt completely dominated the feature event and stole the show from the series regulars to take the checkered flag. It was Watt’s first ever win on the series and it was a win he had coveted for a long time.

Watt has done all his winning the past few years behind the wheel of the Roberts Racing Team #14W owned by Ron Roberts and Fay Lancaster out of Delaware. The Roberts / Watt combination has gotten better each year and when the team switched to Bicknell cars last year the team really started to rack up the wins and titles. While the team is busy preparing the Robert’s Racing cars for next season, the team has no plans to attend the annual winter races that take place on the dirt during Daytona Speedweeks.


Enter Chesapeake Paving owner Jeff Brown out of Delaware. Brown, who has a stable of cars in his shop, has fielded dirt Modifieds in the past for the “Doctor” Danny Johnson and his son Daniel along with driving himself has decided to take one of his Modfieds to Volusia this year. Brown then reached out to Watt to see if he had an interest in being his driver down in Florida and after a couple of phone calls a deal was struck.

I talked to Watt to see how the deal came about.

“He just sent me a text message about a week before Christmas asking me if I was interested in Florida with a question mark or something like that. I sent him a text back and he said it was Jeff Brown. I gave him a call back and we got to talking and were able to work it out. I still really haven’t sat down and talked to him yet.  We have done everything over the phone. He asked me what I wanted he told me what he had, and we figured it from there.”

The Chesapeake Paving team is busy preparing the car in their team’s shop and will be bringing the car up to Watt’s race shop soon so Watt can go over the car and put the finishing touches on the car before the team leaves for Florida.

“The car we’re taking is a Bicknell chassis with an Enders motor, so it is a combination I am very used to. They still have the car in their shop in Delaware putting in the motor and getting the rest of it together.  We are hoping, depending on the weather of course, to get the car maybe even this weekend. I know they are coming up to the Motorsports show so maybe they will bring it with them so I can take it back to our shop.”

Unlike most of the races Watt races in where he must haul the car to the track himself, this time he will just have to show up with his driving suit and helmet which is something Watt is not accustomed to.

“Jeff (Brown) is actually down in Florida right now. When it turned cold out, he shut down his paving business for the winter and headed to his home down in Florida. He still has a couple of crew guys up here working on the cars and they will be towing the car down to Florida. Myself, Lesley, Logan and most of our crew will be flying down to meet the team at the track.”

I asked Ryan if this was just a one-shot deal or if there might be more races for the new combination in the future.

“As of now this is just a Volusia deal, we really didn’t get into any other plans. I don’t even know what his plans are for year yet so who knows. Like I said before we really haven’t sat down together and talked, it’s all been done over the phone. This is a good opportunity for me and I am really looking forward to heading down there in a few weeks.”

One thing you know for sure is that as long as the equipment holds up, you definitely know that Ryan Watt will give it a 100% effort and be near the front. This is a big deal for Ryan Watt and he knows that with a solid effort his stock will continue to rise in the dirt Modified ranks.