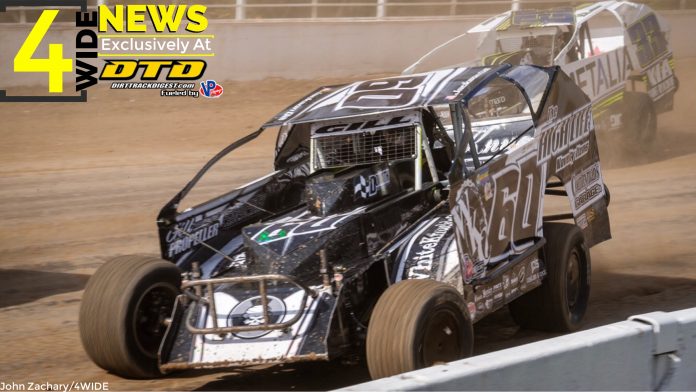 By JOHN ZACHARY – 4WIDE caught up with 14-year-old DIRTcar Sportsman driver Jackson Gill for a few questions about his young racing career.

Gill is a third generation driver and a freshman in high school. Jackson started racing Karts at the young age of five. After great success in karts, Gill was ready to moved up into the sportsman division at age 12.

It wasn’t long before Jackson found victory lane. Picking up his first Sportsman feature win at Can-Am speedway. Making him the youngest driver to win a feature at Can-Am.

4W: Moving from Go-Karts to a full size race car ( Sportsman) what was the hardest thing to get used in the Sportsman car?

JG: “The hardest thing for me to get used to is where to run the car on the track. In Go-Karts there really is only one line, and its pretty much single file racing. In a big car they’re are a lot more choices of where the car can go and cannot go. Like when the tracks laying rubber or getting more slick as the night goes on.”


4W: Are you the only race-car driver in your high school?

JG: “Ha, Ha, yeah I’m the only race car driver in my school. Alexandria Bay is a pretty small school. There are a couple kids that go to the races, but no one else races. I can’t count how many time I have had to explain what a feature is.”

4W: Who has helped you with the transition from Go-karts to Sportsman? Like driving advice, and car setups?

JG: “My Uncle Bill has been a huge help to me ( This is where I get the number 60 from). He has helped men from day 1. I wouldn’t be where I am right now with out my Uncle Bill. Everything I know about driving a car and a lot of our set ups come from my uncle.”

4W: Where in your racing career would you like to be in five to seven years?

JG: “I would hope to be out of the Sportsman class, and into a small-block or big-block. I do not want to move up until I have proven my self in the Sportsman division.”

4W: Jackson why do you think the Sportsman class is growing so fast? And where do you see it in the future?

JG: “I Think the Sportsman class is a great class. It is very competitive, and with the lower horse power engines, it is a great way to learn how these cars handle. I do think the class might die out because a lot of tracks are going small-blocks. I still think this class is one of the most competitive classes because the cars are so similar.”

4W: If you had a chance to drive any other type of car what would it be? And why?

JG: “I would love to run Sprint Cars, even though I don’t have a clue on setups, they look like they would be fun.”

4W: Thank you for your time Jackson what are your plans for the up coming race season?

JG: “Our plans are up in the air right now. We are planning on running Can-Am weekly because it’s so close to home. We want to run a second track, but we are not sure where yet.”

4W: Would you like to I give a shout out to the people that help you through out the year?

JG: “I would like to thank Highlife Novelty Items, Focal Point Frames, Atomic Sign Works, Countryman’s Garage, White Knuckle Clothing, and all my family and friends that have supported me through out my racing career.”