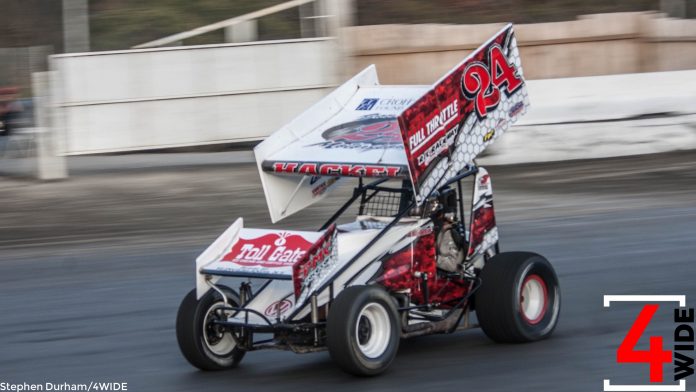 As we enter the midpoint of the off season it is a good time to check in with Bobby Hackel. Hackel, out of Greenbush, N.Y., has become a staple of modified racing in the Capital Area as well as at Devil’s Bowl Speedway in Vermont. When Bobby is not behind the wheel of his familiar #97 modified he has been hitting the road in the Brandon Wright Motorsports #24 Sprint Car.

BOBBY ON ADAPTING TO SPRINT CAR RACING:
“The biggest thing that I have had to learn is driving these winged sprint cars in traffic. Sometimes you have to really go outside of the groove or find a lane of your own because getting the correct downforce is so important.”

BOBBY ON HIS GOALS FOR THE ’18 SEASON:
“Going into this season my goal is the same whether I am strapping into a modified, sprint car or anything open wheeled and that is to always move forward with our progress while trying to collect our teams as many checkered flags as we can. In 2018 I will continue to drive for Brandon Wright Motorsports in his #24 car and we plan to race as much of the CRSA 305 Series as we can that doesnt conflict with my Modified Schedules and as funding allows . We are also planning to run a part time schedule looking to make 360 Shows with ESS , Patriot , and Scone Series .”