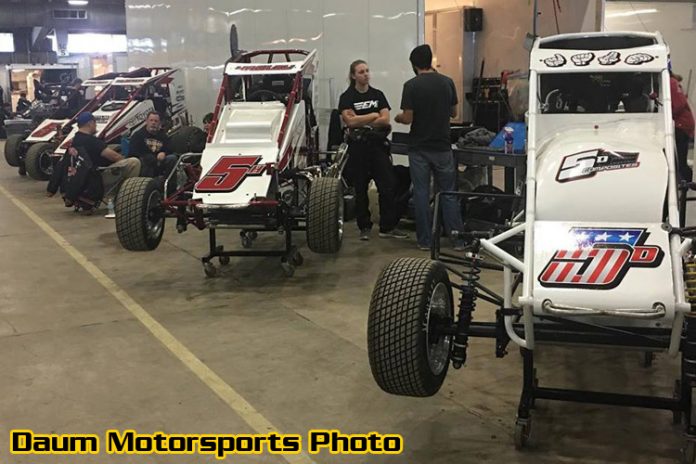 The three-time POWRi national Midget champion out of Pocahontas Ill., had 14 wins , 81 top fives and 116 top 10’s out of 156 starts. He however was looking for a better outcome in this years Chili Bowl after leading the race on his qualifying night.  He got messed up on the cushion and was unable to qualify through the lower mains on Saturday.

Daum is heading the New Zealand next to race so before he left I caught up with Daum to see how he thought the 2018 Chili Bowl went for him what tracks he is racing in New Zealand and how his 2017 racing season went.

Dirt Track Digest: How did this years Chili Bowl Nationals go for you?

Zach Daum: “I don’t think we went that great.  We were fast but had no luck. We were leading until Lap 20. Lap 20 kinda ended our Chili Bowl due to getting into a incident with a lap car flipping with five to go.”


DTD: Do you plan on going back next year?

ZD: “Yes we will there every year”

ZD: “Started off the season okay.  The middle of the season we were going good we were leading the points until a bad crash that got me a concussion which had me sitting out for two months until I went to New Zealand on November 17th.”

ZD: “We are going to do the entire POWRi season to try to contend for a another title. We are also going to do as many non and winged Midgets races as we can.”

DTD: So your heading down to New Zealand in a couple of days what car are you going to be driving there?

DTD: What tracks are you planning in running down in New Zealand?

ZD: “Western Springs and Huntley. In March I am going to be running Palmer Spring North and Bay Park”

DTD: Is there anybody you want to thank for the fun you had on 2017 and the upcoming 2018 racing season?

DTD: Do you have any social media pages where race fans can follow you in 2018 season?

Make sure to keep track of Zach while he is in New Zealand. Hopefully he can get that first win of 2018 down there! If you have any suggestions, questions or comments feel free to email me at hunterhorton27@icloud.com!