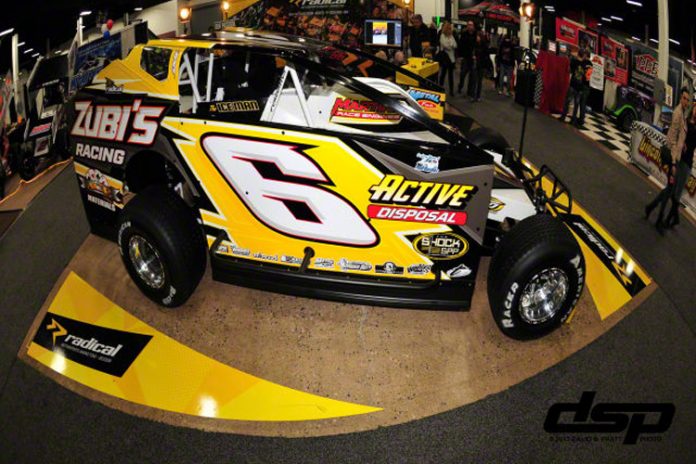 Zubi’s Racing owner Dave Zubikowski has always been one to keep himself busy. Along with running his burgeoning race team, the Port Jervis, N.Y., resident also works a full-time job and if that isn’t enough the man they just call Zubi is also in the midst of helping his sister build a home.

The 2018 racing season is coming up quickly and when it starts the Zubi’s Racing team will once again be out in full force. Just like last year, the main focus of the team will revolve around “BK Speed” Brian Krummel.

Krummel will be back behind the wheel of the No. 17z and will focus on action at the Grandview Speedway looking to improve on his tenth-place points finish in 2017. Krummel was able to win his first ever feature event last season at the speedway and with a full year of experience running at the Bechtelsville, Pa., oval expect Krummel to add to that total.

The Zubi’s Racing team will also be chasing points in the Short Track Super Series North Region and will be looking to do some of the South Region series as well. The team also plans to make some appearances at the Orange County Fair Speedway with there big-block when their schedule permits or if Grandview should be rained out.


The team is also fielding a car for long-time Orange County Fair Speedway competitor Tim Hindley. Hindley drove for the team on occasion late last year but this year look for Hindley to be more involved with the team. A schedule has not been set for Hindley, but plans now are for him to run a few shows at Grandview along with some races at OCFS. Hindley will also do some testing for the team as they look to improve their results in 2018. Hindley’s number will be 1z.

As if fielding his own teams aren’t enough, Zubikowski has also committed to helping Modified rookie Matt Stangle on the STSS South series as well.

“Matt is a good kid and completely dominated the Sportsman division last year and wanted to move up,” stated Zubikowski.  “This whole deal is being done in the memory of Pete Gardner who was a great friend to all. Pete would always tell John (Stangle) and myself that we needed to meet up because we are the same people. So, since Pete’s funeral I have been talking to John more than twice a day and guess what, Pete was right on because we are like family now. We split the car, John has a motor and I will be helping out with the fuel and the tires. It will be a good deal for everyone. The kid definitely has a ton of talent and once he gets the needed experience he should be right up near the front.”

“We bought a TEO car at the end of last year for the Eastern States race and Brian just loved it. We plan on using that car once again with our big-block in it for this year. I was loyal to Jerry (Hig-Fab) for a lot of years and we ran his cars exclusively, but we thought as team we were getting stale and needed to make a change to get better and further our program along. We talked to both Bicknell and TEO and TEO made us the better deal, so we went with them. Brian is really close to Bobby Hearn so it all worked out for us. Right now we have two TEO’s in the shop and I plan on ordering two more once they get back from Florida where they are going to test out a few things. It will also help us running the TEO car at Grandview where there is more knowledge available out there for us to pull from. We are really excited to see how this year goes.”

Power under the hood for the TEO cars will come from a multitude of sources.

“We have one Precision motor that is in the process of getting redone. We have a 358 spec motor from Morrison for Grandview and are looking to get another but I haven’t decided yet where it is coming from. I have a meeting tonight with a guy, so we’ll see how that goes first. I also have a brand new open small-block being put together for the STSS right now. I am also looking to get another big block-motor so we can run both Brian and Tim at Eastern States this year which is actually what I am meeting the guy about tonight.”

It takes a lot of money to put all this together and without sponsorship none of this is possible. Coming aboard this year in a big way to help the Zubi’s team will be “LOBAS Productions”. LOBAS Productions is a company owned by Dave’s sister Alicia Zubikowski. The LOBAS Production team is on the cutting edge of providing quality cinematography to make your story come alive. Please check out their website for more information on the company at www.lobasproductions.com.

“Without all of our sponsors, none of this would be possible and I can’t thank them enough for their support of Zubi’s Racing.”

2018 is shaping up to be the best season yet for the Zubi’s Racing team and if hard work is any indication of success the future does indeed look bright.