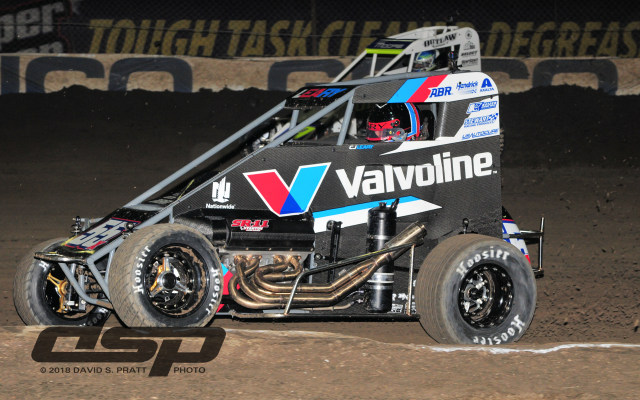 CJ Leary was the 2013 Track Champion at Lawrenceburg Speedway and an eight-time feature winner in the 2017 racing season. The driver out of Greenfield, Ind., was making it a show at the Chili Bowl he came from Indy to the beach and unfortunately when he was pushing out for the B the rear-end and broke. I caught up was CJ to chat about the chili bowl, 2017 racing season and the upcoming 2018 racing season

Dirt Track Digest: How did the Chili Bowl Go For You? Will you be back next year?

CJ Leary: “The Chili Bowl was interesting we had some fuel issues on practice day we started sixth and won the heat race and then we also started sixth in the qualifier and ran second again to Christopher Bell.  We started fourth in the A-Main got to second and then spun out on lap six. We started on the pole in the D and won that, started 17th C-Main and got sixth. While we were pushing out for the B-Main the rear end broke.  We will definitely be back next year”


CJL: “It was slow I was working with Jeff Walker we weren’t really gelling together and we split ways.  I partnered up with Donny Gentry and changed shocks from Super Shocks to Pro Shocks and everything really clicked once we changed things. We didn’t start winning races until Sprint Week.  We won Lawrenceburg which was second race Donny I were working together, Kokomo Smack down, Gas City Sprint Week,  Montpelier and we won the Four-Crown at Eldora which was on my bucket list. We started it slow but ended up with eight wins.  I am not ashamed on anything we did this season”

DTD: What are your plans in the 2018 racing season?

CJL: “We plan on running all the dirt races for USAC Sprint Cars and Silver Crown and we will be racing some other non-winged races and some winged races also.”

DTD: Do you have any social media’s where fans can follow you in 2018 season?

Make sure you keep your eye out in the midget division for CJ Leary!