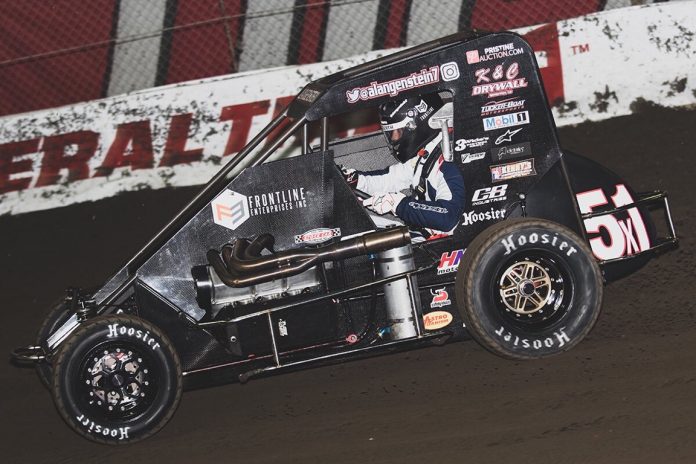 When the opportunity arose for Austin Langenstein to drive for Tucker-Boat Motorsports in the 2018 Chili Bow it was an opportunity the young driver originally from Scranton, Pa., couldn’t pass up. Langenstien who now calls Charlotte, N.C., home was beyond thrilled to have the chance to drive for the veteran team in one of the most prestigious dirt races run in the United States.

The 27-year-old driver had never strapped himself into the seat of a dirt Midget before arriving at the Tulsa Expo Center prior to practice on Monday but Langenstien knew he had the talent and confidence to be able to pick up on it very quickly. Langenstein has had some experience racing on the dirt but it was very little and quite a long time ago and to top it off, due to his busy schedule working at HMS Safety Products Langenstein, hadn’t raced a car at all since driving his legend car last July at Charlotte Motor Speedway.

I had a chance to chat recently with Austin at the 2018 Motorsports Racecar and Trade Show in Oaks, Pa., about his recent Chili Bow experience and you could tell how much the young driver enjoyed the experience and how much he is looking forward to returning in 2019.

“I am telling you my first Chili Bowl experience was a dream, honestly I was pinching myself all week, especially on Tuesday night.  I had never even sat in a Midget car until Monday for practice and when I went out for practice I felt right at home. We only had two five lap sessions of practice on Monday but when we were finished I felt like I had the confidence I needed going into our qualifying night on Tuesday. I have always been a confident driver and believed in my abilities and after practice on Monday I felt I sort of validated that.”


When Tuesday night came along Langenstein was ready to rock and roll. Finishing second in his preliminary heat locked him into one of the “A” qualifiers for the night and even though that didn’t quite go as planned Austin was still very happy with the results.

“To finish second in my very first heat race was awesome, I made a few mistakes but was able to overcome them and get a good finish. The A qualifier didn’t end up to well, I thought I was running well enough to make the A-Main and then I jumped the cushion and that set us back. It was a rookie mistake, but overall I was very pleased with how the night went. I mean, man I have never even sat in a Midget before and now I am racing against drivers who raced in New Zealand just a few days ago and have much more seat time in a midget than I do.”

After four nights of qualifying action was completed it was time Saturday for alphabet soup races to begin. Austin’s qualifying night results saw him placed into the E-Main on Saturday night making it a difficult road for him to navigate to get into the night’s main event.

Austin’s first Chili Bowl experience ended on Saturday when he spun in E-Main losing any chance to move into the D-Main but it was a week he will never forget. Austin is determined to be back next year and with the possibility of gaining some more experience driving in a dirt Midget, I would surely expect him to be in the mix for a spot in the big show in 2019.

“We’ll take it for this year, I think we opened some eyes and showed what we can do. Mr. Brett Stevens from Frontline Enterprises gave me this opportunity. Chad Boat and Tucker-Boat Motorsports gave me a great race car and I know they gained some confidence in me and I know we’ll back in 2019 to give it another run. I am trying to put together some deals to run it a few more times later this year and if not at least be able to do some testing so I can get some more laps and experience. I feel comfortable now, but it always is good to get some more seat time. You never stop learning driving any race car and this no different.”

Austin is currently working on some plans to do some more racing in 2018 that he did last year and hopefully we’ll hear something from him soon. I have had the pleasure to talk to Austin on more than a couple of occasions and let me tell you, the young man has confidence in driving ability and knows how to drive a race car but more importantly than that Austin respects the sport and the people in it and when you talk to Austin he shows you that respect.