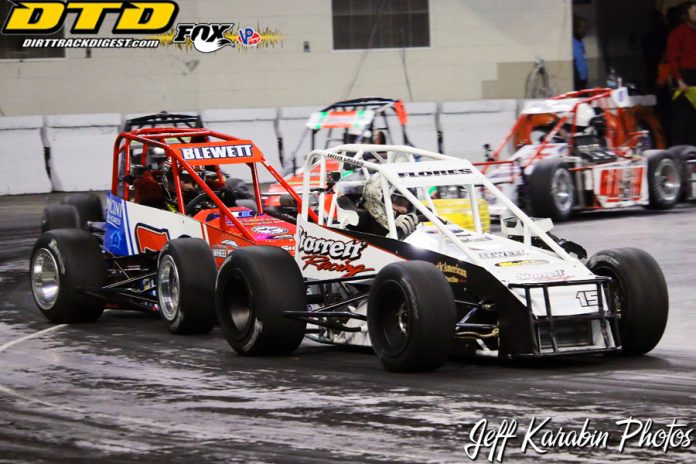 Ryan Flores and Jimmy Blewett are two of the closest friends in the pit area. The pair of New Jersey drivers race out of the same stable during the Indoor Auto Racing Series fueled by VP Racing Fuels. On Saturday night, in the Annual Gambler’s Classic in Atlantic City, the potent duo finished in spots one and two giving them a sweep of the most prestigious event on the indoor series schedule.

“The Gambler’s Classic has been the biggest thing on my mind the last four, five years since I bought the car,” commented Flores, the now three-time indoor series race winner. “This was our fourth shot at it and we’ve been close every time. I grew up two blocks from the beach in Manasquan, N.J., I grew up racing at Wall Stadium. I never thought I’d make it past Street Stocks or Legend Cars. I’ve been very been blessed and very fortunate to come and do this and to have great friends like Jimmy Blewett and a great family that comes and helps out. I’m so excited to close it out for them.”

Flores went on to talk about his relationship with the Blewett family and how special racing with Jimmy has been. Especially now that they finished first and second in the Gambler’s Classic.

“I started to spot for Jimmy when I was 14-year-old,” stated Flores. “I went through a rough patch when I was 14 with some family stuff. He took me in, along with John and they really helped me out there. It was a time in a man’s life when you really need a lot of help developing character. I love him to death. He’s like a brother. We’ve been through a lot. We lost his brother, his mother together. We’ve been through everything. To be able to come and do this. You don’t have friends that are like that very much. To be able to finish one two with him is awesome.”


To continue reading CLICK HERE the column on PavedTrackDigest.com.