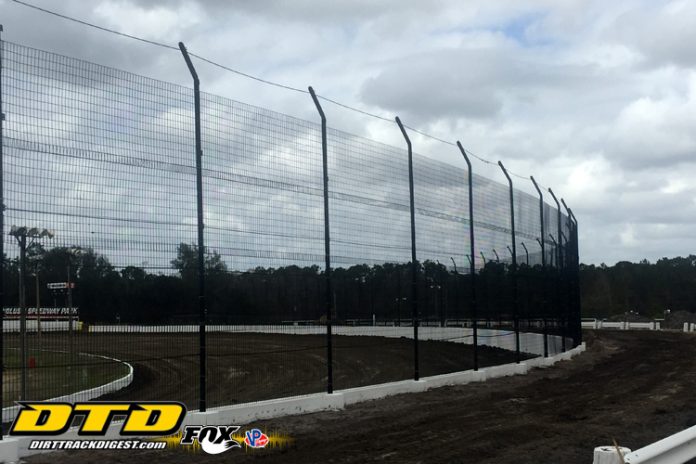 Before the curtain rises on a big show do we know what it takes to put it on. In a very few days the DIRTcar Nationals will take place at Volusia Speedway Park, starting February 6th We stopped in at Volusia Speedway Park this past week and were able to witness just some of the improvements and upgrades being made to the historic oval. We found many people working on many projects. As has been reported there is a new concrete wall running around the outside of the track from turn one into turn two. This new wall sits at the edge of the track and supports a new 17 foot high catch fence reinforced with steel cables running horizontally across the fence. Continuing with this project into turns three and four the steel guardrail has been replaced or rebuilt and new posts were embedded for added support. Atop this guardrail also sits a catch fence. In addition there are many other visible improvements. We did notice no one was wearing a suit and sitting in the office.

DIRTcar Racing President, Tom Deery and Director of Events, Jeff Hachmann were both dressed in work clothes because they were both busy working. Tom doing some building around the sign-in trailer and Jeff putting up some of the new signage. And we thank them for the time they spent with us. I guess if we had been one day earlier we would have found WRG, CEO, Brian Carter at the track also. There was also work being done on the track surface, in the infield and around other areas of the track. We did also get to talk with long time DIRTcar electrician, Dave Dixon, who was also busing working the day we were there. We saw his ladder up against one of the poles where he was working on the speaker system in the pit area. Dave arrives at Volusia in early January and keeps everything in running order during the big event.

We know many tracks are trying to improve their facilities but sometimes the funds are limited. With what is being done at Volusia the price tag hits $300,000. If not for World Racing Group this would not be possible for the Barberville, Fl. half mile oval. Seems we alway hear negative comments about tracks and promoters. Maybe a few more comments as to what is done right would be more beneficial for our sport. Everyone who knows us is aware of our love of the history of racing. While in the Birthplace of Speed we find some very interesting things that catch our attention. On Friday afternoon on our way back from Volusia we stopped at a Walgreens. While exiting the store we spotted a most unusual pickup truck. Actually it wasn’t the truck that was unusual, it was that the entire truck was wrapped with racing history talent, mostly road racing because it was the Rolex 24 at Daytona weekend. We stopped to snap some photos and while there we saw what appeared to be the owner coming toward us. Tara Waltman pointed out the photo of her father, George Waltman and started to tell us his story when we realized it was a story we had read in the Daytona News Journal earlier in the week. In 1968 George Waltman became the only driver to ever complete the 24 Hours at Daytona solo. As the News Journal story reports, in 1968 Waltman, a British Airways pilot took a car, a 1964 Morgan Plus 4 street car, that a friend had found in a police impound lot in the Bronx, drove it to Daytona and raced in the 24 Hour event, finished the race and then drove the car back to New York. This year’s event is the 50th anniversary of his feat that also broke a Daytona International Speedway and sports car record and in honor of that, Tara had the wrap done for her 2007 Toyota pick up. The seventh annual beach parade on Saturday, February 10th will take on a new twist this year as an historic marker will be placed in Winterhaven Park, signifying the only portion of the old A1A that was used in the ‘40’s and ‘50’s still remains. Staging for the parade will begin at 7 a.m. in the parking lot across the street from the Racing’s North Turn Restaurant at 4511 S. Atlantic Ave and spectators will be able to see the cars and meet the owners and drivers at 8 a.m. The marker placement ceremony will take place at 9 a.m. and the parade follows at 10:30. Immediately following the parade, an autograph session and interviews with the drivers and VIP’s will be done by Chocolate and Caron Myers inside the restaurant.

We send our condolences to the entire Varin family on the loss of their mother and grandmother Jackie who passed away this past Friday.

We look forward to seeing our many friends that come from the north to Daytona for Speedweeks. Until next time please send all news and/or comments to biittig@yahoo.com