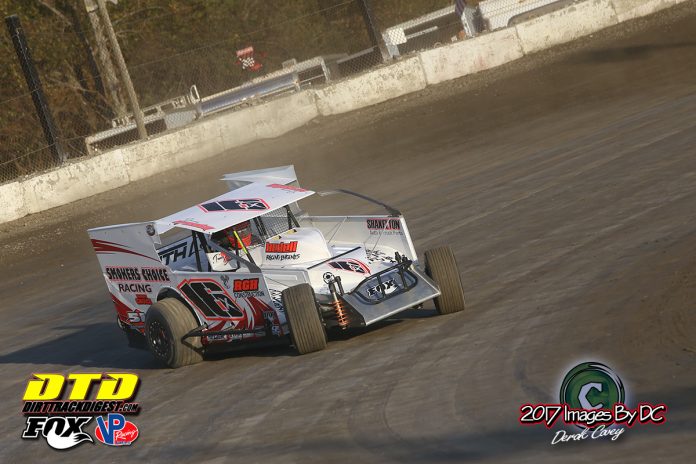 It’s always been a dream for any racer to have the equipment available to race pretty much whenever and wherever they want to go.  In 2018 that will be the case for veteran drivers Danny Creeden and Mike Gular. Both drivers will have the opportunity to race multiple cars for different owners to make it a busy 2018 but neither driver would have it any other way.

The man they call the “DC Express” is a veteran driver who has won at multiple tracks over his career along while taking a few track championships along the way, but in 2018 Creeden will hitting the road with what he calls the opportunity of a lifetime to do what he loves to do best, race.

“I have never had so much opportunity in my life to race like I will this year. We’ll be able to do some good racing. Chad Loiodice and his friend and our family friend Bill Reagan have stepped up big this year to make all this possible for me. Between the two of them we will have plenty of equipment to race with this year.”


Creeden hasn’t set his full schedule yet but it will definitely be a busy one for sure.

“We will be definitely be running Accord on Friday night’s and run the full Deyo series, both North and South regions. Saturday night’s are yet to be determined but it looks like it will be between Thunder Mountain, Five Mile Point or New Egypt. I also have another guy who I am going to run some big-block races for so by the end of the year we should have around 80 races in.”

To attempt a schedule like this will take plenty of equipment and Creeden explained that there shouldn’t be any problem when it comes to that.

“Between both Chad (Loiodice) and Bill (Reagan) we will have three brand new TEO’s for me to use. I have two of the new cars at my mom’s house where our shop is, and Chad has one at his house which is only about 15 minutes from there so that is good. Chad also has a 2017 TEO that I won with last year that we are going to put in a spec 358 for some races. Matt and Bobby (Hearn) are back on board to give us all the help we need when we need it, so it should all be good. I am still good friends with Jerry Higbie and my father in-law still has a Hig-Fab car so all is good there.”

Power under the hood shouldn’t be an issue for the team as they are well prepared for any engine combination they will need in the year ahead.

“I think between both Chad and myself, we have about eight engines available to us. All of Chad’s stuff is from Morrison and all mine are from Dan Bedell and they are all good pieces. Chad has one of his motors up at Morrison’s now being gone over and Dan (Bedell) has one of my motors at his shop getting all freshened up so we should be ready to go once the season starts up.”

Getting all these cars to the track won’t be a problem and with such a busy schedule planned it is very important that you have the crew to help you not only at the track, but in the garage as well and Creeden thinks that they should have that covered.

“Chad has his stacker trailer and toter and I still have my truck and trailer so we are set when it comes to getting the equipment to the track. I have a great bunch of guys who help me out all the time. There are a couple of retired guys who help me out and they are really good. I have Chad’s son Charles who is only 14 and all he wants to do is race so we got him a crate car to race and he will be on the road with me a little bit. We have another guy who works Sunday through Wednesday, so we will drag him with us Thursday through Saturday’s. We are going to be busy as hell for sure and I am going to be really tired by the end of October between racing and chasing my little four-year-old daughter around.”

Creeden does have one race on his schedule that he would really like to win this year and is definitely planning on trying to make that happen in 2018.

“The one race that is on my bucket list that I really want to win before my driving career is over is the (Freedom) 76er at Grandview Speedway. Most drivers will tell you that the one race they would like to win would be the 200 on the (Syracuse) Mile, but mine has always been the 76er. I don’t know why but it’s the one race I truly want to win. I attempted to qualify for it once but caught up in a scramble and didn’t make it so I want to get back down there and try it again.”

It will definitely be a busy 2018 for Creeden but with the support he has from his car owners, his crew and especially his wife Tania and their daughter Sadie it should be a season to remember for the veteran driver.

After picking up the ride in Terry Fasnacht #44 midway through last season, Mike Gular and the team set out to compete whenever and wherever possible. Although Gular wasn’t able to pick up a win racing around the Northeast, he was able to have some very good finishes with his best finish of third coming at Afton Motorsports Park during the running of the Short Track Super Nationals. Gular had many other impressive runs throughout the postseason prompting the team to have quite a bit of optimism going into 2018. Along with the Fasnacht ride, Gular will also remain behind the wheel of the #2 Rich Stankiewicz Roofing car on Saturday nights at Grandview Speedway to chase the track’s championship. Both cars this year will carry the number two and Gular is looking forward to the opportunity the presents himself for the season ahead.

“We are going to be a busy team this season. We are committed to running Grandview in the Rich Stankiewicz car and we will be running Terry’s car in the Deyo North and South Series. We will also get to some of the big paying specials at Big Diamond, New Egypt and Bridgeport and maybe try some of the Full Throttle Series races at Delaware. The series cars will be numbered #2A for Terry and the Grandview car will remain just the #2. With all the midweek shows, committing to running on Friday night’s is just not possible right now.”

Gular will be a busy man this season with the expansion of the Fasnacht team. Between both teams Gular will have a total of four cars and that will surely lead to quite a bit of shop time for himself and his crew.

“It’s going to be an undertaking for sure this season, myself and all the guys that work on these cars have full-time jobs so it’s not going to be easy this season with the aggressive schedule we have planned. We do think we have a nice schedule worked out for the guys, so we want to make sure we don’t burn anyone out during the year and that’s important. The only constant that will probably be at all the races will be me of course. It’s going to be a lot of nights getting home late and some lazy days at work the next day for sure. We have a great support group of people that want to help us out between crew help and sponsors, so it is all shaping up for us to have a good year.”

After doing some traveling early in his career Gular has pretty much limited his racing to one night a week at Grandview Speedway. This year will be much different for the Boyertown, Pa., driver and he is looking very much forward to getting back out on the road again.

“I am very excited to get back on the road and go to some different tracks again this year. I was able to do it years ago and I thought I did well but sometimes the cards don’t work out for you to be able to race all over and you have race where the car owners want to race and where it’s feasible. This is a great opportunity for me and you don’t get a chance like this too often and I want to make the best of it.”

The team will have a plenty of equipment to make it all work out and will have the ability to utilize any possible engine combination they’ll need to be successful depending on the track.

“All of our cars are Bicknell chassis. The Stankiewicz car will be just used for Saturday nights at Grandview so we keep it fresh and we will use Terry’s cars at all the other shows and the Thunder on the Hill Shows as well. We have a brand-new Morrison big-block motor for one of the cars, we also have two Nick Gatto 358 spec engines along with a brand-new Nick Gatto open small-block, so we should be all set for whatever track we are running.”

With the experience Gular gained at the end of last season by running different tracks, that experience should only make him a more well-rounded driver as he heads into 2018. I wouldn’t be surprised at all to see Mike Gular standing in victory lane at a track near you in 2018.