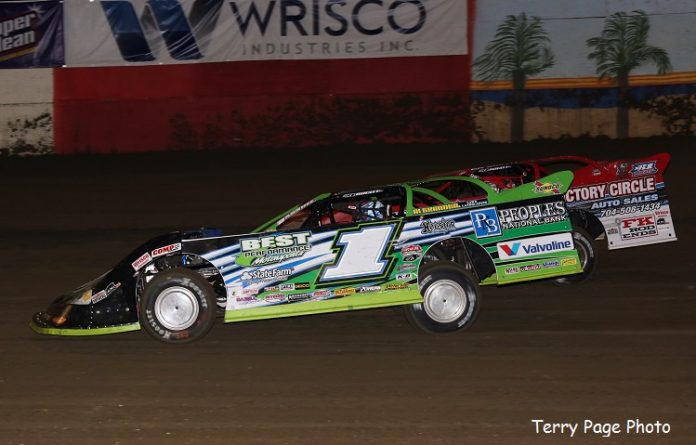 “Kid Rocket” Josh Richards has already been down south for about a week now testing his car and getting it ready for Golden Isles Speedway in Georgia. Richards had a fantastic 2017 season winning the 2017 Lucas Oil Championship beating veteran Scott Bloomquist and Tim McCreadie on the final night! I was able to catch up with the Josh before this weekend races in Georiga.

Dirt Track Digest: I saw you been testing down south the last week or so.  How is testing going for you and your team? Have you learned anything new while you are down there?

Josh Richards: “I think everything has been going pretty well.  It is just getting back in the rhythm of things and just learning your car and team.  Getting a feel of what you want and what you need getting all the stuff put behind you and using it when it comes time to race and make those decisions. You are constantly learning.  We have a brand new car and it’s a little different then we had before so we are learning with that.”

DTD: How did last season treat you?


JR: “Last Season was phenomenal.  I couldn’t ask for better year switching teams and switching series and going to all the different tracks. I think we could’ve done a little better. I don’t think a racer is truly satisfied, but we are definitely pleased that everything worked out. We had a really fun year and a great time and went to a lot of cool tracks.  We won some cool races. You’re always trying to be better though.  I feel like there were some tracks that I could’ve done better at. Going into this year though it just makes it that much more exciting.”

DTD: Going back to championship night at Portsmouth, Ohio, did you think you were going to come out the championship at the end of the night?

JR: “I felt okay.  I wasn’t really thinking about the championship too much. We had a pretty decent lead when we blew a tire at Knoxville and went to Dixie and Rome and had pretty bad performance.  That put us behind.  It put us in that position with Scott Bloomquist and Tim McCreadie. We went to Pittsburgh and gathered back up and had another good night at Pittsburgh.  We were still trying to figure out if we had the gremlins behind us.  We couldn’t figure out what was going on we were just hoping we had put that behind us when you got time to race. After we got through heat race I felt really comfortable with what we had going into the race.  I don’t know if we have any expectations going into the race other than to just do that best we could and it certainly couldn’t have ended any better. I don’t think we could’ve ended off the season on a better note with winning not just the race, but the championship as well.”

DTD: Do you think you can get back to back championships?

JR: “I don’t think I have a better chance this year then I did last year. There’s a lot of great competitors.  It’s a whole new year. We’re starting the season off from scratch.  We are going to have to earn everything that we can to put us in that position this time a year.  I certainly don’t think nor I don’t think you can. You just have to focus on each and every day.”

JR: “I just can’t thank everybody enough at Best Performance Motorsports, Valvoline, Andy Durham Racing Engines, Integra Shocks, Rocket Chassis and Alexandra Wand. Randall, Gab and everybody on our car. Hopefully can try to do it again we will do the best we can and make them proud.”

DTD: Do you have any social media’s where fans can follow you in The 2018 racing season

Make sure to follow Josh’s journey as he chases another Lucas Oil Championship.

As always you can reach me at hunterhorton27@icloud.com with any comments suggestions etc!