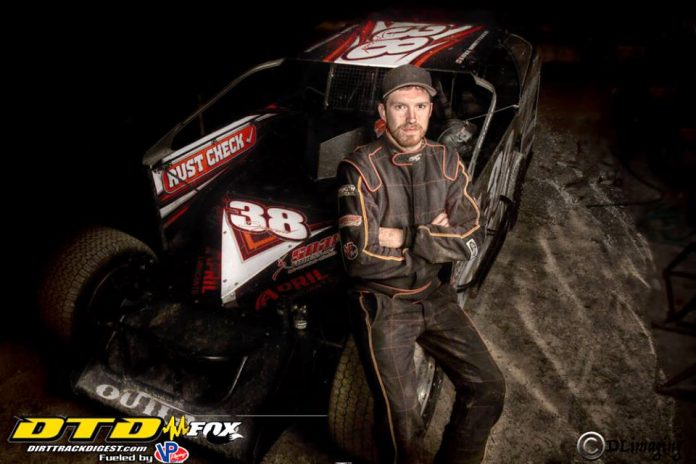 As long as I can remember, the number 38 has been synonymous with Luke Whitteker, the young 24-year-old from Iroquois, Ont. Luke has worked tirelessly for over a decade to learn the skills needed to take on the best that dirt track racing could offer. He finally reached one of his goals in 2017 by capturing the track championship at the Brockville Ontario Speedway.

His journey began back during the summer months in 2005, competing in Kart racing at the local Brockville Speedway, along with racing indoors at Syracuse, N.Y., in the winter months.

Luke continued to move forward with his racing program, transferring to the Sportsman Modified ranks and attending the Pete Bicknell Racing School in 2008 and 2009.

A few years later, he attended Race 101, a school based in North Carolina where he received top honors upon graduation. In 2010, Luke in his inaugural year in the 358-Modified class, was awarded Rookie of the Year by DIRTcar at the annual banquet. Luke racked up 10 top five finishes along with two wins at the now closed Autodrome Edelweiss.

For 2011 Luke began the season driving the 358-Modified of Clement Henri Racing, however by mid-season, because of low seat time, the Whitteker family decided to ground their car for the rest of the year. Later that season, Whitteker would be awarded with the Rookie of the Year honors at both Autodrome Granby and Drummond Speedways.

The Whitteker family would continue to race in the 358 class while Luke attended Carleton University in his four-year engineering program.

During those years at Carleton University, Luke became involved in “Ravens Racing,” a program comprised of engineering students of multidisciplinary ranges. Luke was assigned to shock design and maintenance as well as driving duties. The Carleton team fielded a race-car in May of 2016 at the FSAE event at Michigan International Speedway. The team finish 13th out of 120 teams, not bad for this small dedicated team from Canada.

The team would also finish second in points at the Cornwall Speedway and, if not for some bad luck, they probably would have won the championship there as well.

The 2017 season was a banner year for this newly formed team. With Luke doing the driving duties along with car setup, car owner Ralph Murphy explains, “it was a storybook year at the Brockville Speedway. Everything seemed to fall in place. The team had good chemistry and a lot of dedication and hard work. We all had one goal and that was to win races along with the championship. Not bad for the first season of this new team.”

As the team prepares for the upcoming season, Ralph confirmed the team would run Brockville on a weekly basis along with some big money shows as they come up at other local tracks. The final schedule is still to be determined.

Whatever the team decides, I am sure that same team spirit from last year will continue in 2018.