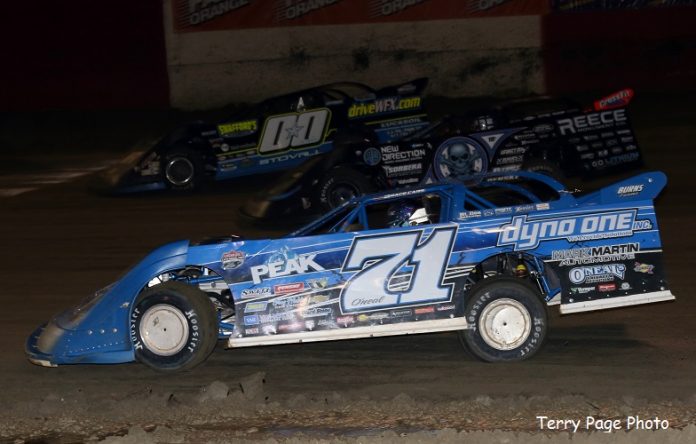 Young gun and 2017 Lucas Oil Late Model Series Rookie of the year Hudson O’Neal of Martinsville Ind., almost had his career first win on the Lucas Oil Late Model Series. O’Neal started 17th and got up to second and was all over leader Josh Richards in the final stages of the race. On the final lap he threw a slide job and had him; but unfortunately the caution came out. When the race restarted Richards was able to protect the bottom lane and capture the win. I was able to catch up Hudson after his phenomenal finish Friday night.

DTD: Even though you didn’t get the win how was last night (Friday)?

Hudson O’Neal: “You know it was really good; it was unfortunate with how the night started. We didn’t qualify really well and started deep in a heat race. We were lucky and transferred out of the heat anyways. It all ended up pretty good; unfortunate that we came up one spot short but there is always tonight (Saturday)”

DTD: Was the car good early in the night or did you have to make some adjustments throughout the night?


Hudson O’Neal: “We just weren’t very good at the beginning of the night. We continued to work at it and continued to make gains in the right way which what matters. We continually got better. I think we are going to be sporty tonight (Saturday) and hopefully compete for a win.”

DTD: Being Rookie of the Year in the Lucas Oil Series what are your expectations for this year being your second year?

Hudson O’Neal: “The biggest thing is to go to every racetrack and improve. As long as we can do that; and just improve our finish from last year. We had a lot of good runs last year as long as we can go back and keep improving and hopefully come out with a couple wins this year. We didn’t win any last year. I think as long as we keep improving and keep working away at this deal; my team is getting better and better every week. I’m getting more experience as we go to different racetracks. I think it’s all finally coming together. Hopefully hit a hot streak here before long and hopefully pick off a couple wins.”

DTD: How did the indoor races treat you this year? Such as the Chill Bowl and Gateway?

Hudson O’Neal: “Gateway is a really really cool deal that Cody Sommer’s puts on. It is just a really unique deal. It’s really cool to have my win there to be my first National race win. That was just really awesome. I’m looking forward to going back and I think that deal is going to continue to grow and get bigger. It could quite possibly be one of our biggest if not our biggest race on our schedule. The Chill Bowl is unique also. It is something that I will never miss now. It was really cool to go out there and be a part of it. Just to be there and the atmosphere and the electricity around the building is really really special. I had a good team. They made me look really good. I am really excited to run a few midget races this year and hopefully get back out to the Chili Bowl next year”

DTD: Going back to the 2017 season how did that treat you?

Hudson O’Neal: “It was really good. I think by far we exceeded our expectations. Just to win that rookie deal is really special. It sets the bar going into this year. It is just really unbelievable; we got so far behind there in the beginning of the year. To battle back like we did and winning it. Just really incredible and a true testament on how hard this team works at the shop. They are all working their tails off for me and I’m doing all that I can for them. I think it’s going to be a really good year. I hope we are starting off right. So long as we can keep the ball rolling in the right way I think we are going to be alright.”

DTD: Why did you start racing with the Lucas Oil Late Model Series?

Hudson O’Neal: “It really wasn’t all me. It was great to go out there and run a national tour like we did last year. We all had our doubts about the whole deal; being my first full year in a Super (Late Model). My car owner (Todd Burns) really wanted to do it. It is car owner’s choice. He wanted to go to Florida and see how we racked up against those guys. We came out and did pretty good down in Florida. We struggled for the first half of the year when we got done with Speedweeks. We all pulled together. It was my car owner more then anything. He wanted to get out there and compete against the best guys in the country. It was really all him and you have him to thank for that. He always says you are only good as your competition. When you’re running with the best in the country you will learn more then ever. I think he made the right call, even though I had my doubts, he knew what he was doing.”

DTD: What is it like racing against your dad Don O’Neal on the Lucas Oil Tour?

Hudson O’Neal: “It is really really special. Not many people get to experience this and race with their father. It is a blessing for sure to be able to do this at such a young age is even more incredible. I never dreamed of being able to do this and race at 17. I always kinda figured maybe by the time I get to 20 or 21 maybe something will come together and run a little bit, but not at 17. I got my car owner to thank for that and all the sponsors that really helped me to do what I love every week. They are really supportive; it’s not just me. There are a lot of people behind the scenes to make this all possible.”

Hudson O’Neal: “The Lucas Oil Tour will be a main focus this year. We are going to run a couple other races. We will run the World and The Dream (at Eldora Speedway) in my Late Model stuff. A few races here and there on a off weekend. I’m going to run some sprint car races a couple midget races and I have a 410 non winged ride worked out to run maybe 10 or so races. No said amount of races or no set dates yet. Hopefully I can hit that 100 race mark this year.”

Hudson O’Neal: “Todd Burns Sub Surface Of Indiana has been a incredible help I wouldn’t be where I am at today without him. My Dad for all the help throughout the years. He put in all he had in to it. Just to get me where I am at today. We have Dino1 coming on board as our main sponsor this year that is really exciting. We have Mark Martin Automotive, Penske Racing Shocks , Whisk Springs , Harbe Trucking , Snap On , O’Neal salvage. There are a lot of people down the road that really helped out and pitched in a ton. I know I am forgetting some but just can’t thank all of them enough.”

DTD: Where can you be found in the social media circles?

Keep your eye on Hudson O’Neal, he will be a threat on the 2018 Lucas Oil Late Model Series!!