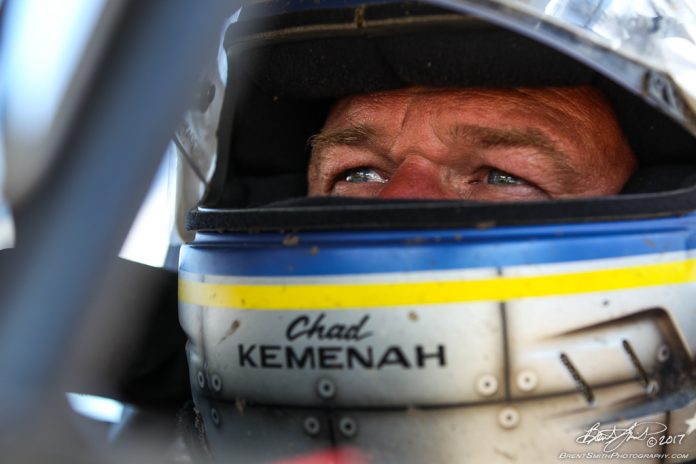 Six time and defending Arctic Cat All Stars Circuit of Champions Champion Chad Kemenah was able to capture the win last Thursday night at Bubba Raceway Park in Ocala Florida. Kemenah, from Findlay OH, started 17th and was able to get the lead race long leader Parker Price Miller on lap 22. From there he went uncontested in the final eight laps to capture his 34th career All Star win in the 30 lap affair. I caught up with Chad and talked about his win on Thursday night, his 2017 season, 2018 plans, and racing with the All Star Circuit of Champions and the World of Outlaws.

Dirt Track Digest: Congratulations on your win.  How did you get the win Thursday night?

Chad Kemenah: “We had a really good race car, was just trying to keep my nose clean, they tore up some race cars Thursday night. We were able to maneuver all over the race track. Those days are far and few between. When it comes to passing that caliber of race cars; starting that deep in the field. It just says a lot about this race team. They put a lot of effort in this thing to give me a really good race car. I was fortunate enough to pass 16 cars on the first night and get that first win of the season out of the way quickly.”

DTD: Was your car good early on in the night or did you have to do adjustments to get the car better?


CK: “We were trying to mess around; experimenting a little bit for some qualifying stuff that we have been wanting to try. We just didn’t get qualified very well. We were ok in the heat race and during the feature my brother came out on the first open red and asked ‘Do you think you are ok?’ I said, I think I’m okay we just need to let things play out a little bit. We have 30 laps and it was real early in the race; I didn’t realize I was going to be that good. To go from that deep in the field those are hard to come by.”

DTD: Shifting gears how did the 2017 season treat you?

CK: “Last year was really really good. We were really consistent. We had two years of winning championships; we were just so consistent and I want to be consistent. Last year was unbelievable. It seemed like we were always a top ten race car. Didn’t matter where we started; we would seem to finish up in the top 10. The caliber of race cars just seem to keep getting better and better. It is just so hard to do it day in and day out That just goes into the preparation at the shop. Rob and Rita (Hunter) give us everything to be competitive. It make it a little bit easier from the team standpoint when you got the tools to work with to be competitive. Just fortunate enough to be in that situation right now.”

CK: “We are going to concentrate on the All-Star’s again. I want to hit as many Outlaw (Would of Outlaw Craftsman Sprint Car Series) races as we can. When you race against these guys it just makes you sharper as a team; I’m a firm believer in that. Those guy do what they do because they are the best. When you can go race against those guy and keep your head above water I think it just makes everything better.”

DTD: How long have you been racing with the All Star Circuit of Champions?

CK: “I’ve been around the All Stars my whole life. Last year being my sixth championship. I can’t tell you exactly how many years I’ve been doing this. Eight years I went and did the Outlaw thing. Basically I’ve been with the All Stars or the Outlaws. Back when I first started I tried to race as much as I could when they came around Ohio.”

DTD: How did you like racing against the World of Outlaws?

CK: “It was a big learning experience there was a lot of good and a lot of bad. We did the majority of the Outlaw thing with our own race team. It was me , my wife (Tracy) and my father in law. It was probably a little bit more then most people can say. We did it for a least five years just by ourselves. When you do the Outlaw thing you got to have the money first of all; which we never really did. Nobody was holding a gun to our head to do it. We chose to do it. One thing good that came out of it is we started to drive for Rod and Rita. It was a good learning experience. I wouldn’t trade it for nothing. It made me better as a driver and it was a lot of work.”

DTD: If you had the opportunity would you go back to the Outlaws?

CK: “I don’t know my kids now are growing up and I missed so much of that when I was away for the eight years doing it. My daughter was two when I started doing the Outlaws; come home and she is 10 years old. The circumstances would have to be something so perfect for me to do that. Right now I’m so happy doing what I’m doing and I’m having fun again. The couple of years that I did the Outlaws I can’t say that it was fun. The day that I quit having fun I would just quit. This is a lot of fun what I have been doing; I have a really good team behind me; that makes it enjoyable.”

DTD: It sounds like you are having Fun again. Who would you like to thank for the 2017 season, your last win, and what it on tap for the 2018 season?

CK: “We have so many people that help with this thing. First and foremost, I have to take Rob and Rita Hunter for putting this thing together. Bonnell’s Rod Shop DKW Transport, JRC Transport , JLT, Champion Oil , Maxim Chassis , Keizer Wheels. So many people help put this deal together and make this team what it is. To say “Thanks” is probably not enough. Without them we can’t do it. My bother, Brian, the amount of work he puts into this thing; and the whole race team. It seems that we can compete all the time; that is probably the biggest thing.”

DTD: Do you have any social media sites where fans can follow your 2018 racing season?

Make sure you guys follow Chad in his chase to defend his Arctic Cat All Stars Circuit of Champions Championship and and his quest for a seventh.

If you have any suggestions, questions, and or comments feel free to email me at hunterhorton27@icloud.com!