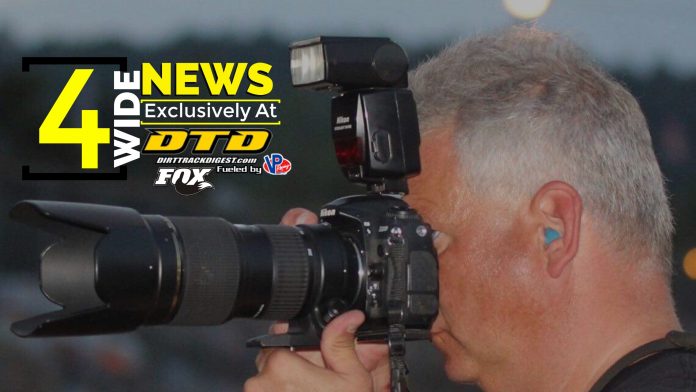 Anyone that has thumbed through a racing paper back in the 70’s – 80’s or has scrolled through an online racing site has seen some of Lee Greenawalt’s spectacular work. Lee is one of my favorite photographers on Instagram.

His post are from current races, but my favorites are from his earlier work. The older images take me back to the glory days of dirt track racing. If you live Sprint Cars Lee is the man for them.

Lee was nice enough to sit down and give us a little history into his photography career.

4Wide: What was the first racing event that you covered as a photographer?


Lee: My first Race as a photographer was in 1975. It was the TQ indoor show at Atlantic City Convention Hall (now known as Boardwalk Hall).

4Wide: What camera were you shooting this event with?

Lee: The camera that I used for the TQ race would have been a Canon F1, and I was using available light. That race started my shooting for National Speed sport News. This was also my first meeting with Chris Economaki. Chris started my Motorsports Career working for his paper. I was a credentialed Photographer, and was giving my first Press card.

Lee: I was with NSSN until 80 or so, then I worked for Gator Racing News until they closed up. I also worked for Speedway Scene during the 80’s.

4Wide: What tracks did you cover for these publications?

Lee: We traveled all over with URC until ’81. Our weekly tracks were Williams Grove, Lincoln, and started going to Eldora in 1982. Then Super DIRT Week became a regular event starting in 81.

4Wide: Among all of the races that you have covered is there one or a few that stand out to you more than others?

Lee: Well that’s like picking between your parents, that’s a hard choice, but I would have to say 1978 Reading July 4th USAC double header for sprints, and midgets. Probably because this was the first big national event that I covered , and all of the big names were there. NBC televised this race as well.  My 1986 Knoxville Nationals Tripp’s is high on my list, along with my 1988 trip to ASCOT, and the 2015 trip to the Chili Bowl. Or anytime I can go to Indiana for sprints, it is tough to pick one.

4Wide: Is there one driver that you were never able to get a shot of? And a race that you would have loved to cover but wasn’t able too?

Lee: A driver would be AJ Foyt, and a event would be Nazareth big Track, the year they ran against Super Dirt Week.

4Wide: What do you think the future will be for still photographers? And will there be a need for photographers? Is video taking over?  What are your thoughts on present day Motorsports coverage, and where is it heading in your opinion?

Lee: Wow… yes there will always be a need for still photography… video has its place… and is needed too… I feel it won’t replace still images… present day cover is great… i think the online publications need to be given the credit they deserve just like the print…I’m not sure many people are in it for the long haul, the technology of the camera is changing and the phone camera is here to stay and is a very valuable tool… many other photographers would say different, and don’t people using the phone… but I like it… I can do some amazing things with a little effort and skill… photography still comes down to one important thing and a good camera is only one part of the equation… you’ve still got to have an eye, and the passion… people still need to do the job and produce the work.

Lee Greenwalt’s work can be seen on his  Facebook page @Lee Greenawalt /https://www.facebook.com/lee.greenawalt.1