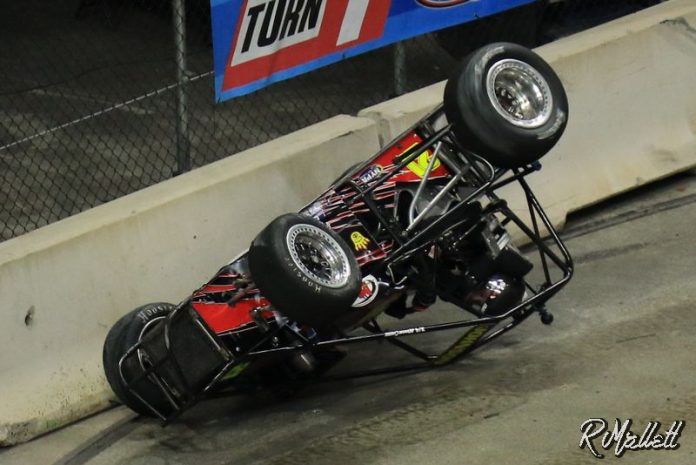 After a 16 year absence, the first indoor auto racing event in New York State was held in downtown Albany N.Y., at the newly renovated Times Union Center arena. Several dirt Modified drivers were entered in the two division show with some of them vying for a championship while others were just getting their feet wet in either a TQ or a slingshot.

Guilderland, N.Y., talent Marc Johnson was entered aboard the Shape Shifter Motorsports No. 21. Johnson, former track champion at nearby Albany-Saratoga Speedway, was making his debut in a TQ Midget. Johnson had mechanical trouble in hot laps and missed his time trial.

“The left rear bird cage bracket broke,” cited Johnson. “These things all one off so you can’t just go to parts trailer and buy one. These guys are all great around here. They had people handing them parts here and there. They did enough to get it back together.”

The car was fixed for his heat race where things proceeded to continue to go downhill. Johnson ended up on his lid at the start of the race flipping into the wall in turn one doing damage the engine on his No. 21. He returned for the consolation where he missed by one spot.


“I got caught up in the back and those guys wrecked in front of me and I had nowhere to go,” mentioned Johnson. “We cracked the valve cover. We hit the top of the valves against the wall or the floor or something and hurt the motor. We tried limping it out for the consi to get in. I don’t think everything was 100 percent. Green driver, car wasn’t right and it down from there.”

Johnson stated he’ll be back on Saturday looking to improve.

“The guys are going to get another motor to try to dial it back in,” he said. “It felt really good in practice, felt like I could catch every car that was in front of me. I think it just went down from missing the time trials and getting caught up in the back.”…

Ransomville, N.Y., Modified driver and indoor ace, Erick Rudolph was in contention for the win on the night’s A-Main for the TQ Midgets when, on lap 30, he was involved in the “big one” which ended his night. Rudolph got together with race-leader Andy Jankowiak sending them both into the wall. Coming into the event Rudolph was a mere 28 points behind current point leader Justin Bonsignore. He’ll have work to do on Saturday to make up the gap after finishing 14th.

“I don’t know what happened,” said Rudolph about the incident. “I don’t know if he came up or if I came down. We touched wheels and I had no control after that.”

Ryan Bartlett had a tough night. The North County driver ran as high as fifth in the feature but had some help going around sending him to the back of the back. He was also involved in multiple jingles to end up in the ninth position at the conclusion of the race…

Making the start in the Action Track USA Slingshot division was former Lebanon Valley 358 Modified driver Demetrios Drellos of Glens Falls, N.Y. Drellos had a tough night trying to get comfortable behind the wheel and was an early retiree in the feature.

Racing resumes again on Saturday night at 7pm with full features again for the TQ’s and the Slingshots. Tickets are available at the Times Union box office or through Ticketmaster.