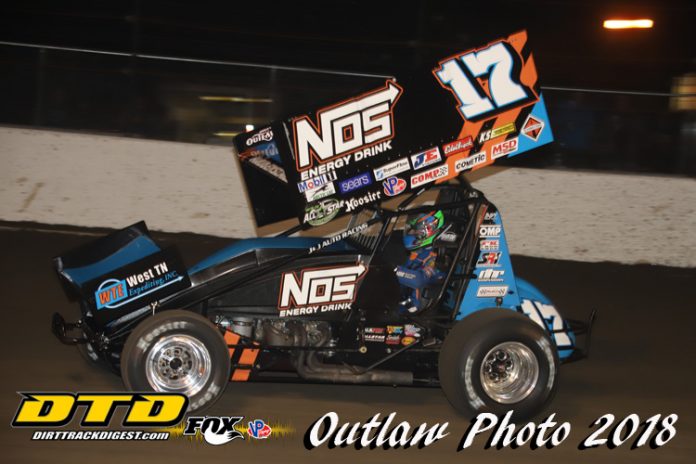 A year ago Sheldon Haudenschild was a rookie on the World of Outlaw Craftsman Sprint Tour as he had put together his own team and went on the road to eventually earn the Kevin Goebrecht Rookie of the Year crown.

On Friday night, at Volusia Speedway Park, Haudenschild took another huge step in his career in capturing his first World of Outlaw feature event.

With just a couple of laps to go in the 40th season opener for the Outlaws he raced to the inside of Paul McMahan in turn two on a restart and coasted to victory lane driving the NOS Energy Drink 17.

Afterwards he told DTD, “It takes a lot of weight off my back.“


Continuing he talked about that moment by saying, “Paul had a tire going low and I could see that I could get under him. I knew I was fast and if I got in the position I needed to be in I thought that I had the speed to get by.”

It was a tough night as the young driver noted, “Traffic was difficult out there tonight and there was a bump entering turn one where I had to be careful. I just tried to drive around that bump.”

In victory lane he said, “I hope my parents were watching tonight” and afterwards noted, “I really wish he (Jac Haudenschild) could be here for this.”

You would think that Sheldon might worry a bit about being the son of a legendary driver, but pressure wise he noted, “There is no pressure. I don’t think of it at all.”

When asked if his driving style was similar to his dad he noted, “No one drives like him. I guess he was a good teacher though.”

For Haudenschild he started the night out with the fourth quickest time, finished second to McMahan in his heat, but drew seven out of eight for his dash starting positions where he came home sixth.

He battled the likes of Ian Madsen, Cory Eliason, Rico Abreu, Logan Schuchart and Shane Stewart to get toward the front of the field as his night ended in celebration.

Sheldon Haudenschild is off to a fast start with his new team as he picked up an Arctic Cat All Star win at Bubba last weekend.

However, he said, “Mentally I thought I could win races and tonight I proved it to myself.”