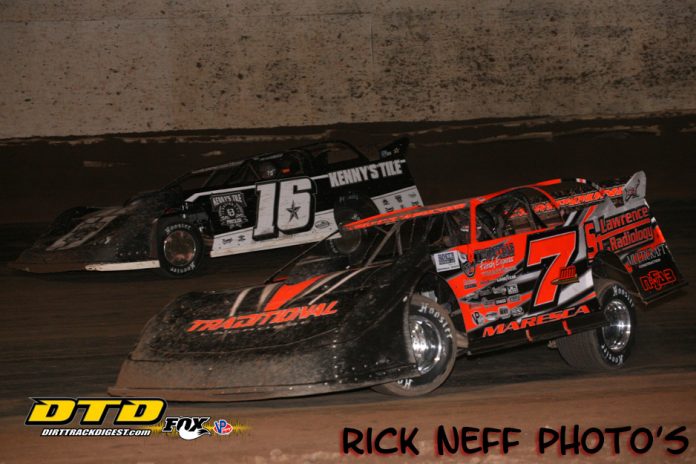 However, the Potsdam N.Y., based driver has branched out and on Thursday night found himself in a Late Model at East Bay Raceway Park in Florida.

Mike said, “I had ran some crate races in 2016 and started the in the super in November of 2017. We were planning on running with the World of Outlaws at Screven this week, but it rained out so we came down to East Bay to get some laps.”

With Screven rained out several World of Outlaws drivers joined the already highly competitive Lucas Oil roster at this Winter Nationals event as 50 cars were in the pits.


Just 26 cars were scheduled to start the main.

East Bay is slightly different and Maresca said, “The track was unlike anything I’ve seen at home. The closest thing I could think of was Five Mile Point because there was a lot of wheel spin early. From there it got to be extremely slick and the tide from the ocean changed it as well and made it very slippery.”

It was an uphill struggle all night long for the New York based team as Mike explained, “I time trialed eighth in my group which set us up with a third starting spot in heat five. We started the B Main in fifth, had a good car and we won it.”

Then is was on to the feature event where he started deep in the field and eventually finished a respectable 14th for his first time out at the Florida track.  He was the last car on the lead lap.

Maresca said, “The feature has some good moments, but I just made too many mistakes. That was kind of unacceptable to me, but the track really caught me off guard being slimy the first few laps from the tide and then it got pretty slick. I know from tire wear I can run the car a lot harder in the slick then we can up North.”

Thursday night at East Bay was a learning experience for Mike Maresca, but he hopes the lessons he learned will begin and continue to pay dividends moving forward.