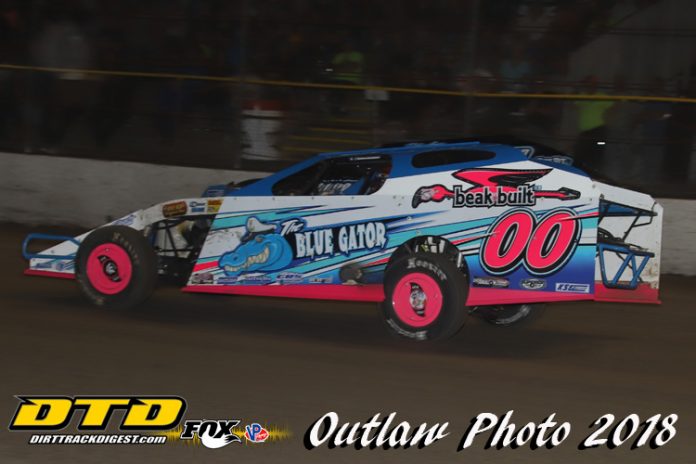 For old timers it was a time for a bit of pleasant reflection from the stands at Volusia Speedway Park.

It isn’t often that an entire grandstand rises to its feet, waving hands and cheering loudly. No, it wasn’t a WoO feature, but a UMP Modified Last Chance race. These fans knew they were witnessing a very special moment and for them it was a joy to watch.

Buzzie Reutimann, who won the first Schaeffer 100 at Syracuse, was in the house and the 76-year-old brought back many memories as he crossed the finish line first. Sure it was the last chance UMP race, but heck it was Buzzie and he was in the winner’s circle again.

And while on the topic on winner’s Donny Schatz, who saw the 250th Outlaw feature win escape him at Charlotte in November, didn’t waste any time as he finally reached that mark with a slide job on Jason Johnson with just two laps to go. It wasn’t easy as he time trialed eighth, won his heat, started fourth in the dash and made a miscue. That cost him as he finished fifth, but had fallen back to seventh in the eight car field.


He started sixth and hung there for a while and then the predictable Schatz took over.

Donny knew the crowd appreciated the run as he said, “Isn’t that what you guys come here to see and that’s why I do this.” His interesting quote was about the poor dash performance as he said, “I didn’t know what the hell I was doing.” He continued, “The guys made up for it” for the feature.

Of the race he said, “It was fast on the cushion, but I needed traffic. Jason (Johnson) was setting a torrid pace on the top and I got myself in a couple of bad spots. If he was going to zig I was going to zag and that what it all boiled down to tonight,”

David Gravel on the final lap of hot laps turned in a 13.230 for the quickest time followed by Sheldon Haudenschild (13.285), Brad Sweet, Brian Brown and Paul McMahan. The night before the two fastest Logan Schuchart and Cory Eliason were eighth and ninth.

Fast time was Shane Stewart in the Kyle Larson owned No. 2 with the only sub 13 lap of the night with a 12.959 lap. He was followed by Kerry Madsen, Brian Brown, Paul McMahan, Tim Shaffer, Logan Schuchart, Jason Johnson, Donny Schatz, Jacob Allen and David Gravel.

It continued to be all about the speed for the third prelim as pole sitter Brian Brown simply ran away from Jason Johnson.

Sensational final heat. No surprise Donny Schatz won with a slide job over Paul McMahan, but McMahan and Chad Kemenah put on a classic battle for second. Chad got by midway and with two laps to go he drifted high in turn two and Paul dove underneath and got back.

What a difference 24 hours can make in the World of Outlaws. Haudenschild had to win the B-Main from fifth and Cory Eliason, fifth on Friday, was the final qualifier as he held off Ian Madsen, who was second with thread laps to go in Friday’s main event. Jason Sides put in a heck of a run and on a restart with two laps left went from fifth to third.

Brian Brown was out before a lap was in the main event with apparent motor woes.

Parker Price-Miller brought out the yellow twice, once for a spin and the other when his right rear tire exploded.

Jason Johnson referred to the pass by Schatz as a “gut blow”.

Tim Shaffer had destroyed his car the night before and came back for third. He said, “Hats off to my guys. This is a new car and we had to change the motor over as well. That’s part of racing.”

David Gravel, who was still sore from the Friday night ride, started 18th and came home with a top five.

First night feature winner Sheldon Haudenschild came from the B Main to seventh.

“Stupid Fast” was basically the story of the night as far as the surface and the bump entering turn one just left the cars in the air for a moment and then the hope of gravity bringing them down on all four.

Wingless C.J. Leary had a tremendous amount of success with USAC, but donned a wing for the fourth time of his career.

Outlaws changed the dash format as the drivers draw for positions instead of and inversion based on time from the heat finishes. It creates a little drama.

It wasn’t a night to be orange as three cars of that hue were upside down. Entering one on lap two of the main event David Gravel apparently caught the bump in one and had handling difficulties. He started flipping and went high into the atmosphere. Tim Shaffer was collected and when it was over Gravel’s No. 5 was upside down and Shaffer was hanging on the fence. The Gravel machine remained in that position for quite some time as the fuel tank was being held in by only the fuel line.

With three laps to go in the main second place Ian Madsen bounced over the bump, he fought and fought through one and into two and every time he appeared to have it under control is simply got away. Ian eventually it the second turn wall and rolled over. He was done for the night.

Paul McMahan, with a make shift team in Florida, appeared headed for his first win since 2015, but when the red came out for Madsen with three laps to go he knew he had a problem as a tire was starting to go down. Sheldon Haudenschild got him as the bottom opened up in two with two laps left for his first win. No matter which one of them had one it would have been a popular win for the fans.

Danny Dietrich pulled off the track during his heat, loaded up and called it a weekend as he headed home to Pennsylvania.

Track was fast on Friday with Logan Schuchart, Cory Eliason and Brian Brown all under 13 seconds.

Buzzie Reutimann, who I saw win the first Schaeffer 100 at Syracuse, started on pole of the B Main on Saturday. It was an interesting front row with one of the UNOH (University of Northwest Ohio) cars driven by a college student on the pole and Buzzie, the senior age person in the entire pits, lined up on the outside.

Okay so Buzzie started 18th in the UMP main and the top ten advances to the Monday $5,000 to win championship event.

David Stremme, one of the top five in the DIRTcar Nationals points, brought out the yellow on the ninth lap to send him to the rear.

There were 77 different UMP Mods in action up until Friday night as they started racing on Tuesday and run every night until this coming Monday when $5,000 will be on the line for the Gater Championship. Twenty-one states and British Columbia were represented.

The Friday night program was unique and really something that made it worthwhile for each and every team as Quad 15’s were held and a treasured Gater trophy was presented to each winner. The first were the last 18 in points, then the next 18 followed by two 25 car fields with the finale being the top 25 in points. Victory lanes were emotional and you could tell that the trophies will be treasured.

Modifieds are starting to pull in and nearly a dozen are parked in the staging area awaiting their debut for five nights of action beginning on Tuesday.

Comments, news or anything else welcome at foley395@hotmail.com