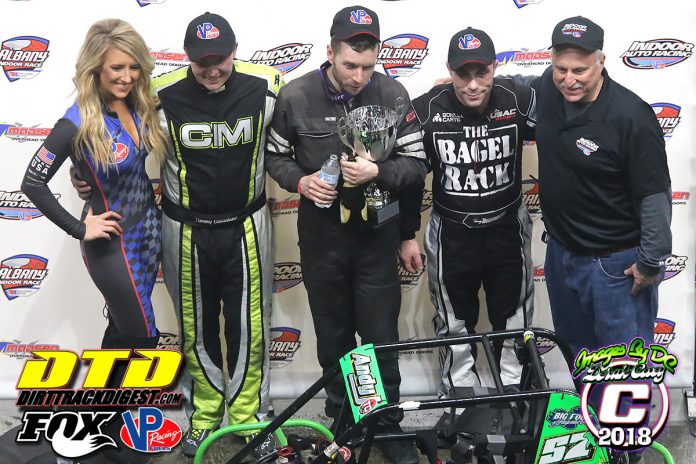 Lenny Sammons has been promoting successful indoor races for well over a decade now. He has traditional stops in Atlantic City, Trenton and last few years, Allentown. All are successful and all are on many fans and competitors calendars each year. You can call him the guru of indoor promotions.

For the 2017/2018 season, Sammons and his dedicated crew decided to take the bull by the horns if you will, add a little bit extra. He laid dirt down on Trenton and for the first time ever he hosted an event in racing rich Upstate New York at the Times Union Center in Albany.

Sammons has branched out before, there were events in Providence and Baltimore but he always had his eyes on the Empire State. “So many of the teams that run the TQ Midgets come from New York, especially the Western part of the state so you want to see if you can get them an event a little closer for the teams and their fans.” he noted.

This past weekend was the virgin effort in Albany and Lenny took some time to reflect on the event and the obstacles that he faced. What is usually the case at each event, they aren’t the throw your doors open, let them come in and count the money type deals either. Actually once you promoted an indoor event, these outdoor deals we all know so well can look like a piece of cake.


Albany started on Wednesday night, well, it was supposed to. “We came on up to get the layout set and lay the ground work for the track itself first,” Lenny went on about the first hurdle. “But in New York they have a law that all concrete barriers are to be 20 feet. With the barriers being so long we couldn’t make the corners right. We always use either 10 or 12 feet long barriers.

First obstacle was tackled and overcome…. The crew went to work laying down the fencing, caution lights and then floor mixture to make it have more grip. The key to good indoor racing. Then obstacle #2.

“There was no parking on Friday for the haulers as it’s a work day and with the arena right in the middle of downtown there’s just no space,” Lenny went on about #2, “Thanks to some local companies they opened up their parking lots a few miles away in Rensselaer so the haulers could park.

“We then set up a shuttle. So the teams would come to the arena, unload, bring the haulers to the parking lots and we shuttle them back. It took some time but went smoothly,” he went on about the only problem that caused.  “Really the only issue was if something went wrong with their car and needed specific parts they had to go back to the haulers via the shuttle. But that really didn’t come into play much.”

Once the long hours were played out, two nights of competitive racing was done. As I am sure you know, Anthony Payne won the TQ A-Main Friday and Andy Jankowiak on Saturday with Justin Bonsignore crowned overall champion.

It wasn’t a matter of minutes after the final checkered flag fell, crews went to work taking the race course apart, they had to…. “They had a Harlem Globetrotters game at 3PM the next day!” exclaimed Sammons.

“Tearing down usually isn’t too much of an issue as you know what you built a few days prior,” he went on, “We had everything gone and cleaned up by 2:30 AM. We usually do a little bit the day after but here we couldn’t as the basketball court had to be built as soon as we were done.”

With time to look back would Sammons tackle Albany again? “Yes, I think we have something to build on. We didn’t make much if anything at all but there was a real neat atmosphere. You can tell it was the first indoor event for many of the fans,” but as Lenny noted, that really isn’t up to him. “First we have to see if they even have a date for us. The Arena is just so busy every weekend.”

Even this years date wasn’t what Sammons wanted, “It was the ONLY date and it only happened cause the AHL hockey team moved out. They knew I wanted to do an event and they actually called me,” continuing, “I knew the date was going up against Florida and all the racing down there, that hurt the crowd some and also some of the competitors. Our point leader Ryan Flores couldn’t run the Albany race as he had to be at Daytona.”

Lenny who has been a big supporter in the racing game isn’t shy about answering all questions either. He heard the grumblings about ticket prices too. “It’s really hard to come up with a good ticket price when it comes to events in arenas like these. First you have to go through TicketMaster then they tack on State Tax, Amusement Tax and other fees that I don’t even see or get a kick back,” going on about pricing, “I know the fans in the area are used to prices they get a Lebanon Valley or Albany-Saratoga. If we do get an event date next year and get confirmation that the top level would be open (Which was a surprise that it was) we can do a cheaper general admission ticket for up there.”

You can tell in his voice that it takes a lot out of you doing these events, but it’s a family and friend promotion and they enjoy putting on the events. You can tell they have everything down to a science also. With the new building, new rules and policies and new obstacles, the pits were full and the races were run off like clock work finishing each night in three hours or less.

There was help from the outside as well, Lenny was quick to thank Rifenburg Construction, Madsen Overhead Doors and Gormans. He was happy with the racing on a track that turned out smaller than all other indoor events except for Baltimore, watching laps on the six seconds range was a site!

While Lenny Sammons was given so much to the sport through his Area Auto Racing News, he was very quick to thank those that help him in these endeavors.

“I have the most dedicated crew anyone can ask for. My two sons Davey and Danny work endless hours, I have about six people that don’t even see a race until the last one, they all are just amazing,” Lenny kept going proudly, “From the layout, to building the track, having unknowns thrown at you, doing the graphics, working with the TV and screens at each arena to the actually running of the races you can’t ask for a better group and most didn’t even seen the arena until Thursday! But, we really enjoy putting on the races for the fans.”