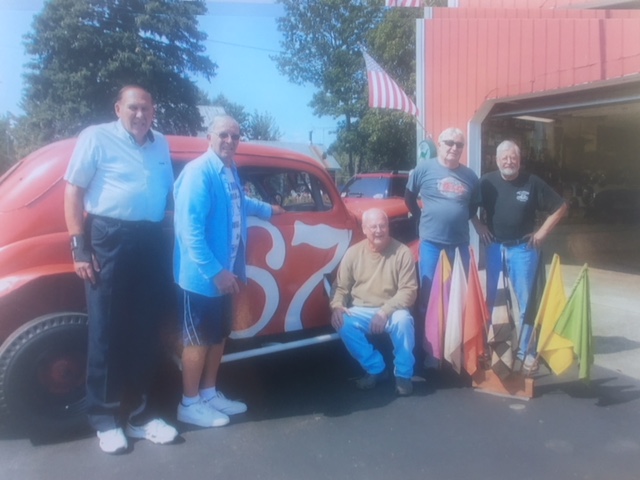 We made it to the seventh annual North Turn Legend’s Parade in Ponce Inlet, Fla., on Saturday and as it has been at past parades ran into some interesting racing legends and characters that included former drivers from all parts of the country. Those that were part of the original beach racing before it was moved to Daytona International Speedway in 1959. Daytona is the world center of racing today because of what happened on the beaches of Daytona Beach years ago.

One car that we’ve seen in the parade each year is an antique sedan with a Lebanon Valley Speedway signs advertising the 5/8 mile high banked dirt oval that we know very well. The car is owned by Paul Leinbohm of Niverville, N.Y., who spends seven month of the year in Florida. Paul raced at Lebanon Valley among other Capital Region tracks in the late fifties before he was drafted into the service. He built the car that he drives each year in the Speed Week parades in Florida and says it’s just something he really enjoys doing. Many times he escorts one of the former NASCAR drivers down the road course on A1A and onto the beach making it possible for them to re-live their glory days of racing on the beach. Riding with Paul this year was Dick Passwater originally from Indianapolis, Ind., where he raced at many local tracks. He was one of the many drivers that came to Daytona back in they day to race on the beach road course. Dick won a NASCAR Grand National race at Charlotte in 1953. He also raced six ARCA events and eleven USAC events during his racing career that spanned 1952-1965. We shot this photo of Dick as he and his son-in-law Mike Bowen got ready for the parade. While talking with Paul Leinbohm before the parade he pulled out a photo of a car that he built back in the fifties that he never got to race due to being drafted. After Paul left for the service the car became the property of Paul Visconte who raced it for a few years. After Visconte the car was also raced by Gordie Film and George Henderson. The car is now owned by Ken Gypson of Poestenkill, N.Y., who restored it and gather the former owners and drivers for the photo seen here.

While in the staging area of the parade in the North Turn Restaurant parking lot we also snapped a photo of Dr. Dick Berggren of Speedway Illustrated and Allen Brown of National Speedway Directory. Allen Brown first published his directory of race tracks in 1975. Before the internet Allen’s book was the go to publication for those who traveled to tracks throughout the country and needed the location and directions to the thousands of tracks. Brown said that during his time as publisher of the directory he had been to 2300 speedways in the United States and Canada. He as seen races at 1300 of them. He remembered being at Fonda for just one event, an All Star Race in 1968. While he was stationed at Fort Dix in New Jersey he made the trip to Upstate New York and went to events at Fonda, Lebanon Valley, and Albany-Saratoga. In 1994 Brown also published the History of America’s Speedways, Past and Present.


We are on our way to Volusia Speedway Park  this week for the Big Block Modifieds running Tuesday through Saturday. Hope to see our many friends from up north. As we close we hope this great weather continues.