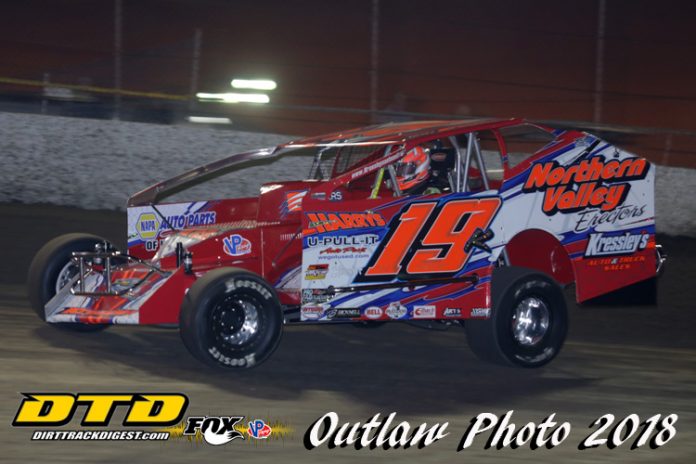 Wednesday afternoon Orefield, Pa., driver Brett Kressley stood next to his car in the Volusia Speedway Park infield and said, “I’ve never raced here. In fact I have never even seen this place before.”

Kressley, who runs Grandview, Big Diamond, Bridgeport and the some events on the Short Track Super Series, was anxious to get going with his new Bicknell.

The 25-year-old has gotten off to a decent start.

Of night one he said, “I felt very good as we missed the main by one spot.”


As the field prepared for the delayed Modified race as well as the second 30-lap of the night Kressley said, “After practice the car is not where I want it to be tonight. We are off.”

Of the Volusia lay out he explained, “It is intimidating. It’s fast and I just need to get laps on it. Hopefully I will get better by the end of the week.”

Well, he got better before the end of the week.

He finished sixth in his heat, but that got him the front row for the consolation. He drove away from the field and started 21st on the grid. By the time the night was over he sat in a solid ninth place finish as he was one of the hardest chargers of the night.  He was closing in on Ryan Watt and Billy Pauch when the checkered flag flew.

Kressley is a contender in the Northeast as he explained, “I had five wins last year and four the year before.”

The Kressley Auto Truck Sales, North Valley Erectors and Harry U Pull It No. 19k Bicknell appears to be potent.

Kressley noted, “It’s a new car with a bit of new suspension that I need to get use to. I really want to get my feet wet here and really would just like to roll it into the trailer on Saturday night the way it is now.”

Well, Brett Kressley has turned a few heads on the opening night of the Super DIRTcar Series DIRTcar Nationals and he hopes to improve upon it as the remaining two races await.