So far, Ryan Watt is enjoying his first time at the Volusia Speedway Park. The Boyertown, Pa., driver has managed a pair of top ten finishes with his worst being an 11th place effort on Friday night. He’s been able to beat a lot of drivers that have much more experience than he does on the fast half-mile.

“It’s been pretty awesome,” said Watt on Friday afternoon. “The first night getting rained out was kind of disappointing. I got all my hope up to come down here, all the hype. There is a great field of cars, get all ready to go then it rained out on us. The last two nights have been pretty good. It took a little while to get used to it, first time in this car, first time being down here. Every time out we got a little bit faster.”

Watt is behind the wheel of a Jeff Brown owned No. 9 car. It is the first time the pair has ever worked together and so far things have been going well for the new team. They shared the work in getting the car ready and it’s been on point.

“It’s been pretty good,” Watt said about the new deal. “It was right around Christmas time Jeff (Brown) sent me a text saying, ‘you interested in going to Florida?’ We didn’t have interest, we were getting ready for Motorsports, getting our stuff together. They got the car to me like two weeks before we came down here. I had a week to go through it. Those guys did most of the stuff to get it ready. Working with these guys has been great. They want to have fun and want to do good. We made the show both nights and had two top tens. We’ll try to improve tonight.”


Watt has used his experience racing on the Delaware, New Jersey and Pennsylvania tracks to help adapt to Volusia. It’s a fast, banked track where you carry a lot of speed. It’s something he is very used to.

“It’s fast,” said Watt. “Last night I was up on that cushion most of that feature. A lot of guys when the track slicks off they move down to the bottom. I was finding my way around top there and through the middle. It’s fast. It’s how I like to run. We run Bridgeport, Georgetown and Delaware, they are fast, banked tracks. This place is very similar to that.”

With solid finishes, Watt wants more. He wants one of the cherished Gators that come with winning a main-event, but he’d be happy to wrap up the week with finishes in the top ten.

“The goal is always to try and pick up a Gator,” mentioned Watt. “We got two nights to try that yet. Maybe two top fives yet and do that or two top tens. To pull out of here with four top tens would be sweet.” 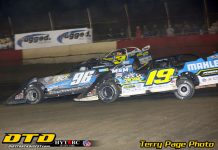