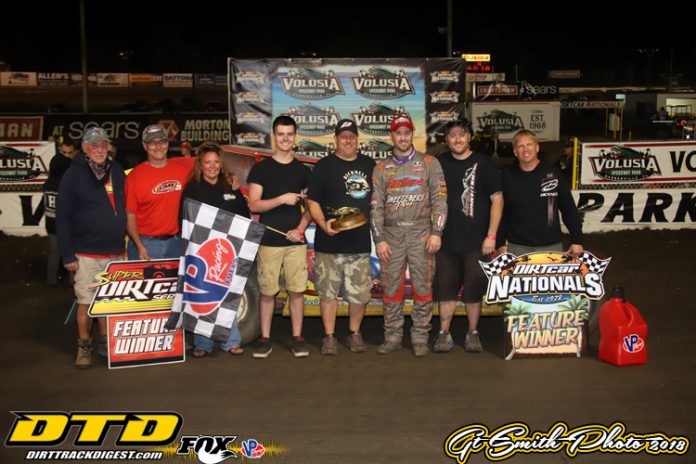 Vic Coffey has had many thrills and accomplishments behind the wheel of a big-block Modified.

However, on Saturday night in victory lane Coffey was celebrating, not as a driver, but an owner.

He had just watched his driver Tim McCreadie come from 27th to win the 50 lap $5,000 to win Super DIRTcar Series Modified finale. By the time the night was over he must have had sore cheeks from smiling so much.

The money was okay, but Vic said, “I’ve watched a lot of people come down here over the years with one thought in mind…to get a Gator.”


His team received the five foot long gold plated Gator symbolic of the DIRTcar Nationals title and Tim McCreadie did it in spectacular fashion.

This part-time team appears to have a genuine chance of winning anytime that Tim has an off night from the Lucas Oil Lat Model Series where last year he finished second in points.

Coffey said, “We hope to run 20 races with Timmy this year including the four that we ran here at Volusia.”

As they unloaded on Wednesday Coffey wasn’t sure what to expect. He noted, “This is the car we had at Oswego, but we have a new C.C. Performance motor.”

Throughout the week McCreadie did double-duty and due to that he wasn’t always able to communicate what changes were necessary so it was up to Vic and the crew.

Whatever they did seemed to work as entering the final night TMac had an 11 point lead over Danny Johnson in the race for the big Gator.

But Saturday just wasn’t going right as Tim got a spot in the main due to being the high point man.

Vic said, “The car was not good early. We made some changes that didn’t work. So we tried something with the right rear shock and undid the changed we had done earlier and it worked.”

It worked so well that Tim came from 27th in spectacular fashion to send the crowd to its feet as he passed Stewart Friesen with just four laps to go as he hugged the bottom off of four to complete the pass.

Coffey said, “That car just started to roll and it came to life. He was up on the wheel.”

Vic noted, “I thought he was going to run second, but then I saw him closing fast. I don’t know if the 44 was off the pace or we were just running that good.”