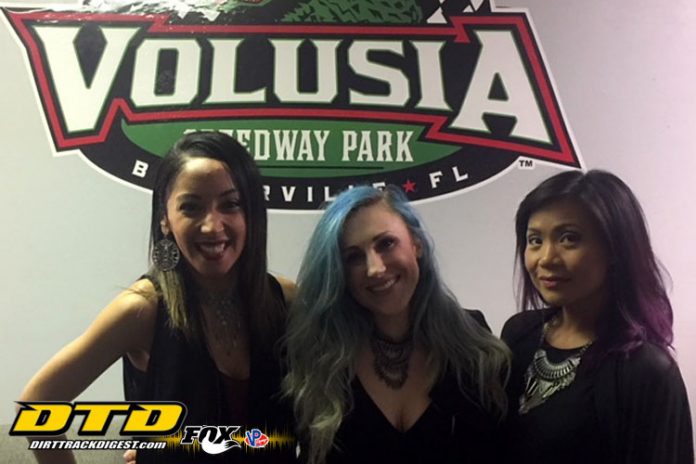 We’ve been going to the dirt track at Volusia Speedway Park during Speed Weeks for many years, o ver twenty consecutive. One of our favorite things about the trip each time is finding friends we haven’t seen for years and meeting new ones. Talking with drivers and their teams, some having new ones to start the season and some even having a new team to work with just for the Florida trip. One such team this year was that of Elmo Reckner and Kyle Sheldon. Kyle got the call one week before the Big Blocks were to be in Florida, telling him that Elmo would not be able to make the trip and asking him could he fill the seat for the five nights. Elmo’s son Chris and Kyle made plans for the trip, readied the car and came south. Although the team may not have had the runs they hoped for, they did succeed in accomplishing what they came to do; race, have fun and enjoy the good weather. J. R. Heffner, another Lebanon Valley regular, brought his whole family to Florida for some good weather, fun in the sun, and racing at Volusia. Heffner made the show each night working with his new coil car which appeared to be fine for the heats and then as the track changed for the features he sometimes struggled. In the fogged-out feature from the second night, he started 28th and finished 8th, that being his best finish for the four nights.

Max McLaughlin is still in high school and will graduate this year and we know he has been racing for a couple years at the dirt modified level. Max said this season he intends to focus on his dirt track career and also do a couple NASCAR Camping World Truck Series races. He also admitted that after racing a sprint car a few times, he would love to get a ride in a sprint. Max had two top 10 finishes at the DIRTcar Nationals. Max’s father, Mike was with him at Volusia working on the car and showing him the ropes for a career in racing. Much of our time seeing Mike race was in a dirt modified before he moved to full time asphalt racing. While at the driver’s meeting we met the newest member of the Larry Wight race team; 10 week old Audrey was attending her first DIRTcar Nationals and was enjoying a nap in her stroller while Larry and Brooke looked on proudly.


With the number of nights of racing at Volusia we got the chance to run into many from our home tracks, current and retired drivers, and fans, some that came south for the events and some that spend their winters in Florida. We talked with Wink and Karen Hinkley, John and Bodie Bellinger, Rocky Warner, Steve Hough, Drew Fallis and Danny Ballard and shot this photo. Danny recently returned to racing in a Slingshot at Glen Ridge where he said he was busy in the Fall spreading the new clay that had be delivered to the track. We saw former Utica Rome promoters, Gene and Gloria Cole who were at the track for a couple of the shows, Devil’s Bowl promoters Mike and Alayne Bruno. One morning we met current Utica Rome promoters, Bill and Kim Shea on the beach. One thing we appreciate as long time race fans is when a race track or group (WRG) takes a moment to recognize the people that support them as part of their family. During this year’s DIRTcar Nationals each night as part of the opening ceremony World Racing Group recognized, drivers accomplishments, the former promoter, Dick Murphy and a special vendor that has been at the DIRTcar Nationals for 31 years. Shirley Stella of Blairsville, PA. owns and works the unique vendor trailer in the midway specializing in “Personalized Knitted Novelties” which is also the name of her business. Shirley began selling her home embroidered wares our of the back of her husband’s pick up truck at tracks where he also owned race cars; Pennsboro and Lernersville eventually branching out to Hagerstown, Eldora and Volusia. When things got to big for the pick up, they bought a small trailer just big enough for only Shirley to stand in. As time progressed and her novelties gained popularity they purchased a larger trailer and the years kept going by. Shirley’s trailer was always one of the most popular at Volusia each year and when fans heard that it was Shirley’s final DIRTcar Nationals fans flocked to her trailer to say goodbye and buy a few of her unique items. Shirley was honored on Friday night at Volusia at the opening ceremony and was very surprised by the honor and said later, “I’m not a track champion or anything like that, so I was really surprised and honored with the recognition.” Shirley has sold out her business and as she prepares for retirement she looks forward to working outside and in the garden at her Pennsylvania home.

On the final night of the DIRTcar Nationals the national anthem was sung by a group from Orlando, Florida. Raydio Band is a Top 40 group that features the three harmonizing singers, Crystal, Devin and Lisa who sang at Volusia Speedway. When performing at upscale nightclubs in and around the Orlando area, the band includes Felix Molino, Crystal’s brother, who is the drummer, Jez Caballo on keyboards and Lelo Garcia on guitar. They were a big hit with the Volusia Speedway crowd and we found they were a great group of young performers.

As we close this effort we thank World Racing Group for another great DIRTcar Nationals. Until next time please send all news and/or comments to biittig@yahoo.com