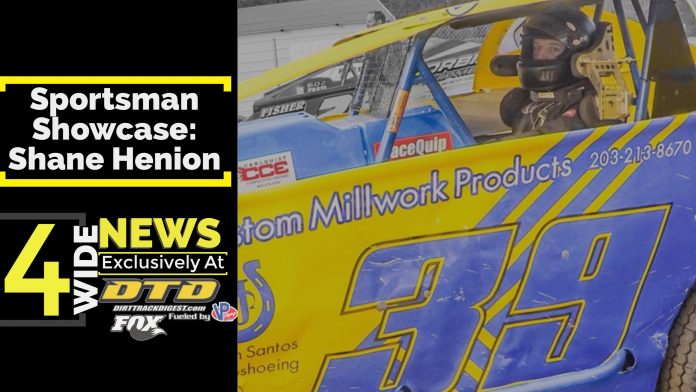 Shane Henion straps in for the inaugural 4WIDE Sportsman Showcase.  The showcase will be a place to quickly meet and get to know Sportsman drivers with varying levels of experience from across dirt racing.  Shane, racing out of Sleepin Dog Motorsports,  embodies the spirit of sportsman modified racing.. hard work, learning, and the support of family friends and crew all working together towards success.  Now we get to meet the Meriden Connecticut Firefighter, driver of the #39 Bicknell chassis and weekly racer at Accord Speedway : Shane Henion.

WHAT DID YOU LEARN FROM YOUR 2017 SEASON?

The 2017 season taught us that you cannot expect to be competitive running 2-3 times a month. Yes the Friday night weather did not help with Accord Speedways schedule (I think 10+ rain outs) but we need to make it a point to race somewhere each weekend. Having purchased Mike Sabia’s old Bicknell, I was able to hang out and travel with them to multiple shows at Lebanon Valley Speedway, Devils Bowl, Malta, Super DIRT Week 2017, as well as Eastern States. Mike’s crew is one of the best at attention to detail and preparation during the week. I would spend 2 nights a week at this shop and then come home and spend the rest of the week in my shop trying to applying what I saw. The saying “Races are won in the shop” couldn’t be more true, and perhaps that is the biggest take-away from the 2017 season.

WHAT WERE SOME HIGHLIGHTS FOR YOU IN 2017?


I will have to say our biggest highlight would be finally grabbing a top 10 on August 4th. Our team was struggling to get a handle on our car and finally were able to click off some decent laps and stay out of trouble. The racing at Accord in the sportsman class has always been extremely competitive, and that was not an exception this year. Our second biggest highlight would probably have to be The Gobbler. After getting wrecked the first lap of the heat we managed to drive back to fourth with a broken left front shock and miss qualifying by 1. The LCQ race went the same, started 3rd and got spun going into turn one. Drove from dead last back to fourth and looped it dive bombing for the last transfer spot going into the last corner.

For 2018 we will need to focus on preparing the car better during the week, and properly adjusting and recording adjustments on race day. If we cannot prepare the car properly each week then there isn’t a point to even show up to the track. You’re not going to be competitive and I do not want to show up just to take laps. Another thing we will need to work on is getting as much seat time as possible.

For 2018, I plan on running Accord Speedway weekly on Friday nights again. Our goal is to compete for points weekly and hopefully bring home a top 5 in points. A realistic goal is top 5 in points, our hope is to be battling for a championship. In the first month of racing in 2018 we are going to be broadening our horizons by trying a couple races at Lebanon Valley Speedway and Malta. We are also throwing out the possibilities of following a touring series, that will not be decided until early in the year once we start getting our sponsors lined up.

There are a couple different reasons I chose the 39 as my race number. I was always an Earnhardt fan growing up, but I did not want to run the 3 because I felt it would be disrespectful. I ran the 29 all throughout Go-Karts, and was 33 in football throughout high school and decided to combine the 2, out came 39. The added bonus to choosing that number was one of my favorite New York State modified drivers ran and still runs that number, the one and only T Mac!

WHO WAS YOUR FAVORITE DRIVER BEFORE YOU STARTED RACING?

NASCAR wise was Earnhardt, SR, hands down. Local short track racing I would have to say Andy Bachetti. The tenacity he brings out onto the track with him is unbelievable. It’s 100% every lap. Andy pushes the envelope every lap to get to the front, if I can bring 1/2 of that I will be in good shape.

WHAT IS YOUR PROUDEST RACING MOMENT?

Probably my first top ten in 2015. I was running a used up 2004 Bicknell with used up equipment just trying to get seat time. The team showed up with a rented trailer, 1 spare, and a small tool box. I had two races under my belt and just drove my tail off. I was proud at the fact we had the smallest budget imaginable and no experience and were able to finish in the top 10

WHAT IS YOUR MOST EMBARRASSING RACING MOMENT?

My most embarrassing racing moment didn’t even come in a car. I was running Karts at 15 and tried hot-shotting it onto the track for the feature. I looped it on the backstretch and stalled facing the hill where everyone watched. Sitting there watching everyone chuckle was the most embarrassing moment of racing to this day.

WHAT IS THE ONE RACE YOU WOULD LIKE TO WIN?

Mr. DIRT Track USA. I grew up going to Lebanon Valley Speedway and grew up watching this race and the names surrounded by it. Syracuse would have been up there but Greed and Crooked Politics took that from us.

WHAT IS A DREAM TRACK FOR YOU TO RACE AT?

I want to run Eldora. I went to the inaugural truck race out there and then again last year for the return of the Super DIRT(car) Series and decided that it was going to be put on the top of the racing bucket list.