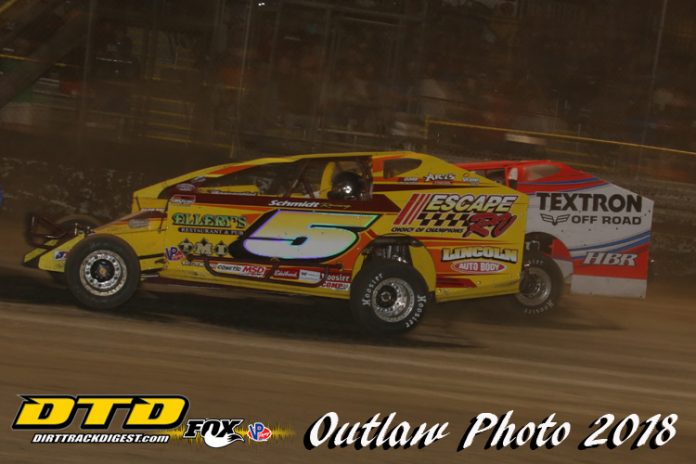 When Ryan Godown arrived at Volusia Park Speedway last week, it was the first time the Ringoes, NJ driver had ever seen the Central Florida Speedway let alone pilot his big-block Modified around it. After teaming up last year with long-time Modified Owner Dieter Schmidt to drive the well-known Lincoln Auto Body No. 5 it was a good bet that Godown would be heading to Florida to compete in the 2018 DIRTCar Nationals. Schmidt has always like to head south in February to race his Modified and this year was no different with Godown behind the wheel.

To complicate matters even worse for Godown was the fact that he would be competing there for the first time in a new model Troyer TD4 chassis that he had never driven before. Although Godown has driven Troyer cars successfully for most of his career they had gone away from them last year, but with the success Peter Britten had towards the end of last year with the new Troyer TD4 chassis Godown thought this would be a good time to switch back and help put Troyer back on the map here in the NJ/PA area.

The team was excited to get on the track on Tuesday for the first day, but rain put a damper on the days efforts and Tuesday nights races were cancelled.

Wednesday found the weather better but very humid and the LAB No. 5 was ready to go when warm-ups were called to the track. Usually at the DIRTcar Nationals they will give the big-block Modifeds a night of warm-ups the night before the races are scheduled to start but this year instead of doing that they added a fifth night of competition for the boys up north. So, on Wednesday night when Godown hit the track for warm-ups it was the first time the #5 car had ever hit the track.


Godown timed sixth fastest in his group on Wednesday night which lined him up to start sixth in his heat race in which he held is own and finished is the same position which was one spot out of a qualified spot. Godown started second in the consi and won it to line him up in the 22nd starting spot in the feature. Unfortunately, the fog rolled in during the running of the late model feature forcing the track to cancel the Modifieds until the following day when they would run Wednesday makeup event along with the regular Thursday night show.

Wednesday’s nights fogged out feature was first up for the night after group time trails were run for the Thursday nights races. Godown again timed sixth fastest in his group lining him to start sixth in his heat race but before that it was feature time from Wednesday night. Godown ran steady in the first race with their new car and by features end had worked himself up to finish 11th.

“I thought we were really good the first night and we were able to work ourselves up to the top ten and then the car got really tight, but the biggest problem was that I ran out of tear-offs and couldn’t see anything.  Once that happened I just tried to run the middle. I think the car had an extra 60 lbs of mud on the rear deck lid after the race.”

Now it was time to turn the car around get ready for Thursday’s race. Godown once again missed out qualifying in his heat race by one spot finishing sixth forcing him to have to run the consi once again. Just like the night before, Godown went out and won his consi which would line him up once again in the 22nd starting spot for the main-event. Godown had a rough time during the 30-lap feature and was only able to manage a 15th place finish.

“In the regular Thursday night feature, I just didn’t make the right adjustments we needed to make after the first race and that comes from not being familiar with this new Troyer TD4 chassis. If I was running my old TD1 car I would’ve known what changes to make going forward. I was at a disadvantage right from the start not having run here before and then they only give you four laps of practice the first night so it’s really tough to get an idea of what do to. With a new design chassis, I’ve never driven before along with the new Morgantini motor we really quite sure how it was all going to mesh together so overall after Thursday night I thought we did okay and had some stuff to work with going into Friday and Saturday. I thought the track conditions were a little slimy so that was a battle as well.”

Friday night proved to be a turning point for Godown and the team. After a couple nights of getting to know the car and how it reacts to changes the team went out and set fast time overall for the big-block Modifieds putting Godown on the pole for his heat race. The heat race didn’t quite go as planned as Matt Sheppard was able to get by Godown at the start to set the pace and after a hard fought and sometimes physical battle with Larry Wight, Godown had to settle for a third-place finish just missing out on a chance to make it into the redraw for the first time this week. Lining up in the tenth spot for the feature Godown ran a smart and steady race to finish in the sixth spot for his highest finish of the week so far.

“We were able to get some notes together after the first two nights and we were able to make some adjustments going into Friday night’s show and it really paid off for us, we timed fastest overall for the night but then I made a mistake in the heat race and tightened up the car too much and we ended up third, but I knew we were going to have a good car for the feature. When the feature started I was able get up to sixth in the first few laps and I am telling you we had a top five car, but the trace started to take rubber, and everyone just had to get in line hold their spot. Before the track took rubber, the car was really good and slick in the black. But even with the track rubbering up I knew we were on the right track with the adjustments we made so that made us all feel good.”

Saturday’s night 50-lap finale proved to be Godown’s best night of the week. The night started out with Godown timing sixth in his group lining him to start sixth in his heat race. Godown knew he had a good car under him was able to finish third in his heat just missing getting to the redraw once again. Feature event time found Godown starting the finale in the 11th spot and once the green flag dropped Godown was able to move up into the top ten quickly and started looking for more. Godown worked through the top ten and when starter Dave Farney threw the checkered flag Godown had his first top five finish of the series finishing in the fifth spot.

“I was very excited going into Saturday but during time trials I missed my mark on both laps so that put us behind a little bit for our heat race. The car ran really good in the heat race and we were able to go from sixth to third and it felt really good. In the feature the car was a rocket and we were able get up to seventh I think and then we got stuck on the inside on a couple restarts and guys in front of me had a hard time getting going and we lost some spots and at one time I think we were back to around 15th. Once everything settled out we were able to drive back up to finish fifth. I thought we were faster than Billy (Pauch) and (Mike) Mahaney there at the end and I think we had a great shot at a podium finish but the fast way around the track was up top on the cushion so that’s where everyone running at making it hard to pass.”

It was a successful first run for Godown at Volusia finishing the week eigth in overall points with four top 15’s, two top tens’ and a top five on the last night. With a newly designed chassis, new car, new motor and a track the driver has never run before I think you could say Godown was pretty happy with how it went. But as happy as he was with the end result, Ryan was even more ecstatic over how well all of his teams worked together to make this effort a daunting success and help set the tone for the busy season ahead.

“I am very much looking forward to the season ahead of us, the new Troyer TD4 car is very promising and I think we have something there. But the best part of the week was how everyone came together to make this deal work. We had Billy Colton there from Troyer helping us out all week and he was a big help, obviously Dieter was there helping us out with his suggestions. Steve Searock was there giving us a hand so he could learn how these new Troyer TD4’s work and I was on the phone with Jared (Petruska) everyday from New Jersey who was giving us his input to make the car better and that is what I am really happy with going forward.  To have all three teams working together as one means a lot to me and I am really happy to have all of these guys behind me. It really gives me a lot of confidence going into the season. I really need to thank Escape RV, Ellery’s Restaurant and Pub along with TMI Trucking and especially Dieter Schmidt for giving me the opportunity to run Volusia last week. It was a lot of work, but it paid off with some good finishes. It made the plane ride home a pretty happy one.”