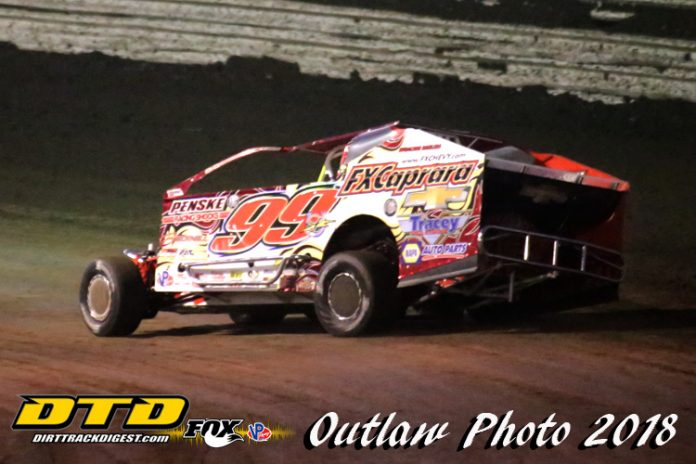 Back in the 60’s the legendary Bob Dylan sang “Times They are a Changin’”, but that is still quite appropriate today.

One of those living in “Changin’ Times” is big-block Modified driver Larry Wight.

Many folks remember him as a mid-teen letting his Modified fly around the race track with reckless abandonment. There was nothing wrong with that as it was the impatience of youth.

However, sitting on his four-wheeler in the Volusia pits during the recent DIRTcar Nationals there he relaxed gazing longingly and lovingly at his 10-week-old daughter Audry who was relaxing on his lap.


He was in the Sunshine State to race, but this wasn’t the Larry Wight of eight or nine years ago.

In years past if there was a Modified race Wight was there.

However, that will not be the case this year as Larry explained, “I’ll be racing at Fulton and Brewerton and at Fulton we plan on having the new 358 motors we are building and I will spend time doing RD (research and development). We will run some big shows and local big shows”.

Continuing he explained, “We are not following the Super DIRT(car) Series as I can’t do midweek shows and work.”

It was common last year that he would be on the road, several hours from his home base in Phoenix, N.Y., and he would depart from the track and arrive home from a tour show at 3 a.m. or so. Less than two hours later he would be at his business starting the workday. He noted that he can’t continue to do that.

He also noted that Modifieds (big-block and 358) won’t be his own stomping grounds.

Larry said, “I plan on 15 to 20 Sprint Car races this year with ESS and would like to run some 410 races with the World of Outlaws, All Stars and USAC when there are no conflicts.

Continuing, it was easy to see, that his wife Brooke and their new daughter have made him a family man.

However, he also has something very close to him as he said, “I have my own trucking business we started last year. We’ve doubled the fleet to 50 trucks. It is just too much to race during the week.”

The Florida trek wasn’t kind to him, but typical high riding runs were common and on the final night when he was moving up he got caught up behind a car that had broken down, hit the first turn wall and nearly flipped. His week was over.

Earlier in the week he put on a crowd attention drawing charge and he said, “I blew out a master cylinder in the rear brakes and finished the race without brakes.”

At one point there were four cars, Wight joined by Matt Sheppard, Brett Hearn and Ryan Watt side-by-side coming off turn two. Larry said, “I just hoped everyone knew we were four-wide and that there was enough room. I was happy with the car as it was a good test.

Of the ride he brought to Florida he said, “It was our Bicknell from last year and we have retro fit it with some Bicknell stuff. We are starting with coils and will make it work.”

While some drivers like Sheppard and Stewart Friesen still race for a living, such is not the desire of Wight. Larry said, “Brewerton and Utica-Rome were really a hotbed for good racers with drivers like Sheppard and Friesen. We’ve had success over the years and for 10 years we’ve been able to keep up with them. They are always top five drivers. I just hope to be around them and race with them.”

Well, times are a changin’ for Larry Wight and his fans won’t have to take lengthy road trips, spend money for tickets at the higher priced road shows as he will be staying close to home with rare exceptions.

But Fulton and Brewerton fans will see him regularly.

Wight is focused on his family and business and has said more than once, “I am racing to have fun.”

He plans on working hard and hoping that racing can remain “fun” during the 2018 season.