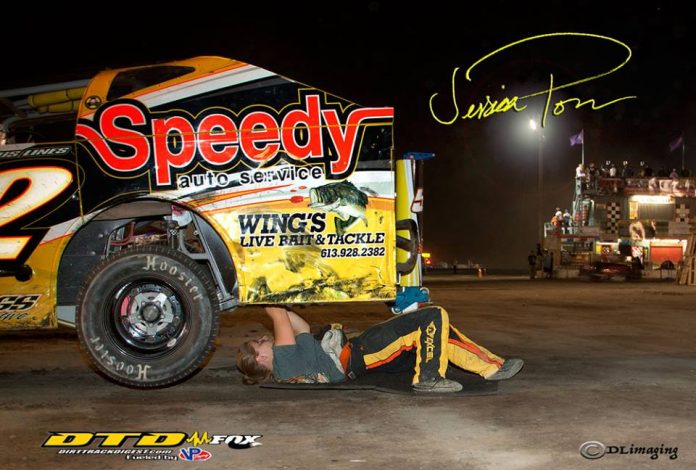 Since I last wrote an article on Jessica Power nine years ago, the native of Kingston, Ontario, had just graduated from Queen’s University with honors and was also pursuing a career in racing at her home track of Brockville Speedway. Life was good, but Jessica was not known for just siting ideal going with the flow, she wanted more out of racing.

Over these last nine years, Jessica has learned every facet about a race car and what it takes to race in the Sportsman Modified class. She has relentlessly achieved more out of racing with a limited budget than most would ever consider, and has had some great success over the years.

This story all started back in 2003 when a close friend of Jessica’s introduced her to racing at the Brighton Speedway. She was so intrigued with the sport that, within days, she approached her father, Chris, and voiced her desire to racing. They then convinced Jessica’s mother, Cheryl, that this was important to Jessica. So with her mother’s blessing, they went out and bought a car over the winter to compete in the four-cycled class.

The first few years were dedicated to learn the sport and sharpening her driving skills. With her dad tuning the motor, Jess helping with car set-up and mom compiling stats, the team was well on its way.


By 2007, the 52 Team was a dominating the four-cylinder class at the Brockville Speedway, taking home the championship that year. With the successes throughout the 2007 season, Jessica decided to move up into the Sportsman Modified class, something she had wanted to do for some time.

2008 was planed as more or less a transition year for learning what it takes to be competitive in the Sportsman Modified class and that this would prepare her for the following years to come.

Things started out on a positive note for the then 22-year-old in 2009. The team was making progress with their racing program over the previous year. Jessica’s boyfriend, Shawn Hartin, joined the team, bringing with him a lot of racing experience; Shawn had crewed on the race team of Danny O’Brian for many years. Another addition to the team was Jason Jones as their tire man. Unfortunately, early on in the season, Jessica had a terrible crash at the Brockville Speedway. She sustained a broken shoulder along with rib injures which sidelined the young driver for most of the season. But within  one year, she would bounce back and picked up her first win in the Sportsman Modified class, redeeming her quest for racing. For the next few years Jessica continued to improve along the with the teams race program. The dedicated effort and stretching every financial resource would provide no less than 5 top 10 finish in the DirtCar North East points standings, one of which was a fifth place finish. These results were quite an achievement for this small close-knit team from Kingston, Ontario. She would also challenge for the several track championships over those years coming fourth at the Can Am Speedway in 2011, third at the Brockville Speedway in 2012, fourth place at Mohawk Speedway in 2013 and fifth at Brockville in 2014.

The 2015 season was definitely the breakthrough year, demonstrating that their race program was finally paying off. Along with her fifth-place finish in the DirtCar Northeast Standings that season, Jessica challenged hard for the three- track championships, the closest of which was at the Can Am Speedway where she came in just one point shy of a championship. Jessica would finish third in points at the Brockville Speedway along with a fourth-place finish at Cornwall Speedway. It was a banner year for Team 52; however, Jessica still wanted more.

To challenge her racing skills further, the team decided to compete at the high banks of the Fulton Speedway, making this their home track in 2016. They also included an extra crewman — Jamie Ruttan.

Unfortunately, illness in the family would play a major factor in the racing program throughout 2016 and most of the 2017 season. The team persevered through and in 2016 she would finish fifth in points at the Cornwall Speedway and toke an eighth-place finish in the DirtCar Northeast Standings. Jessica expressed that it was difficult to concentrate at the task at hand while this situation was unfolding at home.

For 2017, the team added Weedsport Speedway to the schedule, with Fulton once again being their home track. By adding Weedsport, this allowed them to compete against a stellar field of competitors on a larger 3/8-mile track, similar to the track at the Oswego Speedway, which is converted each year to a 3/8-dirt oval for Super Dirt Week. The Weedsport experience would help with their long-term goal, obtaining that allusive win at Super Dirt Week. They toped the season off with a third-place finish in the DirtCar Standing for the Western Division, and a seventh-place in DirtCar Standings in the Central Division.

Jessica and the team are still contemplating their 2018 season and schedule, but whatever they decide, I am sure they will have great success as they move forward.