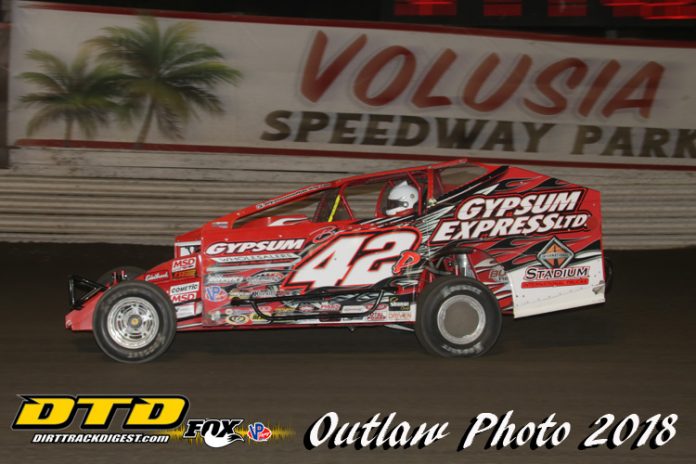 Pat Ward simply loves to race.  For the past couple of years he has returned to Florida to compete in the Super DIRTcar Series DIRTcar Nationals.

As he unloaded on the first night the sprinkles began to fall and it appeared that the show might be lost. After the drizzle continued the announcement came that the show was cancelled.

Matter-of-factly Ward said, “Well we would have had to work the track in for quite a while so that’s okay. We’ll race tomorrow.”

And the next day came and for the next four nights the Mods were on the Volusia surface.


Ward came prepared for this year’s edition as he noted, “We’re using the same car as last year, but I do have a brand new car in the hauler which we could run if we have too.”

“The Genoa Giant” fared quite well on the first three nights and sat in third place in points, but on the last night the top three point getters all ended up starting deeper in the pack than they desired. Pat finished fifth on the first night and followed with 7th, 11th and 13th.

Of Volusia he said, “I always seem to run good here, but just not good enough. This is a fast, hammer down, up on the wheel track. It is a young mans track. It used to be slow and slippery, but it’s hammer down here know.”

Looking ahead to the 2018 season, Pat talked about his plans, as he said, “I’ll be running Brewerton and Fulton and I think also Utica-Rome. I won’t be running the tour this year as we are racing closer to home.”

There is no doubt that the 42p will hit some of the nearby Super DIRTcar Series events, but will not be making those long haul midweek shows.

Well, the season is here and Pat Ward continues to ply his trade around the Central New York speedways.

Pat is one of those guys who just never appears involved in any type of on track controversy, but even if he was he has a unique attitude. He said, “I don’t read anything on the internet. I just race, work on the car and go to the next race.”

With a smile on his face, no matter what happens to him, he will continue to be a fan favorite.