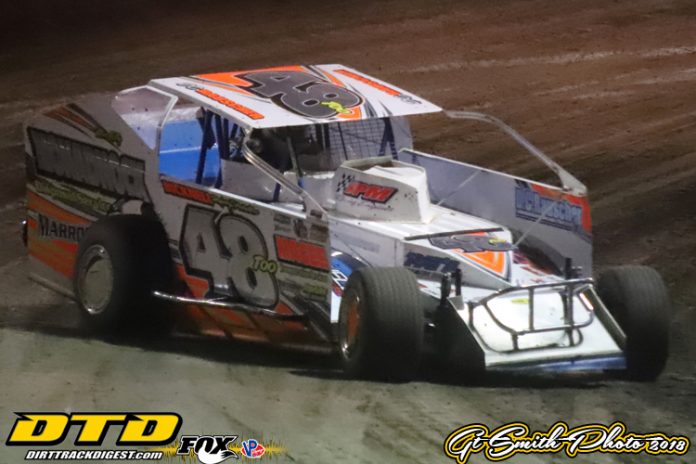 “The Big Show”, Dave Rauscher, was at DIRTcars big show at Volusia Speedway Park and he was one of those guys who came “oh so close”.

Rauscher made the trek to the Sunshine State with a new car. He said, “We got our asses here and then my ass wouldn’t fit in the car. We had to make a few adjustments. I just purchased this car which had been built for Gary Tomkins. We made those adjustments and it purred like a kitten.”

He decided to get a new ride as he explained, “I am chasing those damn kids every night.”

At Volusia he got into one main event, but was close on the others.


Of time trials he said, “I would suck in them. I found myself going in too hard at times and I wanted to miss the bump in turn one. I would just have to fight it to qualify.”

He would fare well early in heats and consis, but noted, “You make one mistake and it comes back to bit you or that one night I was in a qualifying spot and the same guy brings out the yellow. As we went a little longer I feel I got smoother. “

One of the best races of the week was a last chance event which saw Tyler Siri and Rauscher battle throughout. It was sensational. He said, “It was the most fun I’ve had in a long time. I felt comfortable in the car down here and it has been going pretty good. I made some mistakes and that hurt us.”

Dave Rauscher got a late start in racing. He explained, “I helped Matt Sheppard and Robbie Bellinger years ago, but when the kids were old enough I found myself bored to death. I didn’t want to get fat and lazy sitting in an easy chair. “

“The Big Show” went racing, but even before he could hit the track he had a problem. Dave explained his unique 48Too number as he said, “My dad’s number was 48 and I wanted to race his number, but Darryl Ruggles had the 48 and they told me I would have to think of something else. I thought about 48 Also, but settled on 48 Too.”

He stressed he’s racing strictly for fun and “doesn’t want to get in anyone’s way out there.”

His Pipeline Construction and Oil Service Trucking Company, with shops in New York and Pennsylvania, keeps him busy.

Looking ahead to the remainder of 2018 Rauscher said, “I’ll be running Black Rock (Outlaw Speedway) and Canandaigua (Land of Legends Raceway). I might attempt to follow the Series. I was thinking of asking Matt (Sheppard) if he would like to have me drag their second car to the Series shows. If it works for him that would be fine.”

So with a smile on his face and always a joke or two in the back of his mind, Dave Rauscher will hit the Northeast tracks starting in April.

At times he looked very competitive at Volusia. That is until the yellows came out.

He hopes to keep the 48 Too moving in the right direction and is looking forward to another enjoyable season so he “won’t get fat and lazy”.