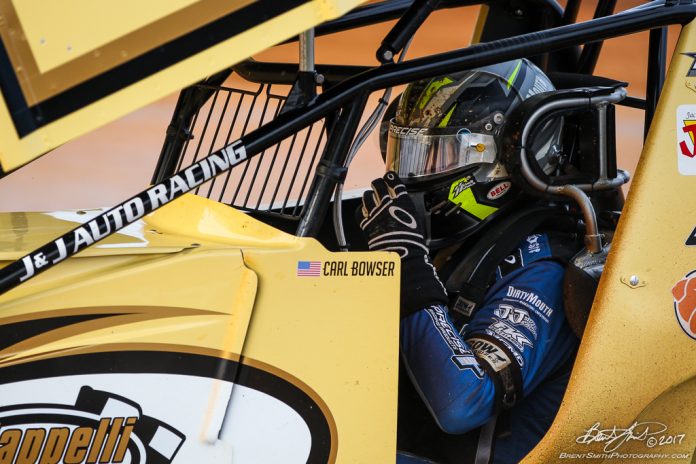 Carl Bowser has been a mainstay in the Western Pennsylvania Sprint Car scene for nearly a decade.  The Butler, Pa., driver was a Rookie of the Year at the Lernerville Speedway before becoming a multi-time champion at the facility.  That success eventually helped land him a ride in the Tom and Fran Chiappelli No. 98.

That opportunity allowed the 31-year-old driver to get out his comfort zone.  He was able to travel more than before, including trips to the Port Royal Speedway, allowing him the chance to compete against some of the best 410 drivers in country.  Now he and the team are ready for their next challenge.  They’ve elected to hit the road to compete with the All-Star Circuit of Champions for the 2018 season.  It’s something Bowser has always wanted to do.

“Honestly, it’s a dream come true,” said Bowser.  “I can remember being a crew guy on a 410 car are Lernerville (Speedway) and thinking about wanting to run a 410 car and thinking about then.  If I could just go out and run a full tour, whether it’s the (World of) Outlaw tour or All-Stars, whatever it would be.  I can remember being 16 and thinking that and never sitting in a race car.  It means a lot.  It really means a lot that Tom and Fran have that much trust, that much faith in us.  We have all the equipment at our house.  They always took care of everything for themselves.  They always had a driver that just showed up to the race track.  So that means a lot that they are in this and to know, even last year, when we went somewhere and got our teeth kicked in that Tom was right there to tell me, ‘you got good stuff but it’s going to take time.’ That really means a lot.”

Bowser continued by giving a lot of credit to his wife, Kristin, as well for pushing him to take more chances and get out on the road.  That extra push has helped get him to this point in his career.


The decision to go full-time on the road was one that started to take shape during the 2017 season.  The team met mid-year and the choice was made.  This helped shape the second half of 2017 in order to prepare for a rigorous 2018 schedule.  They did everything they could to get ready for this year’s full assault on the All-Stars.

“The end of June I think it was, we had a meeting planned to sit down and talk about the year, talk about what the season held and to talk about the 2018 season,” stated Bowser.  “Basically, when we got done with that meeting, they (Chiappelli) felt that the All-Stars was the next step and that’s what my wife and I felt.  The All-Stars were the next stepping stone for us.  From that point, when we decided we were going to be full-time All-Star members, we kind of started looking at the schedule to work on our car package, working on our engine package to get all of that prepped for this season.  We started picking and choosing our races so we were getting to some different tracks and some of the tracks, like Port Royal, that’s bigger where we could work on our program.  So from June last year that is what we worked on.  We knew that this season was going to be a lot.”

As a result of the decision, this off-season has been much different for Bowser as he prepares for the year.  Unlike in the past, there wasn’t much selling off of equipment, but rather the stockpiling began so they have enough inventory to take them through the grueling schedule.

“The number of races looks like a lot and I don’t think I’ve fully gotten my head around that yet,” said Bowser.  “The holy crap moment has been just getting parts ready and not knowing.  I know this going to be, hopefully our first shot at the All-Star deal and not our only shot, but I don’t want to be a team that we get into a situation where come to the week after Speedweek and we are out equipment or we have to miss a race because we don’t have something.  We’ve been trying to prepare, get as much as we can ready.  Usually at the end of year we have a trailer full of parts we take to the flea market to sell and then we buy new.  Now we are buying all new stuff and I haven’t sold off stuff from last year so if we need it, we have it.  That’s been the unknown because we are all new to this.”

The most exciting aspect of the new venture for Bowser is that he’ll have the chance to get to several facilities that he’s never been to before. It gets him out of the weekly grind and makes nearly every day a different challenge.

“Getting to a bunch of different tracks,” he said when asked about the best aspect of this change.  “I feel like me, as a driver, I excel at tracks when I get there for the first time.  I kind of get in a rut when I run the same tracks every week.  You get better, you get the car better, but me driving, I don’t think you get any better.  That is the exciting thing, getting to get to a bunch of new tracks.  I know it’s going to be tough, but I feel like I can look at a track and get us somewhere, hopefully close, fairly quick.”

As part of the preparation for those new venues, the team made sure to take plenty of notes in order to have baseline setup they can put in his HP Engines powered J &J Auto Racing Chassis.  He feels they have a good setup for tracks big and small that they can work with as the season progresses.

“We as a team, for a long time, have kept really good notes,” mentioned Bowser.  “From June on last year we worked on two kinds of baseline setups.  We have a basic setup we go to for big tracks and one we go to for smaller tracks.  We just tweak from there.  We know that base setup might not be the best, but it’s going to get us close and if nothing else, I know what the car is going to do in the first corner and we can adjust from there.”

One of the new venues he’ll be get to compete at is the Knoxville Raceway, the Sprint Car Capital of the World.  It will be his first experience racing at the half-mile facility known for the Knoxville Nationals.  He went once before as a crew member for Ralph Spithaler.  This year will be the first chance he’ll have to race at the track.

“We are going there first for the All-Star weekend,” stated Bowser.  “They did a great job getting us there.  We have three races that weekend and the Saturday night show is at Knoxville.  That is two weekends before the 410 Nationals.  We are going to go out there and run that.  I’m very excited about that.  It is something I’ve wanted to do since I was there in 2002 as a crew guy.  A local guy from here in Western Pa., went out there and ever since then I’ve wanted to go back.  We are excited.”

When asked about expectations, Bowser didn’t want to put a number on how many wins, top five or top 10 finishes the team wanted to accomplish.  He just hopes to have a solid campaign with a team goal of ending up in the top five in points at seasons’ end.  They ran near the front on several occasions with the All-Stars and they hope to improve those finishes.

Bowser made sure to thank all the sponsors that will help him live out his dream including: Golden Flavor Sesame Sticks, Turner’s Premium Iced Tea, Dirty Mouth Communications, Ringer’s Pet Dog Training, Reesman’s Body Shop and Precise Racing Products.

Bowser and company will make their season debut prior to the start of the All-Star schedule with events planned for Central Pennsylvania and in Ohio.  His first All-Star Circuit of Champions campaign officially kicks off on April 6 at Atomic Speedway.