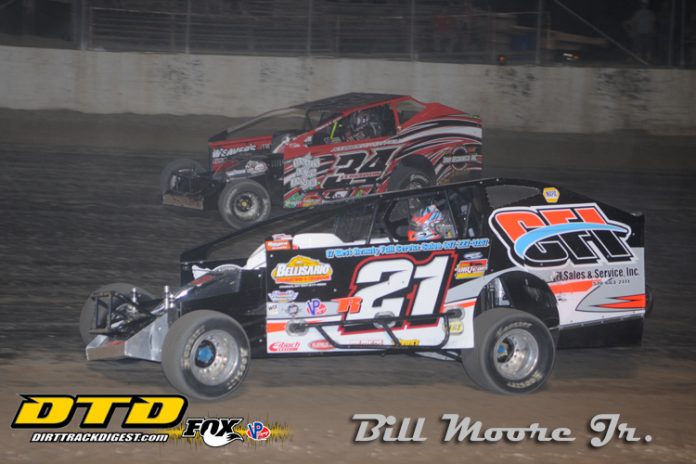 A year ago Southern Tier regular Ryan Jordan found himself a new Saturday night home at the Fulton Speedway.

He said, “I just want to get better. I want to learn and improve.”

During the 13 race season he finished in the top five twice and had four top ten finishes to end up 14th in points.

Coming from a small-block background he knew it would be a challenge and test.


During the early part of the season he noted, “I just don’t want to make anyone mad at me,” and his goal was a top five finish which he would consider a “tremendous achievement.”

He accomplished what he set out to do.  An as a result, 2018 will be interesting.

In an exclusive from Dirt Track Digest, Ryan said, “We’re going to race our tails off!”

He will be branching out and noted, “We’re going to have a dirt legal 358, an open small-block and a big-block.”

Fans will get to see him regularly in racing action.

“On Friday we’re going to bounce back and forth between Outlaw Speedway and Brewerton,” explained Jordan.

However, there is more as he said, “We were originally planning on attending every race on the STSS (Short Track Super Series) North Series, but as of right now we still do not have our big-block car so I’m not sure if we will make it to the first race of not.”

And there is still more as Ryan explained,“We’re also going to try to run a lot more DIRT shows as well as there are many special events in the area.”

On his racing past four seasons Jordan was a regular runner in the Southern Tier, but noted, “Danny Creeden and some other outsiders are tough, but if I wanted to get better I knew I would have to move on to somewhere else.”

For years he ran Bicknell, but after an accident he had to “throw it (the chassis) away” he went looking around for other ideas.

He explained, “I met Jerry (Higbie) and he was a great guy. He has been a tremendous assistance to my program and I decided to go with that.”

Ryan Jordan is ready to go for 2018 and he will gain valuable experience behind the wheel and at different race tracks as he continues to move up in the racing ranks.